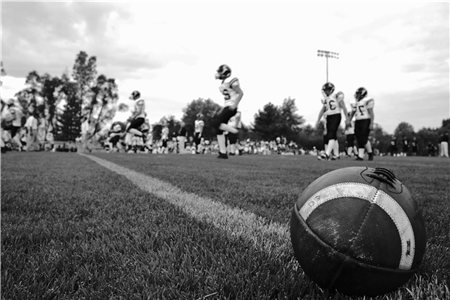 Opinions expressed are solely those of the author and do not reflect the views of Rolling Stone editors or publishers.

Storytelling is a universal way to engage an audience. It unites an emotion with an idea that helps us grasp the patterns of living. Universally relatable storytelling themes that dominate in entertainment include romance, family, rivalry and nostalgia — all of which prove to transcend time.

The film and TV landscapes have evolved over the past 15 years through technological advances, presidencies, social media and global movements. But a genre that has made little change yet continues to resonate with audiences the same today is the unscripted sports documentary series. While niche, this genre continues to draw in audiences time and again, year after year.

We’ve seen this ring true with Netflix’s new high school sports docuseries Titletown High, about a Georgia high school football team that tackles romance, rivalries and real life. The show has currently reached No. 2 on IMDb’s most popular reality sports-related TV series list, only behind Hard Knocks, the reality sports docuseries from the NFL and HBO. Titletown High comes after the success of Netflix’s 2019 hit Cheer, a different story following the same concept of youth sports reality television, and Last Chance U, an unscripted series following the lives of junior football players.

The creator of Titletown High, Jason Sciavicco was the person behind a seminal series of this hit genre 15 years ago with MTV’s popular show Two-A-Days. (Full disclosure: Jason Sciavicco is a client of BurgerRock Media.) In 2006, American audiences got their first real taste of a reality series based on high school football. It was the real-life version of the classic film, Friday Night Lights.

Two-A-Days, which means two practices per day, was a popular hit that aired for two seasons on MTV. The show introduced viewers to Hoover High School in Hoover Alabama, offering an uncensored, raw glimpse into the high school football team’s players, their parents and coach Rush Propst.

When the Valdosta High School football team hired the controversial coach Rush Propst to lead their team to victory in 2020, Sciavicco took advantage of a strikingly similar opportunity that he had capitalized on 15 years prior. The universal storytelling themes were once again in place for a present-day version of a high school sports docuseries. The natural drama that makes the storytelling of a sports team so compelling — whether it’s making the team, fighting for your position or dealing with a huge win or devastating loss — a Two-A-Days 2.0 version would naturally bring the drama to the present day.

The Rolling Stone Culture Council is an invitation-only community for Influencers, Innovators and Creatives. Do I qualify?

An interesting adjustment that becomes a benefit behind the scenes when producing the same story for a new generation is the pervasiveness of social media. In 2006 when the Two-A-Days docuseries aired, we saw the advent of Facebook and the launch of Twitter, with Instagram shaking up the scene four years later in 2010. Today, according to 2018 findings from AACAP, two-thirds of teens have their own mobile device with internet capabilities and 90 percent of teens say they have used social media.

With teens today living in a social media world where every little thing is documented, this norm translates from behind the scenes to being on film when television cameras become a part of their everyday lives. What once took about three weeks of getting used to the cameras with kids back in the 2000s now takes just a few days. This is an added bonus to the rawness of unscripted storytelling. Audiences these days are so smart and can see right through anything fake. To captivate an audience, your characters in the story have to be relatable, and kids today are already so used to being themselves in front of cameras that their authenticity is inevitable.

Having a storytelling formula that is universal and timeless can be a simple guarantee of success. When a story is universal, it deals with the raw and real emotion of everyday hardships. And when a story is timeless, it incorporates an element of nostalgia that resonates with generations. If you can inject both into your story, your audience will take notice.

To tap into this kind of universal storytelling, pairing authenticity with real representation to engage audiences starts with knowing your characters off-camera. If you can truly understand who your characters are and what their lives are truly about, you’re able to tell their story in a real, organic way.

Storytelling using real sports and unscripted characters is difficult. With sports docuseries, there is no script and there are no do-overs. There is the pressure that comes from anticipating and capturing all of the real emotions as they happen. As a storyteller, you must shoot as much footage as possible and pull out the scenes that capture the essence of what athletes endure, which is the pressure of the game and life beyond it.