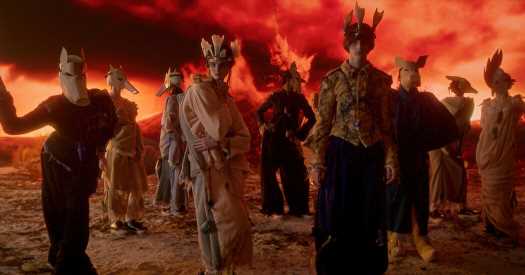 PARIS — Well, that was a plot twist no one could have foreseen. The very last show of the newly back-in-person couture week — the show that would have been (will be, when it happens) a historic show, because it would have been the first official couture show from a Black American designer — the Pyer Moss show, scheduled on Thursday in Irvington, N.Y. and livestreamed to Paris, ended up, after three hours of bated-breath waiting, being postponed. Because of rain.

“Above couture, above Paris, above fashion, is safety,” announced an M.C. from the Pyer Moss team as guests, in person and online, watched the floods pour down on the runway. It could have been the epitaph for the week. The year?

(The Chambre Syndicale de la Haute Couture, which oversees the fashion week, announced that it was officially extending the couture schedule to Saturday to allow Pyer Moss to remain in the fold.)

Especially because, after three days of drum rolls about live shows and “The Return” — days when, admittedly, there was some anxiety about just how many actual breathing people were celebrating together, side by side, at the runways — both Fendi and Maison Margiela opted for the security of digital shows.

Which is to say: movie magic. Pass the Twizzlers!

In his second couture outing as Fendi’s artistic director, Kim Jones enlisted Luca Guadagnino (who, after his feature film on Salvatore Ferragamo, is increasingly looking like fashion’s go-to director) to help him capture his latest collection as it wafted through the heroic marble corridors of the Fendi headquarters in Rome.

There was opera in the background, a soft-focus romance in the air and models including Christy Turlington, Kate Moss and Paulina Porizkova like statues come to stately life onscreen. That’s a very Roman mythology, but also about as far as any story went, as the stars of this particular short were the clothes: the intricately worked mosaics of vintage fur (Mr. Jones used old pelts and pieces, rather than new skins) that included one bolero and gloves involving more than 80,000 pieces; boots and shoes with wedge heels in the same travertine and the same arches as the building; and sweeping gowns made to look as though they had been mined in Carrara. 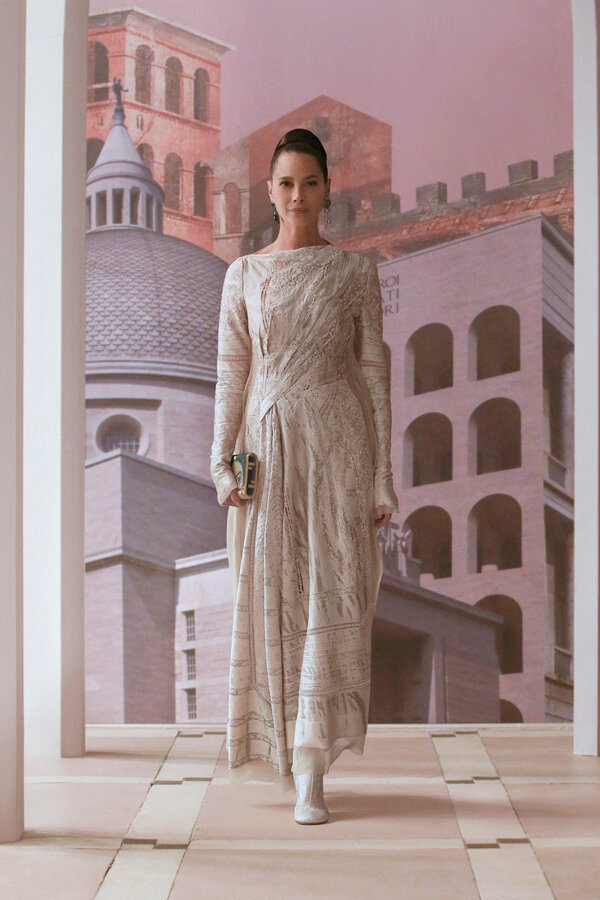 The result was less weighty than Mr. Jones’s previous couture for the brand, though it never exactly took flight. Mr. Jones is still going through the motions sketched out by his predecessor, Karl Lagerfeld, and there’s a certain dutiful nature to their expression despite all the handwork. It could be eye-opening if he took some risks.

John Galliano did, at Maison Margiela, throwing catwalk tradition to the winds with his presentation, a short gothic horror film by the French filmmaker Olivier Dahan inspired by the stories and characters Mr. Galliano makes up to conjure his collections (at least according to a sort of long-winded intro documentary).

There was a 19th-century fishing village, a ghost ship, a sea shanty. There was a crown of mirrored shards that summoned a supernatural pestilence. There was some sort of shadow vine regurgitated from a young lover’s mouth. There were 100 years that passed. There was another community, with a seer. There was dancing in shirts and underwear, animal masks and ritual. There was a third age, and a modern young woman who donned the crown and became the cursed queen. There were some strobe-like effects and a blood moon.

Some of it was gorgeous. Some was silly. (Hey! it’s gothic horror. Silly is part of the point.) A lot of it was hard to follow. But there were also pretty amazing clothes, when you could see them.

That’s what the first part of the movie was about (though to be fair it would have made more sense as a postscript, rather than a prelude), as the designer talked through the painstaking experimentation and hours that went into creating the outfits: the jackets and dresses spilling wadding made from deadstock and upcycled fabrics, initially made eight or 10 times larger and then shrunk via enzyme and acid wash to mimic the effects of time and tide; the sweater made from piecing crochet “Delft” tiles (the palette was very Dutch renaissance); the giant overcoats with old newspaper clippings sewn into their skins like patches of the past. The sorcerer’s dress made from shards of mirror, the sack dresses and a voluminous lace and silk gown. The thigh-high tabi clog waders.

Was it couture or was it costume? Like all clothes, a bit of both.

It was, Mr. Galliano said in his intro, about “anxiety, the power of nature, and when faced with that, how helpless we are.” It may have been fiction, but there was no arguing with the truth of the concept.

Just ask anyone who went through the last year. Or Pyer Moss.