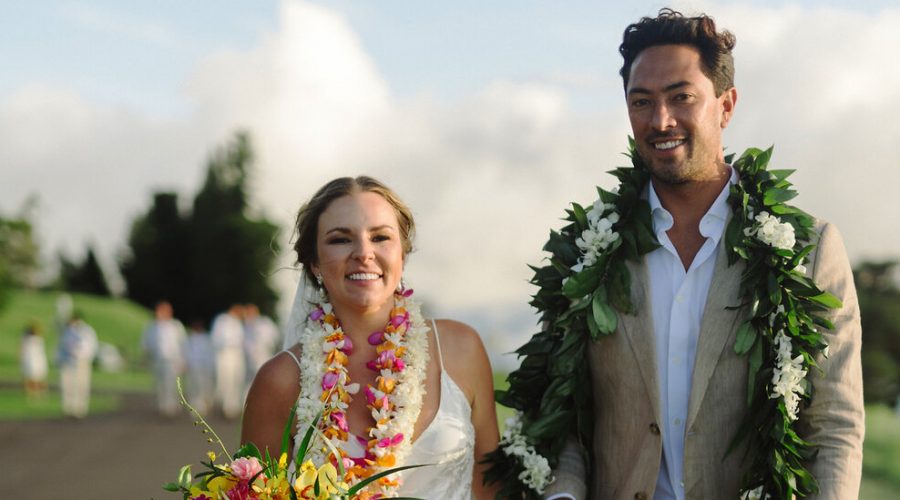 A wedding in Hawaii usually conjures images of sandy white beaches and clear blue waters. But Alexa Wilhelm and Ikaika Sarme opted to marry at Kahua Ranch, a working cattle ranch on the Big Island, instead.

“We wanted something that felt more like the Hawaii Ikaika knew growing up,” Ms. Wilhelm said. “We wanted a place that showed the Big Island countryside, a place that most of the guests are likely to never see,” Mr. Sarme said.

Ms. Wilhelm, 28, grew up in Newport Beach, Calif., where the couple now lives. Mr. Sarme was born on the Big Island in Hawaii, though moved to Newport Beach when he was 6.

Mr. Sarme received an associate degree in aviation sciences at Orange Coast College and is employed as a certified flight instructor out of John Wayne Airport in Orange County. “Once I have reached 1500 flight hours, my goal is to work for a major airline and eventually fly internationally,” Mr. Sarme said.

After meeting through mutual friends at a Halloween party in Newport Beach in 2016, Ms. Wilhelm said she “friend requested him on Facebook, after figuring out how to spell his name.”

Two weeks later, they went on their first date at an In-N-Out Burger in Costa Mesa. “We ordered it to-go and ate back at the house. I like to eat my Double-Double in private so I don’t look like a monster in public,” Mr. Sarme said. (Ms. Wilhelm described him as someone who “had no cares” and “long surfer boy hair.”)

After 11 months together, he moved into her parents’ Newport Beach home with her and they lived there for about three years. “It’s a very supportive environment,” Mr. Sarme said of the household. “We were both in school — nursing and pilot — and just could not afford to live in Orange County without taking a huge loan out,” Ms. Wilhelm said.

In 2019, they were in Paris for the New Year’s holiday. “One day we rented a tiny little car and drove out to the countryside. After champagne tasting and eating sandwiches in our little car, Ikaika asked me to walk up this little hill,” Ms. Wilhelm said.

“I had a hard time convincing Alexa to walk further because we were running late and she didn’t want to get charged extra on the rental car,” Mr. Sarme said. But follow she did and that’s when he proposed. “I don’t remember a single word I said, but I was crying.”

118 guests joined them for their Kahua Ranch wedding on Aug. 27. Local regulations required anyone flying in to Hawaii to be vaccinated or get tested for Covid.

“Just before I walked down the aisle with my dad, Tom gave a Hawaiian blessing and blew the conch shell,” Ms. Wilhelm said. “The Big Island has a lot of mana, and if you have a ceremony of any kind, it’s good to set the intent with some positive Hawaiian prayer,” Mr. Sarme said.

The ceremony was on the lawn, with the reception on the lanai and dancing in the barn. “You see tractors and other farming machines as you drive up and then nothing but rolling hills, animals, and rustic buildings,” Ms. Wilhelm said.

The sit-down dinner featured a fresh Hawaiian menu, including pitaya caprese skewers, seared ahi on ‘uala and kalo chips, Kalbi ribs and assorted malasadas, “with ingredients sourced directly from the island,” Mr. Sarme said. The “guest book” was one of Mr. Sarme’s surfboards, and the caterer made a special hot sauce as wedding favors.

After the ceremony, they finally had “time to soak in what was happening,” he said. “And the sunset was awesome.”

24/09/2021 Fashion Comments Off on A Hawaiian Wedding, Complete With Tractors and Cattle
Lifestyle