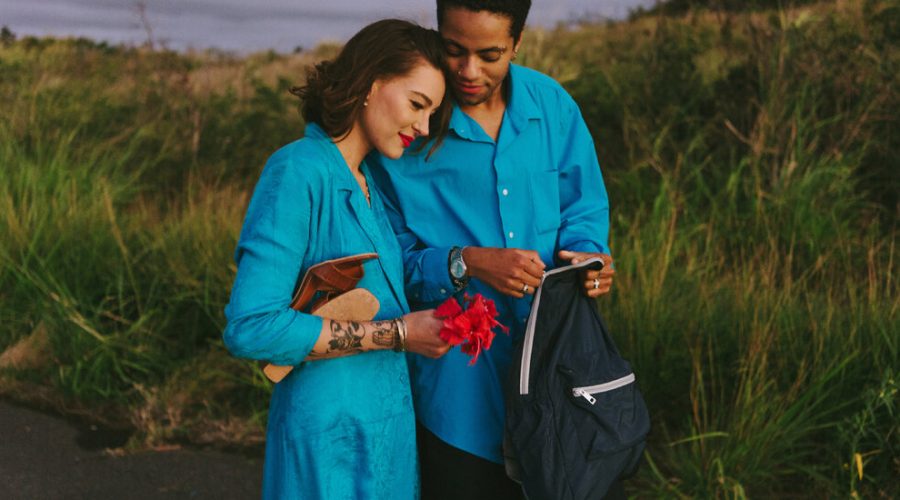 The soundtrack of Emily Margaret Shakeshaft’s childhood became a means of comfort and grounding as she grew older. One of the songs in that soundtrack that her mother curated was “Babyfather” by the Grammy Award-winning singer Sade. As fate would have it, Sade’s transgender son, Izaak Theo Adu-Watts, sang on that track, and, on April 16, Ms. Shakeshaft married Mr. Adu-Watts.

It’s no wonder that for Ms. Shakeshaft, being with Mr. Adu-Watts feels like coming home.

The couple initially met in May 2019 through Instagram. Ms. Shakeshaft began following Mr. Adu-Watts on the app in 2014. “Just out of curiosity,” Ms. Shakeshaft said. In 2019, she messaged him.

“I didn’t know anyone transgender and I’ve not seen anyone go through that process,” Ms. Shakeshaft said. “I come from a very conservative area and went to conservative schools and it was never really talked about in positive ways.” Watching him go through the process, she says, made her realize it wasn’t something people had any reason to judge.

“I actually initially messaged him to congratulate him,” she said. “I was so proud of him fighting so hard to get to where he is now. I consider myself a straight woman so it’s also something the straight community needs to understand, when you are trans, you are that gender not something separate.” 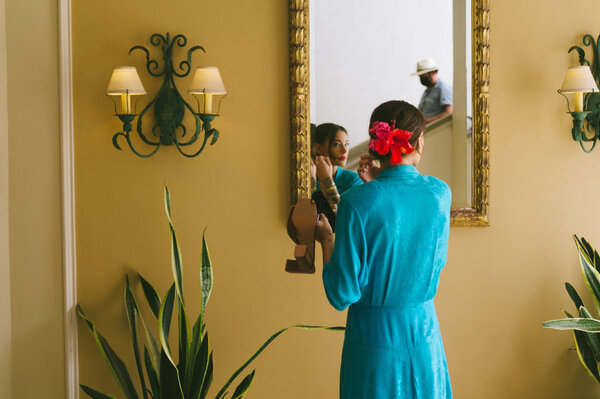 Mr. Adu-Watts responded to her message minutes later. “The back and forth of FaceTime and messaging went on until Nov. 13, 2019, when Mr. Adu-Watts finally flew from England to Fresno, Calif., so the pair could meet in person. “He ended up moving in right away and since that day we’ve stayed together,” Ms. Shakeshaft said.

Ms. Shakeshaft, 24, is a hairdresser and artist from Fresno. Mr. Adu-Watts, 24, is a model and artist from London. They currently reside in Fresno. “But we travel quite frequently overseas to visit our extended families,” Ms. Shakeshaft said. “His parents and family and my father and family are all overseas.” (Her father, Eric Shakeshaft, lives in Lithuania. The groom’s mother and her partner, Ian Watts, live in England. Mr. Adu-Watts changed his surname to reflect the role Mr. Watts, whom he considers his father, has played in his life.)

Their trajectory may sound impulsive. But when Ms. Shakeshaft met Mr. Adu-Watts online, she knew she wanted him to be in her life. “Still I never really imagined we would get married because it all seemed so far-fetched,” she said. “But once Izaak flew to the States to essentially profess his commitment and love, I was hooked in.”

“I knew I wanted to marry this person when I saw how seamlessly he fit into my family and how easily he became part of my life,” she continued. “It was as though he has always been a part of my life, especially through his mom’s music. When he came into my life, it was like my heart was full and complete finally. Everything about him is familiar and easy to me.”

In May 2020, the couple got engaged. Ms. Shakeshaft and Mr. Adu-Watts were listening to music and looking at some vintage books when they began talking about a conversation Mr. Adu-Watts had with his parents the day before.

“He had talked to them about being pretty sure he wanted to marry me and wanted their thoughts,” Ms. Shakeshaft said. “They were very supportive.” After discussing the conversation the pair said it made them feel like they were already engaged. “So we busted out our Stick and Poke Tattoo Kit, and he tattooed his initials on my ring finger and, alas, we were engaged,” she said.

Helen Folasade Adu, known to the world as Sade, saw a kindred spirit for her son in Emily. “She’s an independent thinker, she’s funny and beautiful,” Sade said. “Since I’ve gotten to know her and a little of her history I see she’s had a big life ’til now, in the same way Izaak has, and not always easy. What I love most about her is her empathy. There’s no formula when it comes to the heart. It’s mostly impossible to explain. I think Izaak and Emily were bound to collide like two seabirds on the wind.”

The pandemic put a kink in the couple’s wedding plans. “It was all rainbows and unicorns and then Covid hit,” said Hannah Chapman-Serimian, Ms. Shakeshaft’s mother. They were hoping to elope in New York on Nov. 13, 2020, a year to the day that they met in person. But Mr. Adu-Watts was working in England at that time and, because of the Covid travel ban, he was unable to travel to the United States.

“So I spent July through December of 2020 going back and forth to England to be with Izaak,” Ms. Shakeshaft said. “He finally was able to get back into the country at the end of January 2021 due to a medical waiver.” It was quite the experience, having one’s partner stuck in a different country in the middle of a pandemic, Ms. Shakeshaft said. “But we made it. And, although Covid sucks and really redirected our plans, I’m grateful for the growing pains.”

The couple chose Hawaii for their wedding and what the pair described as “the least traditional ceremony ever.”

“We decided to get married ASAP for so many reasons, but mostly because we are so ready for that step, and also for travel and documentation purposes so he or I never get stuck in a different country again and separated against our will,” Ms. Shakeshaft said.

They chose to stay at the Fairmont Orchid in Kailua-Kona, Hawaii, because, Ms. Shakeshaft said, she has many wonderful memories of being in Kona with her family. “We hadn’t ever stayed at the hotel but near it in the condos, and I wanted to start memories and share magic with Izaak as a new family unit there,” Ms. Shakeshaft said.

Neither family took issue with their choice. Sade said, “I think it’s lovely that it turned out just the two of them, with Hannah, Emily’s mum, presiding, making their promises to each other. They plan to bring us all together in the future if they’re brave enough.”

The couple say their wedding day in Hawaii felt otherworldly. “The whole day felt like a dream,” Ms. Shakeshaft said. “Genuinely, it was just like if you were making a movie.”

The couple flew to Hawaii a few days in advance of their nuptials and stayed there for two weeks. Little advance planned took place — not even the exact location or the couple’s attire was decided on. “I’m a very last minute person,” Mr. Adu-Watts said, “I trust that things will work out.” In the end, it all did.

Ms. Shakeshaft failed to get the dress altered that she had intended to wear so instead she wore a vintage blue dress she plucked from her mother’s closet the day before leaving for Hawaii. She tucked flowers in her hair sourced from around the resort property. Mr. Adu-Watts found a shirt to wear in a thrift store the day before their trip, which coincidentally matched Ms. Shakeshaft’s dress.

The couple met their photographers in the lobby of the Fairmont on the afternoon of their wedding and wandered around the area. They landed at a little cove just near the resort rarely frequented by other guests. “It was beautiful. Magical,” Ms. Shakeshaft said. “We stood in the water and took a minute to get oriented.” They decided to do the ceremony standing in the water.

“We literally stood in the sand and in the ocean in the space on earth where Emily has walked her whole life,” said Ms. Chapman-Serimian, the founder of Boxy Girl, which sells acrylic organizers and skin-care products. She wore a thrift-store dress found the very same day Mr. Adu-Watts found his wedding day attire.

Before the wedding, Ms. Chapman-Serimian had reached out to family members and collected well-wishes that she read at the ceremony. “I knew I would be feeling some kind of way,” Ms. Shakeshaft said, “but I didn’t expect to be so emotional.”

Ms. Chapman-Serimian who was ordained for the event through American Marriage Ministries, said she was both honored and surprised the couple asked her to perform the ceremony. “Izaak came to me and said, ‘We want you to officiate,’” she said. “It took my breath away. I’m not usually someone who is at a loss of words.”

Although they missed their families, the couple said they felt their presence just the same, as they communicated via FaceTime and by phone throughout the day. “Wherever I am, I always feel like my mom is with me,” Mr. Adu-Watts said. “Just the day before we got married we were driving into town and right in front of us was a license plate HFS444. My mom’s initials, Helen Fuller Sade.” Through his life, his mother had told him, “I’m always with you,” Mr. Adu-Watts said.

After the ceremony, the couple took their own photos in a variety of locations. Mr. Adu-Watts said he planned to print out many of those photos. “I’ve always wanted to have my own house with photos of me and my wife,” he said.

Fine Feathered Visitor The couple kept their hotel suite doors open to listen to the waves crashing against the shore. The morning before the wedding, a yellow-billed cardinal flew in, “and said hi and left,” Ms. Shakeshaft said. “The day of the wedding he came in again and hung out and we fed him crumbs. It was the sweetest thing. Yellow-billed cardinals are said to represent domestic harmony and loyalty.”

Concierge to the Rescue The couple had no plans or reservations for a post-ceremony celebration. But the hotel concierge arranged for a small table jutting out into the sea just outside the hotel. Leis for the group and a haku lei, or floral crown, for the bride awaited them there. “They put so much intention into that spot,” Ms. Shakeshaft said. “They had leveled it and put flowers out. We shared a wonderful dinner and talked about the day. The restaurant had closed, so it was just us.”

Misty Moments The day of the wedding the sky was moody and rife with clouds. “It started to lightly mist, which is good luck when you tie the knot because it makes the knot tighter when it gets wet,” Ms. Shakeshaft said. .