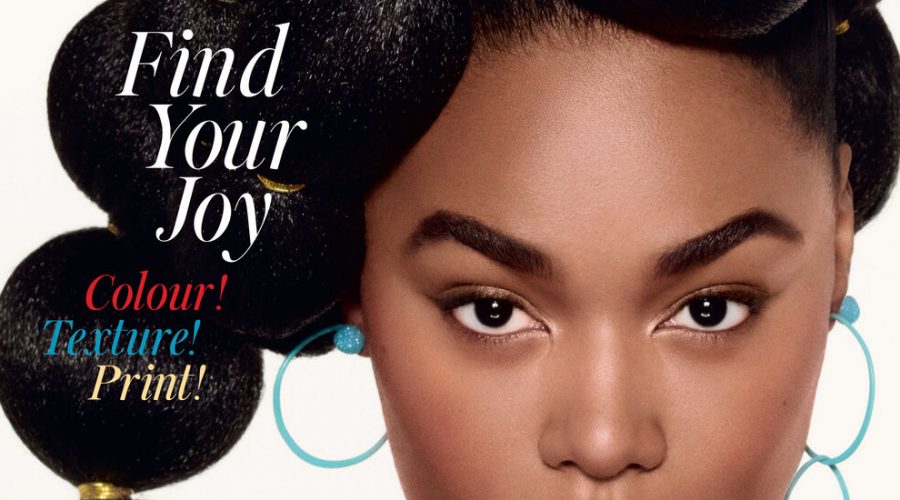 On the last Friday morning in August, the website for Harper’s Bazaar magazine led with an image of a Black model smiling widely in an Hermès gown, her hair in dreadlocks. Beneath that was a portrait of Lil Nas X and, just below it, an assemblage of stories about Aaliyah’s personal style.

The magazine’s most recent print cover featured Beyoncé, photographed by a Black photographer, Campbell Addy, and styled in part by Samira Nasr, who in 2020 became the first person of color to lead the publication in its 154-year history. (This was also Beyoncé’s first Harper’s Bazaar cover in a decade; she was last photographed and styled for the magazine by two white men known for selling images that resemble soft-core pornography.)

None of this is lost on Nikki Ogunnaike, who was named digital director at Harper’s Bazaar in November. Nearly 15 years ago, when she began interning at fashion magazines, she grew accustomed to being one of two Black people on staff, she said.

Now she moderates panels during such initiatives as Hearst Magazines’s recent three-day series highlighting Black talent in fashion. (Did she have access to similar programming early in her career? “Absolutely not.”) Now, when looking to fill entry-level positions, she scouts graduates of historically Black colleges and universities far from New York City. (“I don’t think 10 years ago that people were running to H.B.C.U.s,” she said. “They weren’t running to U. Va., where I went.”)

But the question remains: When it comes to magazines, will the change Ms. Ogunnaike has witnessed, accelerated in 2020 by the murder of George Floyd and the social unrest that followed, be lasting? Will fashion, with its history of bias and exclusion, fall back into old patterns of treating racial progress as a trend, or will it truly embrace systemic reinvention?

The conversation around magazines’ diversity problem is perennial. In September 2018, for example, Black women covered a majority of top titles. But by 2019, the models on those covers were less racially diverse, according to The Fashion Spot’s annual report.

Even now, there are signs that the imperative has waned. Earlier this year, The New York Times examined whether Black representation had improved in the fashion industry, including magazines, and encountered widespread reluctance from companies to engage with questions about staffing. Still, an analysis of nine major magazines — four international editions of Vogue, the American and British editions of Elle and Harper’s Bazaar, and InStyle — showed a surge of Black representation at the time.

That surge has gone sluggish. The majority of those nine publications used less Black talent for their covers in the six-month period from March to September of this year when compared to the previous six-month period that came on the heels of the summer of Black Lives Matter protests. (Two exceptions were Vogue Italia and Harper’s Bazaar, which used more Black talent over time.)

Even as Black leaders ascended to top jobs and turned content in a new, more inclusive direction, they weren’t typically able to make rampant new hires, or wipe out the staffs they inherited and start over. And because of fashion’s longtime exclusion of marginalized voices, the Black talent pipeline went underdeveloped for years.

“When it comes to Black leaders stepping into these roles, a lot of people expect changes overnight,” Ms. Ogunnaike said. “It doesn’t happen overnight.”

Chioma Nnadi, the digital director and highest ranking Black editor at Vogue, called it a “slow and steady kind of journey.”

“Radical change actually is incremental, and changing the culture of a company or changing the culture of an industry — it takes a long time,” Ms. Nnadi, who stepped into her role last September after six years as the website’s fashion news director, said. “In order to make lasting change, it can’t be a box that’s ticked and forgotten about until there’s another crisis, or there’s another flash point in the news cycle.”

While Ms. Ogunnaike and Ms. Nnadi work for different publishing companies — each with its own diversity baggage — they feel a similar pressure at times, operating within traditionally white institutions.

Lindsay Peoples Wagner, who was named editor of The Cut in January, described in an essay published Monday “the specific kind of pressure to get it right at all times, at all costs, that comes from being one of the very few Black leaders of a publication, and the high wire can feel like it’s suspended above a pool of piranhas.”

And that’s the problem, as companies continue to grapple with their internal cultures more than a year after being called out for their shortcomings: There is an expectation that Black leaders alone will drive change. “I don’t think it should be up to people of color to shoulder the responsibility of coming up with the answers and the solutions,” Ms. Nnadi said.

New organizations like the Black in Fashion Council (of which Ms. Peoples Wagner is a founder) and the 15 Percent Pledge are demanding accountability from well-known brands and working to elevate Black industry professionals. But, Black leaders say, it’s white institutions that need to carry out the commitments to change.

“I would love to have white allies be asked: ‘What are your diversity and equity and inclusion efforts looking like in your space, as a white person?’” Ms. Ogunnaike said. “The onus cannot only be on the people who didn’t even create these racist systems to begin with.”

The top echelons of magazine mastheads — the titles with “chief,” “executive” or “director” attached — have remained predominantly white, with a few powerful exceptions. For example, under Edward Enninful, the editor in chief of British Vogue, more than half of the last 17 cover models were Black; under his predecessor, Alexandra Shulman, only two Black women were given solo covers in 25 years.

But there have been major appointments of Black editors outside of these mainstream fashion titles. The influential British indie magazine Dazed hired Ib Kamara as editor in chief in January. The beauty magazine Allure named Jessica Cruel to its top position in August.

This year has also seen the major ascent of Black models. Over the last 12 months of covers, one of the most in-demand models of any racial background was Precious Lee, who appeared on the all-important September issue of American Vogue.

This year also saw “the first cover I had with my actual name on it,” Ms. Lee said, referring to the May issue of Harper’s Bazaar, a magazine that, growing up, she associated with “all of those old pictures of skinny white women.”

Ms. Lee is a Black model from Atlanta whose clothing size varies from 14 to 16. That range is just about average for an American woman but generally categorized as plus size in fashion.

While the relevancy of magazines has been called into question over the last decade, Ms. Lee believes cover images still matter. They document history, reflecting societal changes and defining the public’s perception of beauty.

“This is something that I’ve been fighting for since I began modeling,” she said. “For me, it was always about transforming the imagery that we see around Black bodies, specifically African American women at a nontraditional size.”

Ms. Lee has also fought for more Black talent during photo shoots: people who understand how to light, apply makeup and style the hair of Black women. On the occasions she’s arrived to a set without any “P.O.C. people on the glam team,” she said, “I’ve had to put my foot down and say, ‘I’m not shooting with these people.’

“I never want to be involved in something that does not have an expansive crew,” Ms. Lee continued. “It just doesn’t make sense. I actually think that’s the reason I’ve been modeling for years and people may think I’m a new face. Maybe if I had been a little bit more concerned about ‘making it’ back then, without ‘making it’ in a way that I felt was true to myself — if I didn’t hold on to what I felt was right — maybe it could have happened earlier.”

Lacy Redway, a longtime hair stylist, said she’s had Black clients take on similar fights to get her hired on a cover shoot because they felt comfortable in her hands. Before 2019, she said, the only magazine where she consistently worked with an all-Black crew on a cover shoot was Essence, the Black women’s magazine. When working for other publications, she was sometimes the only person of color on set.

“That can feel lonely,” she said. “Someone might not understand your point of view or understand the challenges that you might be bringing up.” A photographer unfamiliar with box braids may not know that it will take more than two hours to style them, for example.

Recently she was hired to do braids for the September cover of W, and “because that was also an all Black crew, the photographer didn’t give me any issues about how long it would take,” she said.

Like other Black talent, Ms. Redway said she’s seen an uptick in work in the last year, which she attributed to magazines or advertisers responding to being called out, or being fearful of getting canceled. But the jobs haven’t receded over time, she said, which is a promising sign that change is here to stay.

“I just wish it didn’t have to come from a place of force,” she said. “I want it to eventually feel more genuine, that the reason that these opportunities are happening for artists that are Black and of color is because they are deserving of the opportunity.

02/09/2021 Fashion Comments Off on At Top Magazines, Black Representation Remains a Work in Progress
Lifestyle