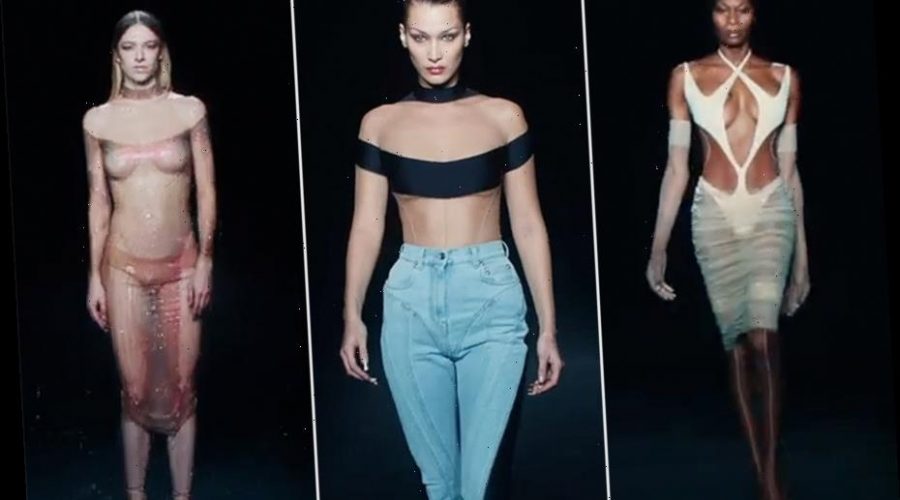 Mugler's Spring/Summer 2021 virtual show was not your typical runway presentation.

This was filled with unexpected catwalk moments from Bella Hadid, Irina Shayk, Hunter Schafer and Dominique Jackson as they modeled the brand's signature figure-hugging, super-sheer and barely-there garments.

The presentation opened up with Mugler designer Casey Cadwallader and Hadid, 24, sharing a laugh before he throws her into the air, so high she nearly disappears. When the supermodel lands on her feet seconds later, she proceeds to walk backwards in light-wash high-rise denim with navy side panels and a matching mesh cutout top.

Her unconventional runway walk sets the tone for the show (part two of the house's Spring/Summer 2021 presentation) which is filmed entirely in reverse.

Schafer, who stars in the HBO hit series Euphoria, is the next to appear on the invisible runway (seemingly out of nowhere). The actress, 22, models a quintessential dominatrixes-inspired Mugler look with large cutouts all over the bodice.

For Hadid's second pass down the runway, the star performs yet another acrobatic trick — this time, continuous back walkovers — with the help of some CGI magic.

At one point down the catwalk, Shayk suffers (what looks like a staged) stumble but recovers like the pro she is, modeling a black mini dress with thong-exposing panel cutouts.

The show concludes with Schafer walking in reverse all the way backstage where the rest of the models can be seen getting their hair and makeup done before the presentation.

"I've always wanted models to break into dance on the runway or to do something, but when it's a live show it's very risky," Cadwallader told Vogue. "The runway can be intense and scary, and the audience is often exhausted, but when you're doing a film you can mess around, play, and edit."

Mugler unveiled part one of its Spring/Summer 2021 collection back in October with a virtual presentation that evoked the same fantasy futuristic vibe, and even featured a 3-D avatar of Hadid.

"I wanted it to feel like[…]a very action-packed trailer," Cadwallader told WWD at the time.

"I was trying to use a lot of tropes from the Mugler heritage, but really smash them together with today," he continued. "That's a really fun challenge to try to rise to, you know: What is iconic today?"