The pins are in the hems, the sequins are being carefully sewn on and every nail, hair and jewel is being carefully polished and primped ahead of Sunday’s Brownlow Medal.

While many of the people involved in getting AFL’s biggest personalities and their partners ready for the event are mostly behind the scenes, the night presents a massive opportunity for the country’s bridal and couture designers to bank a few orders for the year ahead. 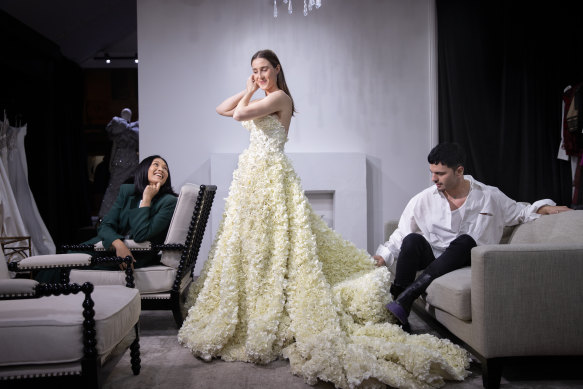 “The value of the Brownlow is always so good because it gets into so many people’s lounge rooms, more than the Logies does, or fashion week,” says Jason Grech, a Brownlow veteran who is taking a break this year to focus on his other business and family commitments.

Designer Con Iliopoulos is one such designer hoping this year’s Brownlow, the first to be held in its full capacity since the pandemic began, will help him catch up on the revenue he lost over the past few years. Iliopoulos, whose label Con Ilio's gowns cost up to tens of thousands of dollars, is making just the one dress, for Alexandra Bourne, the partner of Essendon’s Zach Merrett.

He says a good Brownlow outcome is about 10 to 15 “genuine” inquiries. “Even if you get two sales out of it, it’s fantastic,” he says.

Another designer hoping to capitalise on the Brownlow’s reach through its one-million-plus TV audience, as well as millions more on social media, is debutante Antoinette Fusillo. 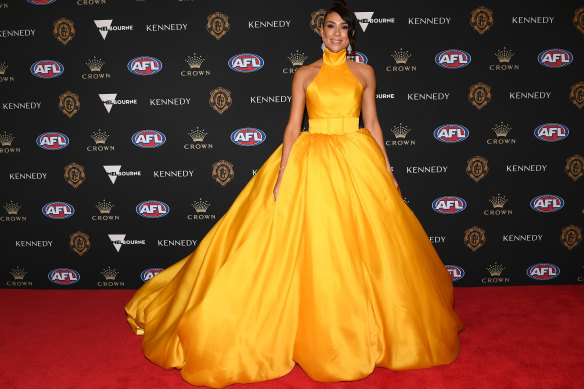 Ana Calle wearing Con Ilio at the 2019 Brownlow, the last time the event took place in all its glory.Credit:Getty

Fusillo, a designer of more than two decades’ experience, used to run the design team at bridal atelier Mariana Hardwick. Since going out on her own, mid-pandemic, she’s suffered numerous setbacks, including lockdowns and bouts of illness. “We have been playing catch-up ever since then,” Fusillo says.

She says the Brownlow is great for business, especially as Australia has so few mass-audience red-carpet events, but admits she isn’t across football. But when stylist Meggy Smith approached Fusillo to create a gown for Talia De Marco, partner of Brisbane’s Dane Zorko, she did her research to make sure it was a good fit. 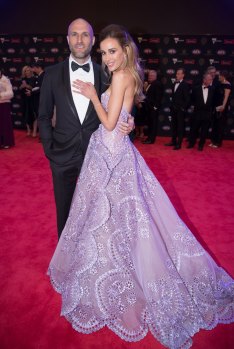 The one-time queen of the Brownlow red carpet, Bec Judd, with husband Chris, in 2018.Credit:Simon Schluter

“The way I justify [the investment] in my mind, not that you have a budget … working on events like the Logies and this has really shown that if it’s the right fit, there’s a direct impact in terms of [Instagram] followers and inquiries,” she says.

During COVID, the Brownlow was held remotely during the 2020 “bubble” season, and last year, only a handful of players attended in each state, with most partners sitting out.

One plus of the pandemic was designers learnt how to do virtual fittings, which has helped De Marco, who gave birth to a daughter, Giselle, 11 weeks ago. Despite the added challenge of motherhood, she’s excited the Brownlow is back.

“During COVID it didn’t feel as special, the impact of the red carpet wasn’t the same,” she says. “The past two years we pared things back. This year, we want to be bigger and better.”

Bourne says she was just 19 at her first Brownlow and has seen the event change dramatically over the five years she has attended, suggesting it’s much kinder than it once was.

“Every year as a community, everyone is growing, in terms of what’s acceptable. There used to be a worst-dressed list, that’s just unacceptable now. Everyone is interested in the gowns but also the sport and the talent that’s there,” she says. 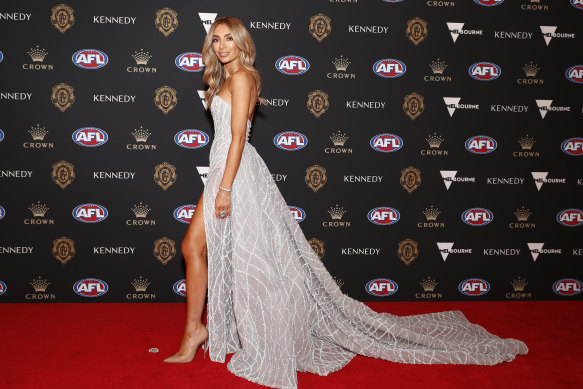 Revenge dressing … Nadia Bartel at the 2019 Brownlow after her split from ex-husband, Jimmy Bartel.Credit:Getty

Smith says she advises her clients to try their best to ignore any negative reactions that come through social media and just enjoy the experience. She doesn’t think COVID has dampened the public’s appetite for red carpet events. If anything, she thinks the opposite: the dresses and interest will be bigger than ever.

“There’s always such a mystique and allure of WAGS [wives and girlfriends],” she says, referring to the large aspirational factor. “It’s like you can touch it but you can’t … whereas maybe the Logies still feels very exclusive and far away.”

Stylist Lana Wilkinson often credits the exposure she earned from the Brownlow for “making” her career. On Sunday, she will dress Geelong skipper Joel Selwood’s wife Brit, who is pregnant with their first baby, and former North Melbourne coach Danielle Laidley and her partner, Donna Leckie. 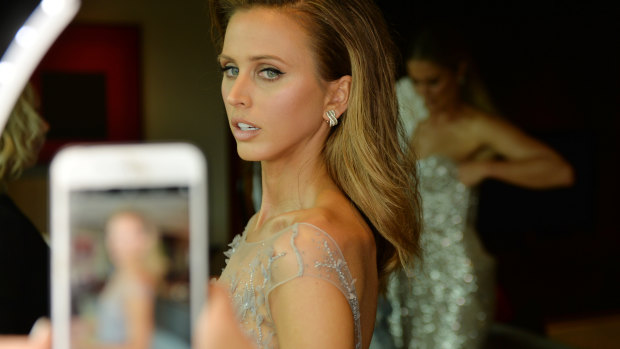 Brit Selwood, pictured at the 2019 Brownlow, is pregnant with her and partner Geelong captain Joel Selwood’s first child.Credit:Tanya Macheda

While the gowns are under wraps until Sunday, Wilkinson says ’90s influences are expected to feature strongly. “It’s one of the more fashion-forward red carpets on the calendar … a lot of the women attending have corporate jobs, they’re full-time mums. They’re happy to get dressed up … what we will get is a feast for the eyes. It will still be curated but it will have personality.”

Our coverage of the 2022 Brownlow Medal will kick off with a live blog from 5pm on Sunday, September 18.

16/09/2022 Fashion Comments Off on Bigger than the Logies: The true worth of a winning Brownlow gown
Lifestyle