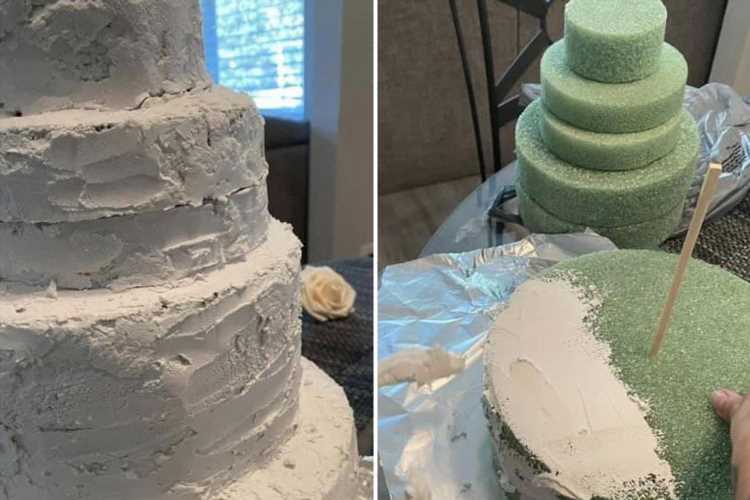 WHEN you tot up the price of the venue, flowers, outfits and food, there's no denying that weddings can be seriously expensive.

So we can't exactly blame anyone for wanting to save a few pennies where they can.

That said, one bride has been absolutely savaged online after she showed off her fake wedding cake made entirely out of foam and wall plaster.

Sharing photos of the process on social media, the anonymous bride-to-be wrote: "Anyone else try a fake cake with foam and wall spackle?

"I seen it on YouTube and they make it look so easy!! We aren't having a cake so trying to figure out something for looks."

But it didn't take long for her post to end up on Reddit's Wedding Shaming forum – where an unimpressed Facebook friend labelled it "tacky".

Questioning the bride's reasoning, they wrote: "Or just don't have a cake at all???"

"An artificial cake makes perfect sense for a window display or a photo shoot," one wrote. "For a wedding? Not so much…"

While others branded it "cheap", another added: "I’d be disappointed if I were a guest seeing the fake cake and looking forward to some of it and then not getting any!"

Meanwhile, a third wrote: "Wow this is the most wasteful thing I’ve ever seen."

However, one everyone so critical – and others said this was something they'd definitely try themselves.

"[She] stole my idea. Gorg fake cake. Take pictures. Take it to the kitchen to 'cut it'", one wrote. "Toss it in a dumpster and slice up a Costco cake."

Jumping to her defence, another added: "People like the look of a big cake but not the price tag. There’s nothing wrong with having a fake cake and serving sheet cakes, that’s actually really common. This is a bad look but they’re trying to save money."

For more wedding horror stories, this bride was fuming after eight guests got her a £35 wedding gift between them… but people reckon she’s the tacky one.

And this bride planned to serve guests just ONE McDonald’s Chicken Select for dinner at $10k wedding & people are horrified.

Plus this bridezilla demanded bridesmaids fit in size 8 dresses for wedding & orders them to the gym if they need to slim down.