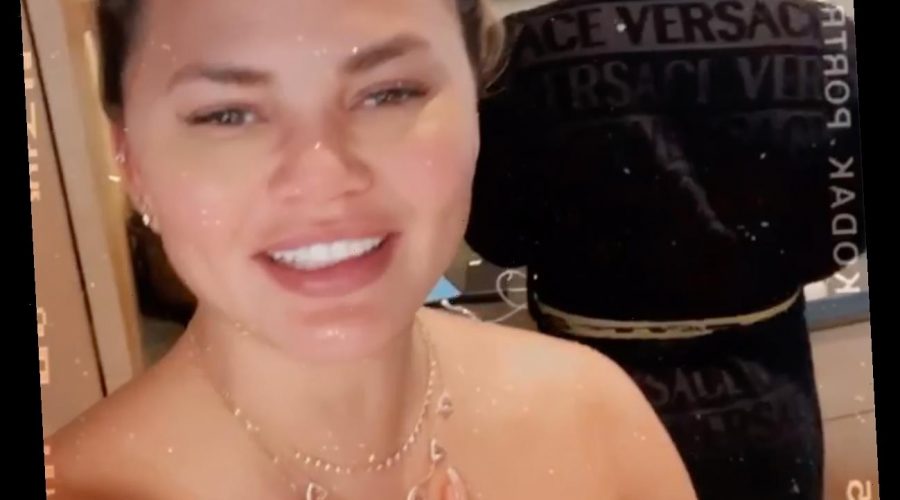 Chrissy Teigen and John Legend kept it comfy for the 2021 Grammys!

On Sunday evening, the cookbook author took to her Instagram Story to share that she would've gotten into full glam for the 63rd annual Grammys, had she known one of her musician husband's two nominations would be presented during the awards show instead of the pre-show.

A few minutes later, Legend, 42, was awarded R&B album of the year for Bigger Love — and Teigen, 35, couldn't contain her excitement, posting an Instagram Story of her celebrating in a bath towel. "John, you just won R&B album of the year! How are you going to celebrate?" she asked. Dressed in a bathrobe as the couple cooked dinner together, Legend jokingly replied, "By mincing garlic!"

After his win, Legend shared a heartfelt message on Instagram in which he thanked his "collaborators" and "entire team" for helping him create the R&B album.

Teigen, however, was not pleased that her husband didn't give her a shoutout in his post and hilariously trolled him on social media for the exclusion.

The mom of two tweeted a screenshot of Legend's post along with the message, "this motherf— ???? helloooo?? caption !!!!"

Teigen later shared several photos of her and her husband on Grammy Awards red carpets over the years, even commenting "lol so bad" on one of her past looks.

Despite being in a towel for Legend's pre-show win, the Cravings author made sure to dress up for the actual awards ceremony.

For the special event, which Teigen dubbed the "house grammys," the TV personality dressed in a black corset-styled dress with a fringe bottom while Legend sported a Versace robe and silk black pants.

In the pictures Teigen posted to social media, the couple's son, Miles Theodore, 2, is hilariously seen in the background waiting for his parents to finish their photo shoot.

Upon news that the Los Angeles Laker was killed in a helicopter crash in Calabasas that morning, along with his daughter Gianna, 13, the "You & I" singer and his wife mourned the NBA legend.