THE area under your stairs can be a useful storage room, small WC or handy pantry – or, if you do nothing with it, a wasted opportunity.

One couple, from Essex, were keen to make the most of the area under the stairs in their new build for some much-needed storage. 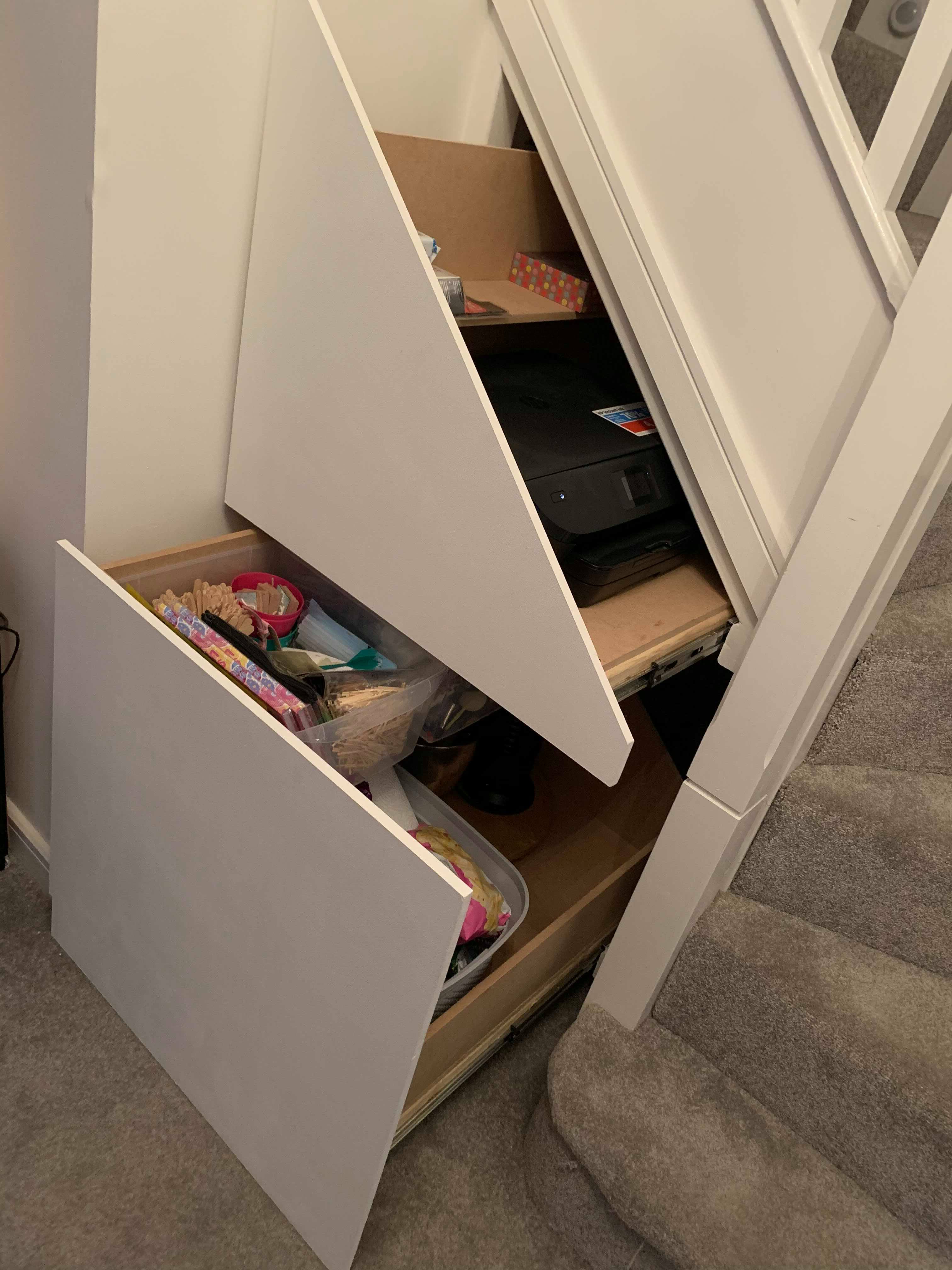 Juliana Beckham, 30, who works in a school, and James Beckham, 31, a grounds worker, parents of one little girl, were quoted £800 plus VAT for a professional to build in under-stair storage for them.

After receiving the eye-watering quote, the couple decided to do it themselves – and managed to achieve the project for just £80, resulting in a saving of £720.

Juliana told money-saving community LatestDeals.co.uk: "I got some quotes to build under-stair storage just before lockdown as we had just bought a house and I was concerned about storage because, as with all new builds, lack of storage is an issue, especially with all our little girl's craft stuff!

"The quotes came back at £800 plus VAT. Having just bought a house, that wasn’t an option, so after talking to my brilliant husband he said he could make it cheaper, something I didn’t think would ever happen as he has worked all throughout lockdown. 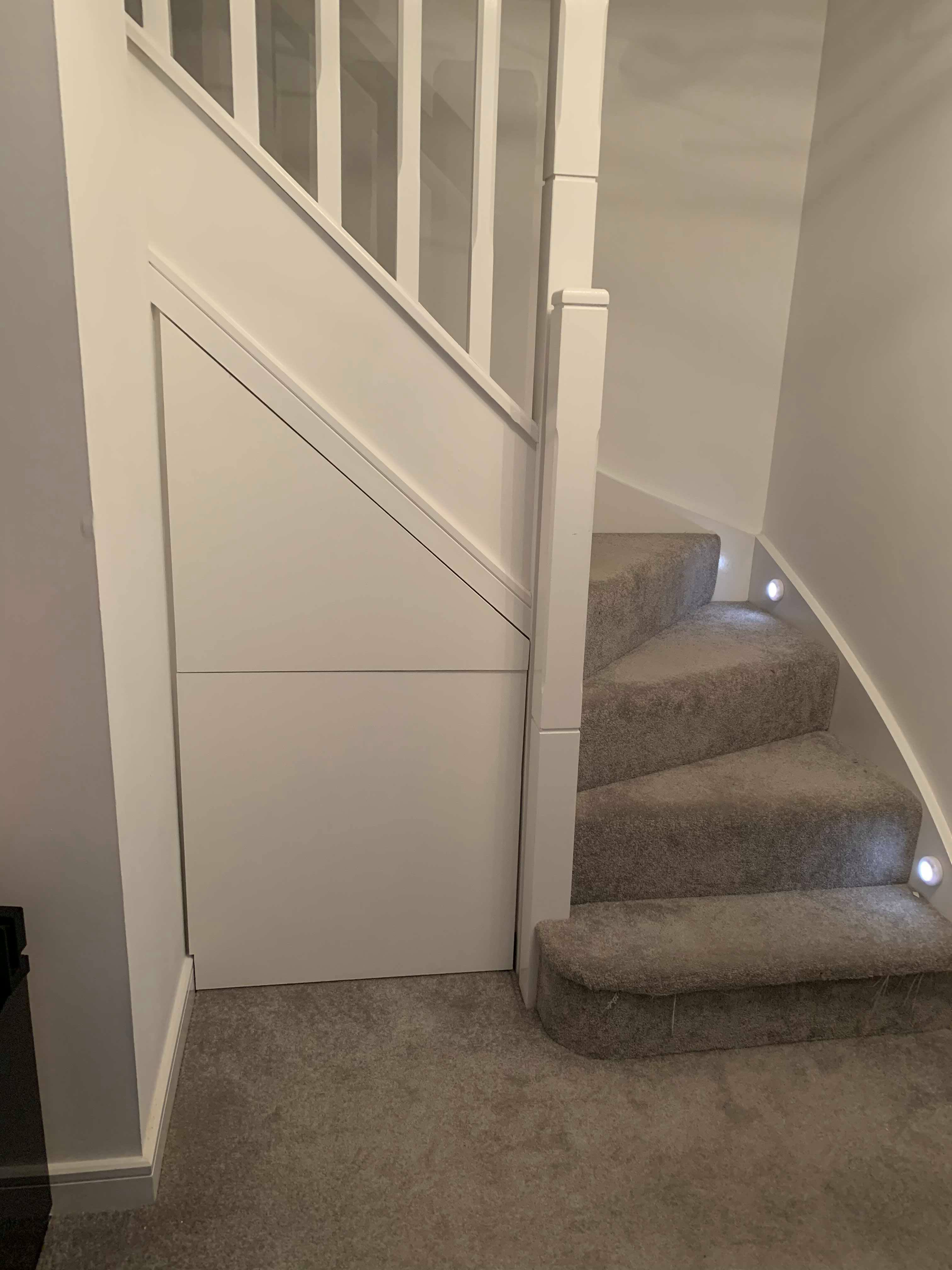 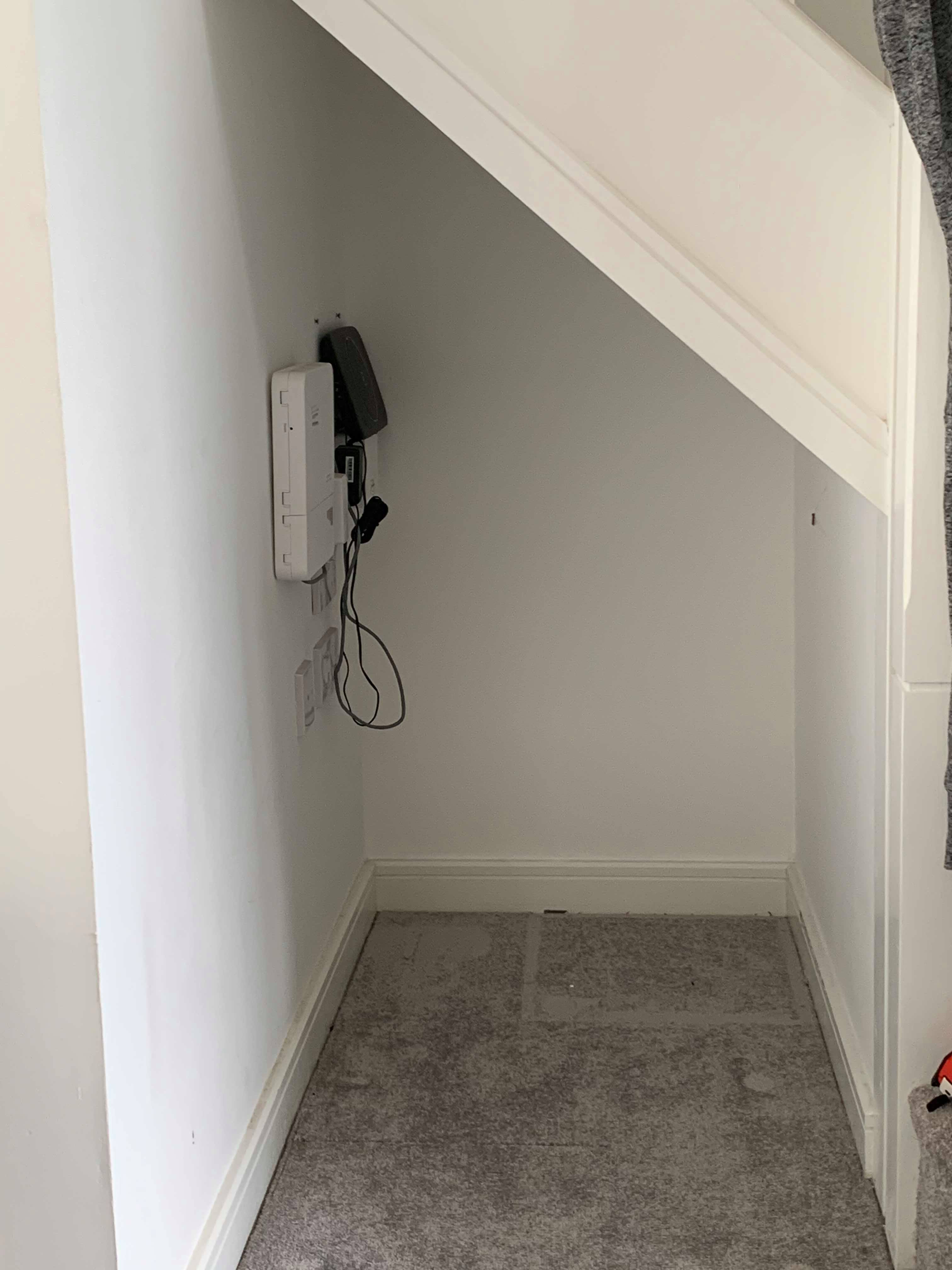 “He did some research to figure out if it was possible and decided he was going to give it a go.

“Then we went to B&Q and bought two sheets of MDF at £20 each. The timber from the framework he already had from a previous project but it’s fairly cheap to get hold of.

“We already had white paint that was in a gift pack from when we moved in.

"James started the project on a Sunday afternoon and then worked all week, but he did an hour here and there when he was home and it was completed the following Saturday.

“To achieve this, the first step is to measure. Then, you need to add the framework, add the runner and build the base of drawers.

“After that, we made the framework of the drawers, fixed the pop hinges, made drawer fronts and painted and made some last tweaks." 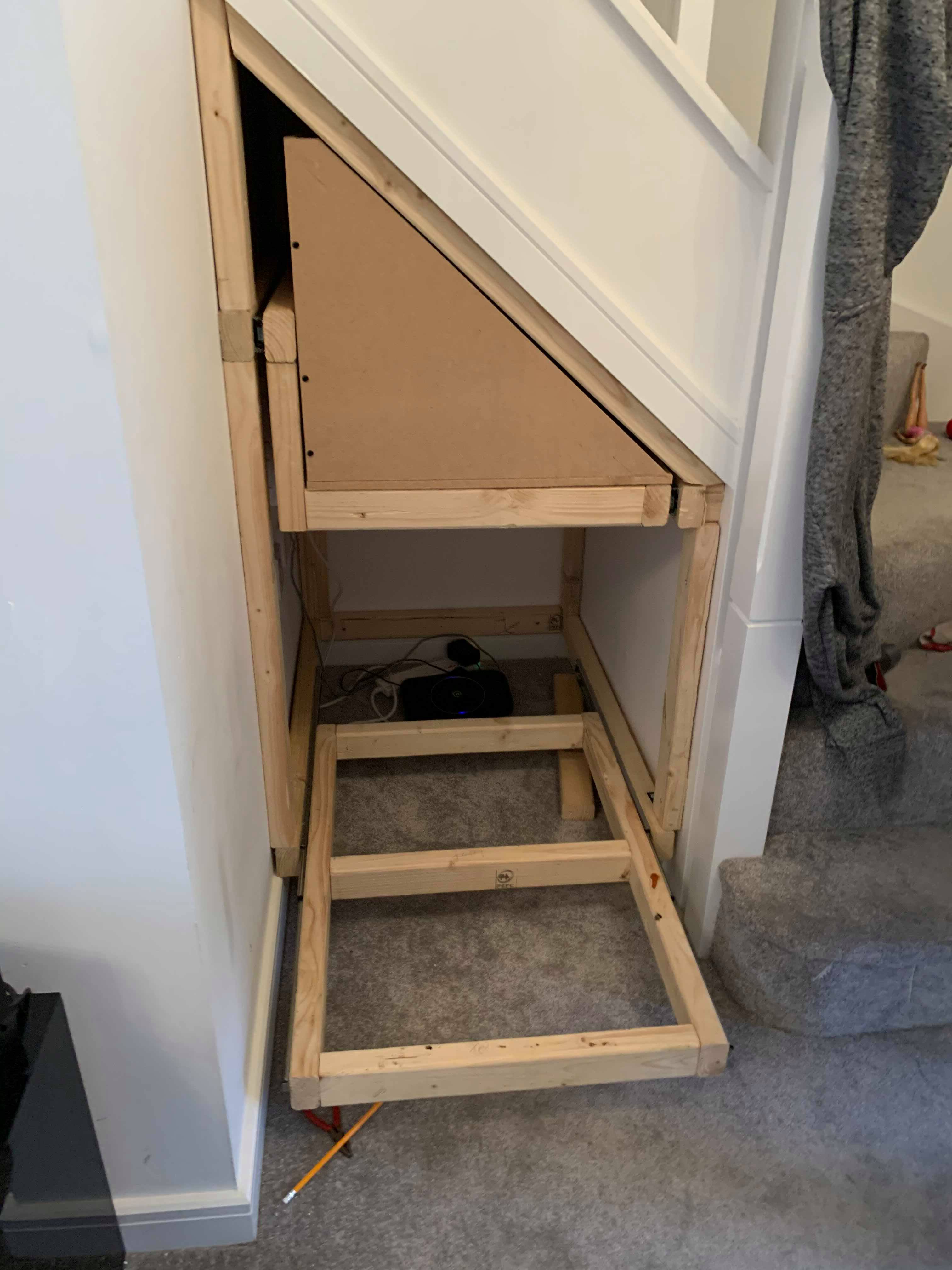 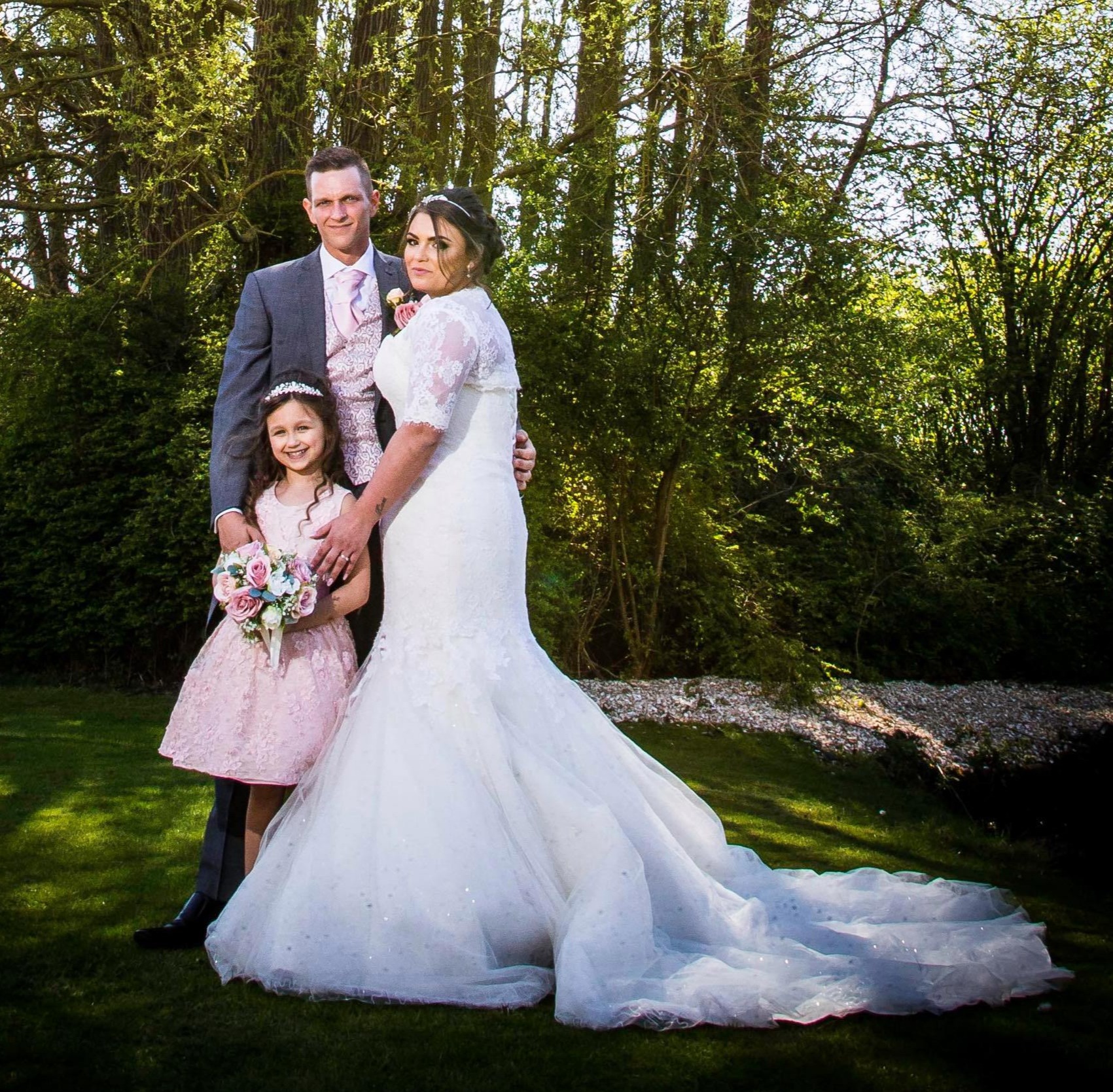 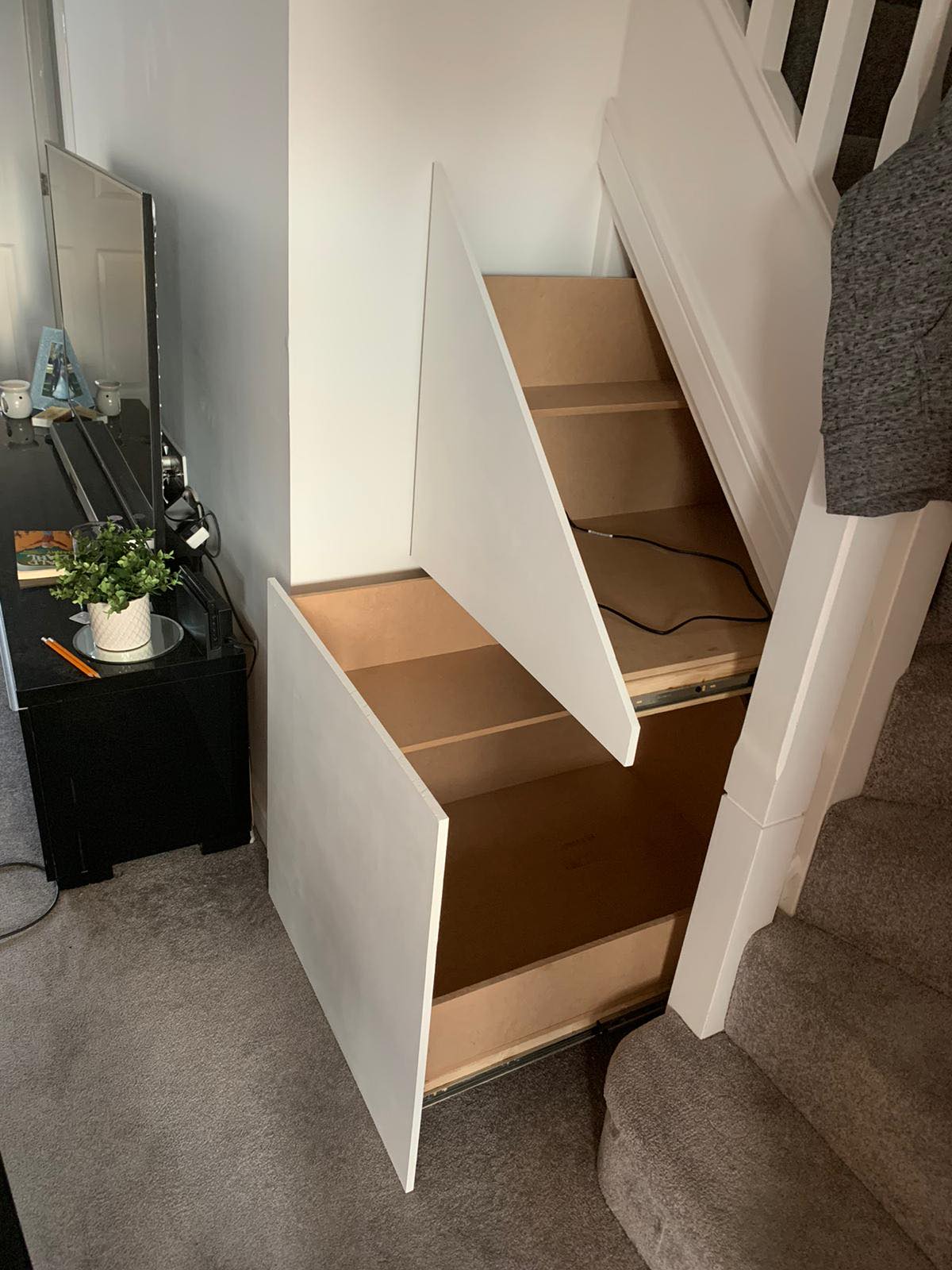 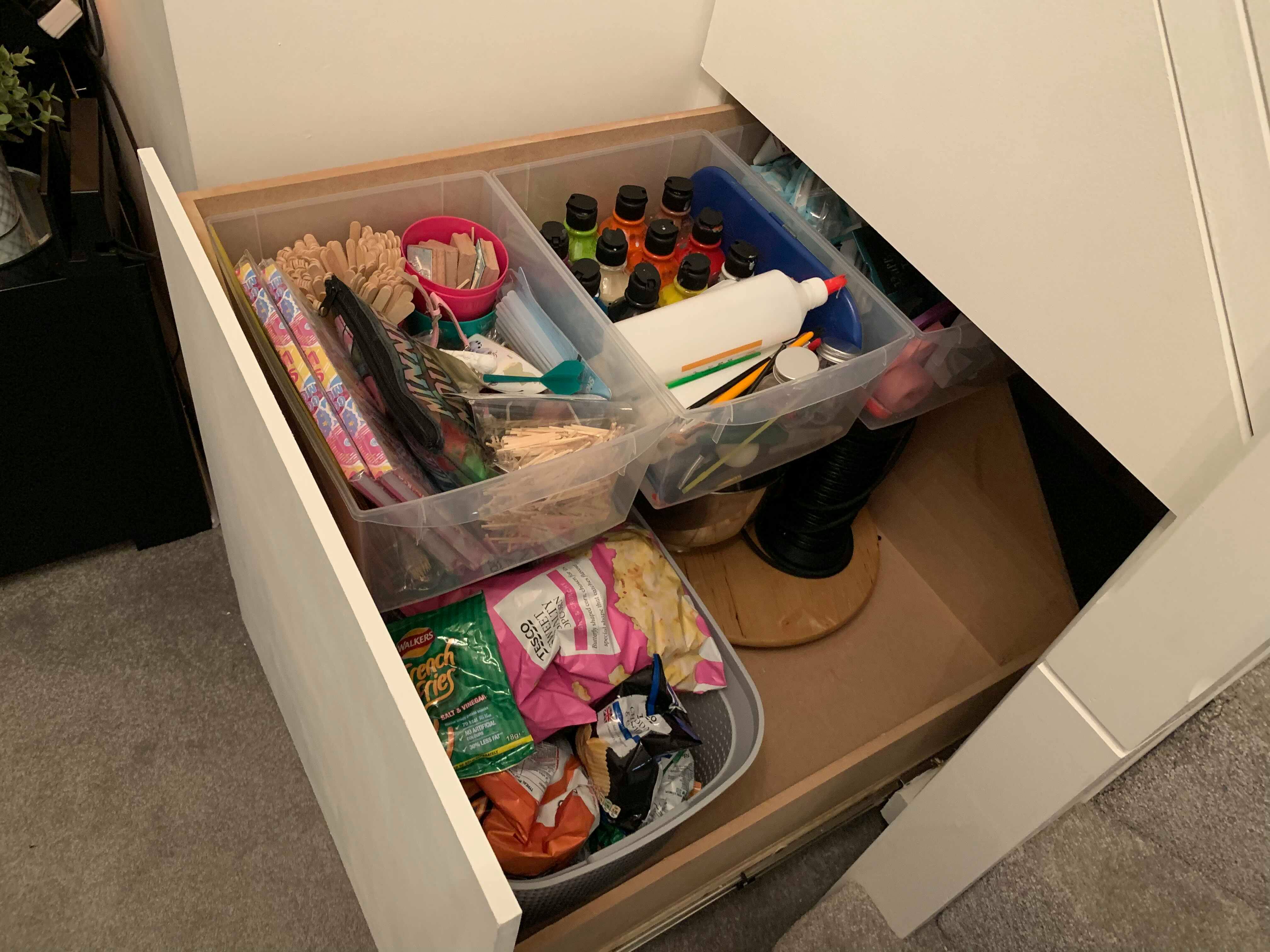 Juliana and James were delighted with how their project turned out – and especially given that it cost a fraction of what they were quoted initially.

Juliana added: "I am extremely happy with the results and rather impressed that he pulled it off so well.

“The unsightly mess of our little cubby hole under the stairs is gone and it’s been made into practical storage for all the bits you don’t want on show.

"James also attached an extension lead to the underneath of the top drawer and drilled a hole through the base to allow for power for the printer. 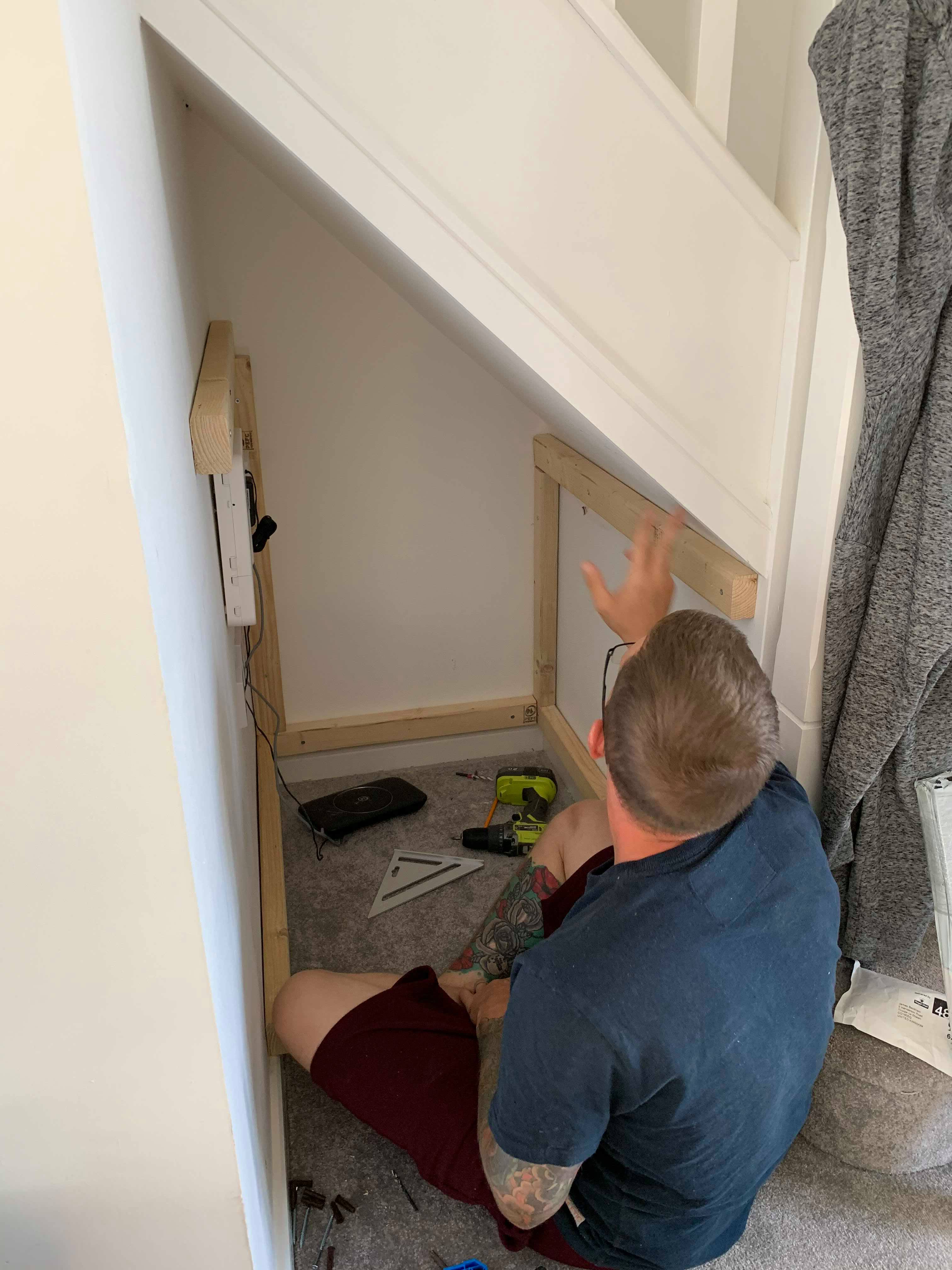 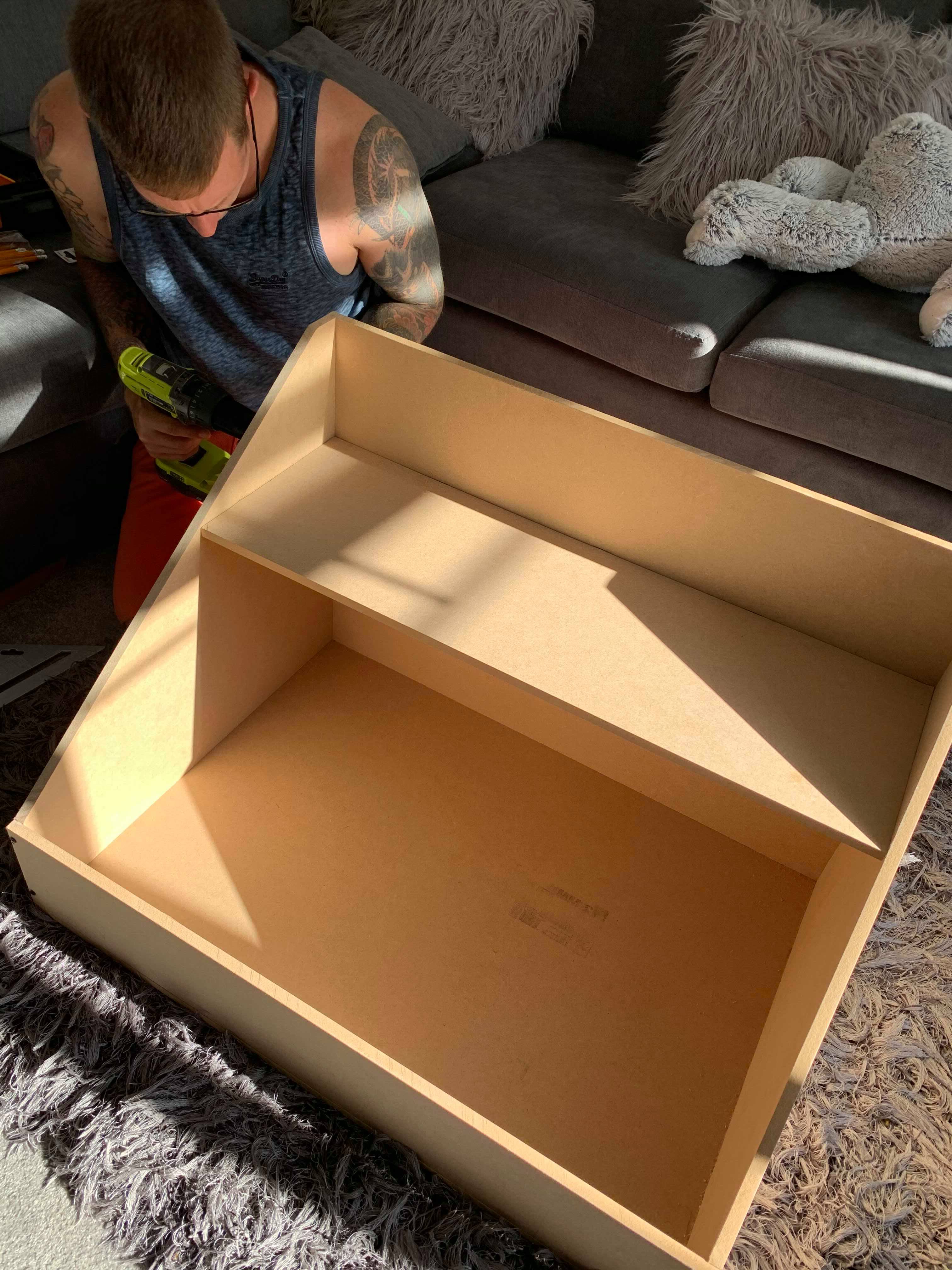 "Both drawers have a button should we need to take them out completely to get to the broadband and everything else under there.

"This has all been highlighted on our home Instagram page at @beckham_home, where we have documented all the projects for our new build with plans for other projects in the future.

"We started our Instagram as a way of keeping all of our photos and updates after buying our first home in April after renting for the last 10 years without bombarding our friends and family with boring photos.

“Since then it’s blown up with over six thousand followers – something I never expected in the slightest! 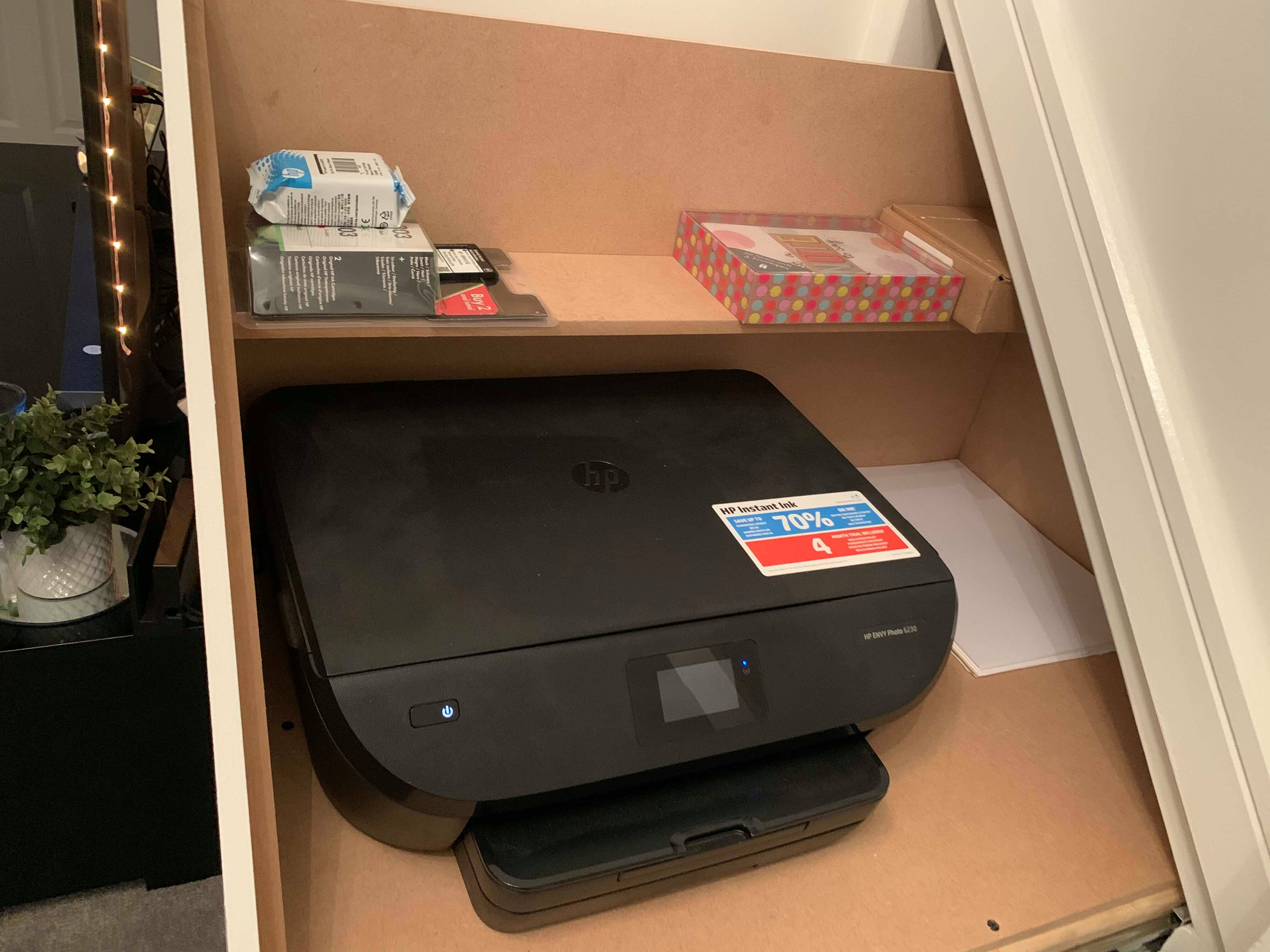 "I am thrilled about saving so much money and shocked how cheaply it could be done compared to the quotes we had received.

"James has done a fantastic job and I have had many people ask if I’d be willing to hire him out!

“The biggest tip we could give would be to get quotes and don’t be disheartened if it’s way more than you can afford.

“With a bit of research and a few tools, you're able to do it yourself.

“Also, a phrase my husband kept saying is 'measure twice, cut once’ – and also, be patient!"

We shared how a girl, 12, completely transformed her family home for £50 in seven days & she’s a dab hand with the power drill too.

And this woman made a stunning window seat for just £30 using leftover wood and cot mattress.