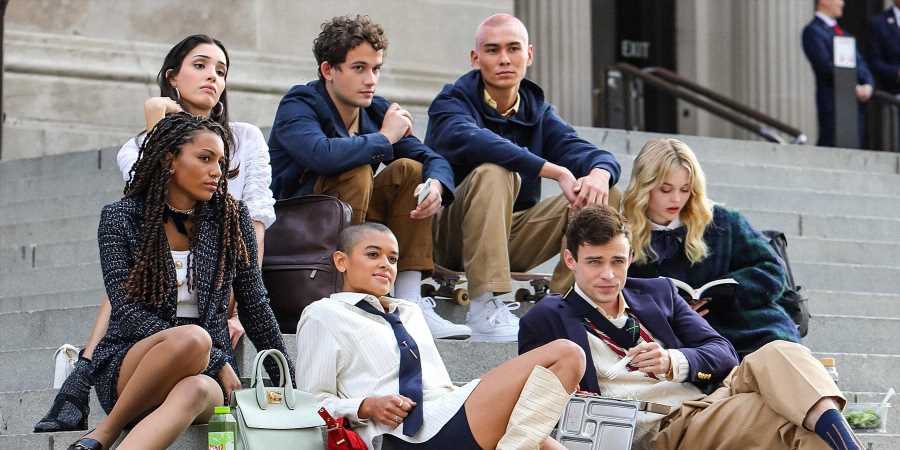 The original Gossip Girl ended in 2012, but that hasn't stopped fans from consistently talking about the show — particularly, the costumes — for years since. If you wear a headband, you're suddenly "channeling Blair Waldorf" and any plaid, uniform-like outfit brings back memories of the Met steps. That's the sort of legacy dreamed up by the talented costume designer Eric Daman. So naturally, when it came time to dress a whole new era of fabulous, rich, wild, and (now) "woke" teens for HBO Max's newest installment, the pressure was on.

"I was really boxing myself in and being like, 'Oh my God, how can I live up to this legacy?'" he tells InStyle over the phone, describing how he felt prior to the first Gossip Girl fitting, which was originally scheduled pre-pandemic. "The viewers and the fans have such high expectations — the producers, HBO. How can we make this fresh and live up to what we've done before? What does it all mean? All that was swirling around my head." However, after the world went into quarantine and production temporarily shut down due to COVID-19, Daman began to see things from a new perspective.

"When I came back into it in August, I kind of released myself of all that weight I was putting on myself," he says. "I was like, I just want to go into it with an open mind, it's a new generation, and go into it as if I'm designing a new show. I know by heart everything we've done and how we can seamlessly hide these Easter eggs into it, and make it fan-worthy and live up to what we did originally. But I also have to release myself and be like, 'This is a new generation. It's a new world,' and look at it like that, not keep thinking about, 'What if? What if? How can I?' Just do it. It opened my creative flow in a wonderful way, and it seems like it's working because the reactions are very positive."

That statement is beyond true. Even before we knew plot points or saw a single trailer, paparazzi captured the show's fun fashion choices, from knee-high boots to baggy pairs of overalls, which helped generate a ton buzz. Daman tells InStyle that while Gossip Girl 1.0 was "much more analog," this time around, social media played a major role when brainstorming how this unique group would dress. "It's such a part of the storyline and what's going on with this generation, but also stylistically, it's such a treasure trove of undiscovered influencers, passion, and style," he says. "It's a kaleidoscope of inspiration — mildly terrifying at times and can definitely be a bit of an Alice in Wonderland rabbit hole that's hard to pull out of. But a lot of my research and style work in the beginning was through Instagram, looking at influencers and what they're wearing. And following the bouncing ball from what was tagged to other stuff — that was very influential on how I went into the design process."

The end results were specific, signature style choices for each of the main Gossip Girl characters. Some enjoy breaking fashion rules, others work activism into their outfits, but all of what you see on screen tells a part of that person's story. "What I love so much about costume design is that it does help shape who these characters are and it can shape the tone of a scene as well," Daman says. "It can help connect or disconnect from how we feel. It can reject or it can repel or attract you, your curiosity. I always say that clothing is a form of communication."

Ahead, Daman breaks down what to expect from three of the new icons you'll catch on the sequel, along with how these teens approach designer clothing, school outfits, and party looks. "She's tagged as 'influence.' So, it was important to look at influencers and what that means, how they dress and portray themselves. It's always on public display and everything's very sought out, in a way. I would say that Blair was very meticulous and thought out in the way she presented herself, but this is a very new iteration of that. There's a casual ease to it, which feels like what we do on Instagram — we want it to feel authentic, even though it's through filters and all of that. So, playing with that, and especially with her school uniforms. She's breaking all of the rules by wearing biker shorts and oversized shirts, it's like she doesn't have any bottoms on at all. They're a big rule-breaker and I think as the queen of the school, she can do that and make a statement about who she is stylistically and her place in the food chain there."

"Also, her dad in the show is a music producer. So, I also looked towards like, when he would have been coming up — the early aughts, Destiny's Child, or TLC, or Aaliyah. Like, the VMAs of that era and how that style, which is also very on trend right now with this generation. I'd look at that and kind of figure out what the bridge into the contemporary version of that is, which led me to LaQuan Smith. When I first started, the collection had just come out with when I first started was very Destiny's Child, Music Video Awards 2001. It was perfect." "She's in from Buffalo and is a little bit of an outsider, and isn't necessarily as moneyed as our girls. She has aspirations that are socio-political and is an activist. We integrate that and what that means to how she dresses with vintage and incorporating Black-owned businesses with school totes that she uses or sweatshirts. Her graphic tees are about current issues, as opposed to a graphic band tee from Urban Outfitters. Not that those aren't wonderful T-shirts, but what we've been able to do with her character, and to use this voice that we've been given, is really awesome and feels really right for the time. It's a wonderful kind of balance. A lot of people think fashion could be frivolous, but it can also be an incredible powerful platform." "He's kind of this pansexual supergod and is gorgeous — it looks like he just walked off an Italian catwalk with chiseled cheekbones. He has such confidence and he can sleep with anybody he wants, and has a real regal air about him. The way he dresses has also like a fluidity to it; we've just chosen fabrics and silhouettes that have a drape. Also, the fact that we've been able to break down gender norms in a way. He can wear a Paco Rabanne lace women's blouse, put it on and look sexy AF and be the most sensual man in the room in this woman's shirt. Whereas in the original, that was not part of the conversation. I think it's wonderful to be able to kind of break down these barriers that society has kind of set for us, and it also feels so right for the Gen Z viewers. I think that they have a very different outlook on gender norms and to be able to be part of that conversation and to contribute it, and hopefully even push it forward, has been a wonderful gift." "Everyone seems to be really keyed into this school uniform trend. The uniforms are such a big part of Gossip Girl, part of the iconic look. With the original, I colored within the lines of what a school uniform is, but with this continuation, the school uniform is much more like Pandora's box exploding. We don't abide by the rules. We can wear heels to school and I don't have to wear pants, I'm just going to wear this oversized shirt. Now, I can layer. I'm going to take my dad's Saint Laurent varsity jacket and throw a Constance Billard crest on it and keep on trucking. They're not shopping at the Constance Billard bookstore." "Just dial it up. To me, dressing up is a really big step forward out of the pandemic, so it was fun to be able to play with what those looks were going to be — glamorous, tiny little dresses, beautiful silk shirts. Being able to show ourselves off and socialize. Like, Julien shows a lot of skin. I live in East Village and I've seen it so much on the streets here on the weekend. People are out and they're wearing tiny, tiny dresses and there's sparkle. But also there's a minimalism to it. The colors are all kind of monochromatic, like beige, cream, and neutrals." "Another great part of what we get to do on Gossip Girl is kind of work with these, I don't want to say up-and-comers, but these designers that are not as well-known as, let's say, the Saint Laurents, Louis Vuittons, or Celines, and give them voice and give them platform. As you know, we did that in the original, working with these designers that are in New York. Julien also has a really wonderful moment with Christopher John Rogers, which you might've seen in the trailer — it looks like there's a CJR fashion show that Julien is in. That just felt very, very right for the voice that we're trying to give and the tone that we're trying to set for the show, as far as like inclusivity and using Gossip Girl as a socio-political platform as well as a high fashion guide. It was wonderful to kind of tiptoe in between those two worlds."