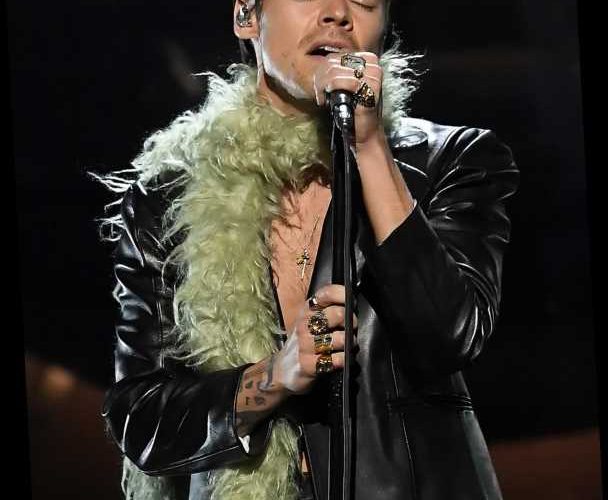 No, Harry Styles, you're so golden.

The 27-year-old singer and fashion risk-taker — who's nominated for best pop solo performance, best pop vocal album and best music video — took the stage at the 2021 Grammys on Sunday night to perform "Watermelon Sugar" in a black leather suit and green feather boa, all custom Gucci.

Styles went shirtless under his tuxedo jacket, staying true to his gender fluid, retro-inspired aesthetic. He paired the look with heeled loafers, several chunky rings and a cross necklace. The star, who was named a face of Gucci in 2019, has modeled for Gucci menswear and worn a Gucci gown as the first solo male to grace the cover of Vogue. His Grammys look is just the latest in one of his major partnerships with the brand (who could forget his Met Gala look?).

Last year, the star sparked conversation about gender roles in fashion when he donned a lace-trimmed Gucci dress and tuxedo jacket on the December cover of Vogue.

The headline "Harry Styles Makes His Own Rules" accompanied an idyllic photo of the "Adore You" artist blowing up a balloon. And the same message was conveyed inside the issue, where the singer opened up about challenging traditional norms and expressing himself through his style.

"Clothes are there to have fun with and experiment with and play with. What's really exciting is that all of these lines are just kind of crumbling away," Styles told the outlet. "When you take away 'There's clothes for men and there's clothes for women,' once you remove any barriers, obviously you open up the arena in which you can play."

He continued: "I'll go in shops sometimes, and I just find myself looking at the women's clothes thinking they're amazing. It's like anything—anytime you're putting barriers up in your own life, you're just limiting yourself. There's so much joy to be had in playing with clothes. I've never really thought too much about what it means—it just becomes this extended part of creating something."

On Sunday, Styles joined performers Taylor Swift, Dua Lipa and Roddy Rich who also took the stage (virtual and otherwise) for the 63rd annual awards show. The trio has six nominations each and tied for the second most nods, behind Beyoncé who earned a total of nine.

Billie Eilish, Megan Thee Stallion and DaBaby, who each garnered four nods this year, will also be performing, along with Bad Bunny, Black Pumas, BTS, Cardi B, Brandi Carlile, Doja Cat and others.

Like many socially-distanced awards shows that have already taken place, this year's Grammy nominees will be coming together while staying safely apart to celebrate music's biggest night amid the ongoing coronavirus (COVID-19) pandemic.

Throughout the 2021 show, several music venues across the country, which have been greatly impacted by the pandemic, will be honored, as bartenders, box office managers and other day-to-day employees will serve as presenters for various awards categories.