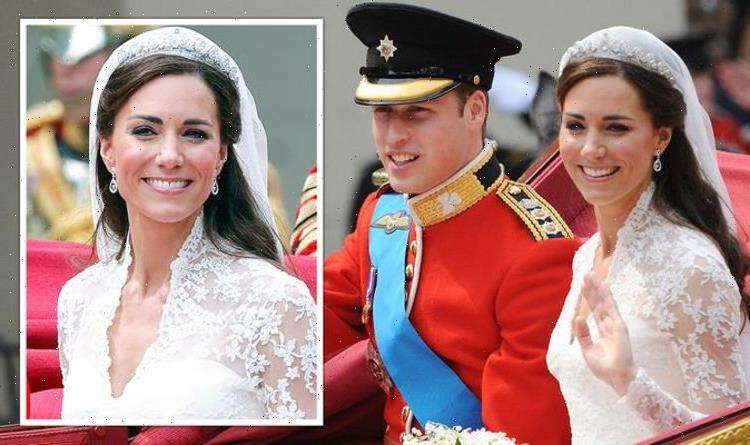 Kate, Duchess of Cambridge has worn tiaras from the Queen’s royal collection on several occasions during her decade as a senior royal. But for her first-ever royal tiara, Kate decided to make a bold decision that no other royal bride had made before.

For royal weddings, the Queen traditionally lends the bride a tiara from her dazzling and extensive collection, which has built up over the centuries.

Popular tiaras at royal weddings over the last 100 years have included the Queen Mary’s Fringe Tiara, which was worn by the Queen, Princess Anne and Princess Beatrice on their respective big days.

But Kate decided to make royal history at her own wedding to Prince William, by wearing a tiara no other royal bride had worn before – the Cartier Halo Tiara.

And for added uniqueness, Kate’s tiara was also one the Queen herself had never worn publicly before.

The Cartier Halo Tiara had not had a public outing for some time before Kate’s wedding, although it had previously graced the head of the Queen’s sister, Princess Margaret.

The tiara last made an appearance in the 1970s when it was worn by the Queen’s daughter, Princess Anne.

The Cartier Halo Tiara consists of impressive and delicate scrollwork, along with a plethora of diamonds.

But the tiara’s history is equally as beautiful as its intricate design.

The Cartier Halo Tiara had been in the Royal Family’s possession for some time.

The headwear was commissioned by King George VI, the Queen’s father, for his wife Queen Elizabeth, later the Queen Mother.

Although the Queen Mother wore the design on occasion, it would later be gifted to her eldest daughter and future Queen, Princess Elizabeth.

As the Queen’s 18th birthday fell in 1944, during peak wartime, Princess Elizabeth is thought to have not worn the tiara publicly due to perceptions it might be extravagant.

And by the time Elizabeth became Queen years later, she still had not worn the tiara publicly.

Throughout the Queen’s almost 70-year reign, the Queen to this day has not worn the tiara in public, favouring other designs.

But as Tatler reports, Kate’s decision to wear her tiara at the beginning of her royal journey echoes the fact the tiara was gifted to Princess Elizabeth at the start of hers, long before she became the Queen we know today.

The Queen is often spotted wearing the Girls of Great Britain and Ireland Tiara, which was a present to her grandmother, Queen Mary.

Since her royal wedding day in 2011, the Duchess of Cambridge has not worn the Cartier Halo Tiara in public.

Instead, Kate has worn the Cambridge Lover’s Knot Tiara on several occasions, which has incredible sentimental value for the royals.

Many royals have worn the tiara, and it was known to be a favourite of Kate’s late mother-in-law, Princess Diana.