FLIES gather around tea bags, open cat food pouches are scattered everywhere and a stack of dirty paper plates are piled up covered in maggots…

But this isn’t a rubbish dump – it’s 47-year-old hoarder Sally-Ann’s litter-infested kitchen, which she can no longer use because it's jam-packed with stuff she's been hoarding for the last 17 years – and now she's forced to prepare sandwiches in her bed. 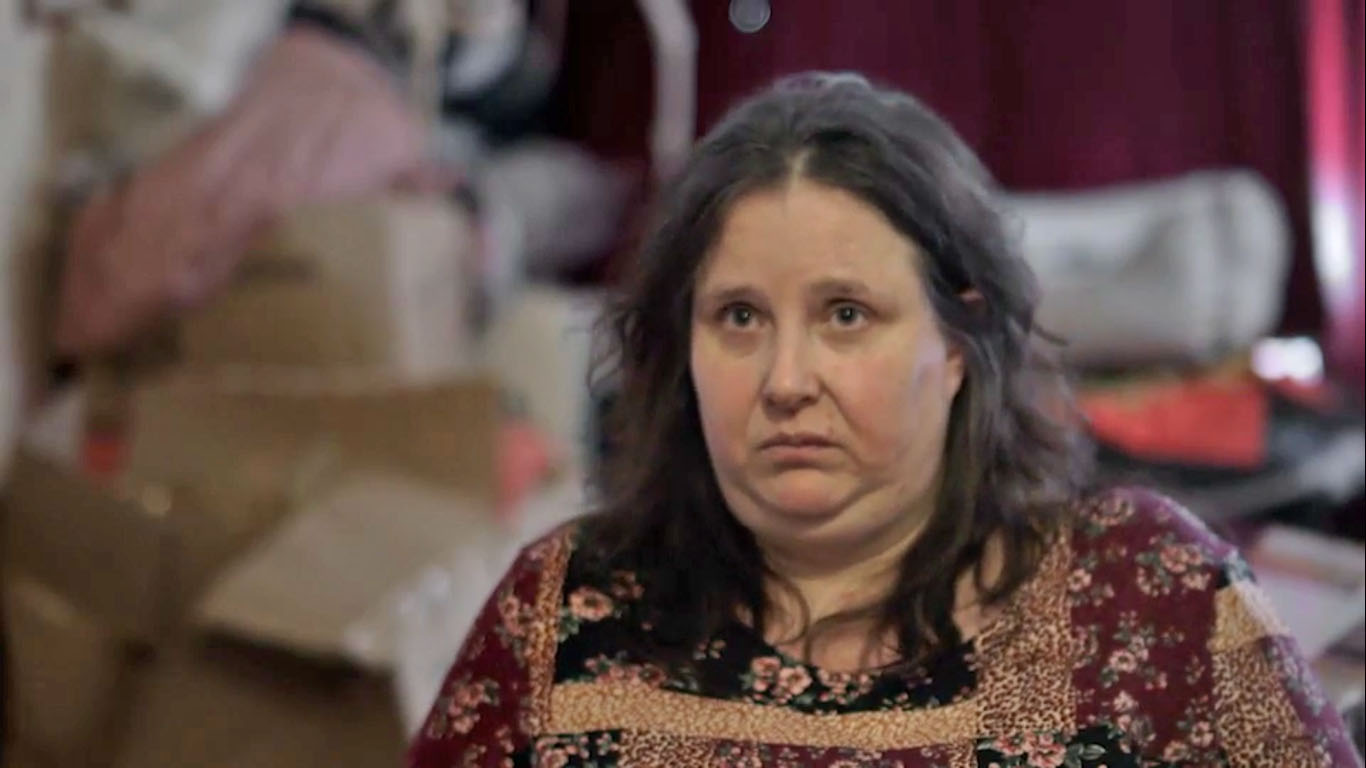 The 47-year-old is a self-confessed ‘rubbish hoarder’, and at one point the problem was so bad Sally-Ann’s bedroom was plagued with carpet bugs and her bathroom was unusable – which meant she had to resort to desperate measures.

She says: “I couldn’t get to the toilet in time because I’d have to climb over all the rubbish so I started urinating in bottles. "The cats were sleeping around me as well and they’d end up messing in certain corners of the bedroom.

“I created a hell basically to live in.”

It’s thought one in 20 Brits could harbour a serious hoarding problem, and there are thought to be 1.2 million hoarders in the UK. 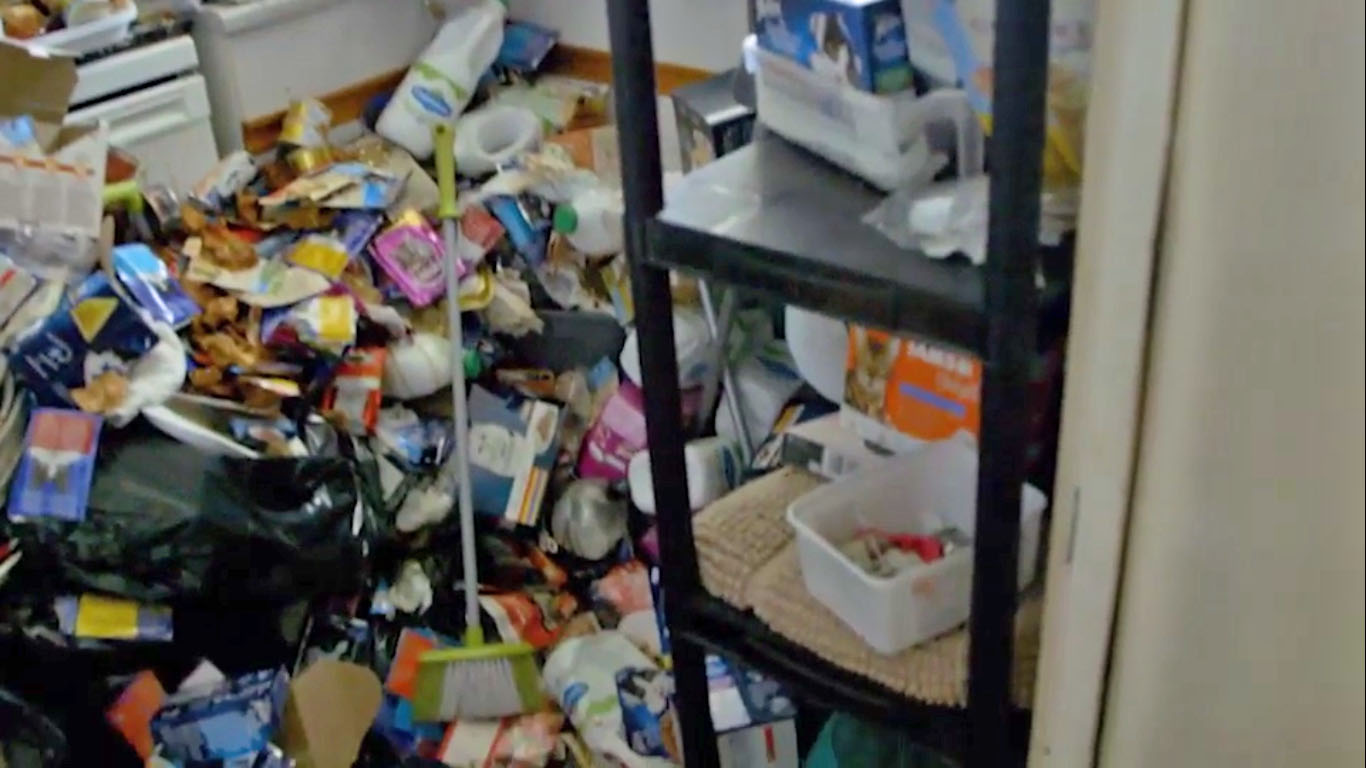 Telling her story for Channel 5 show Hoarders: Buried Alive In My Bedroom, Sally-Ann explains how her living situation spiralled out of control…

‘I can’t be bothered to throw rubbish away’

Sally-Ann says her problem was began when she moved into her own place.

She’s lived in the two-bed flat in an 18-storey council block that she shares with her cat Custard for 17 years and hoarding became a real problem for her after the death of her mother.

Sally-Ann, who is unable to work due to health issues – says: “I don’t think it’s that I can’t throw stuff away – I can’t be bothered to. 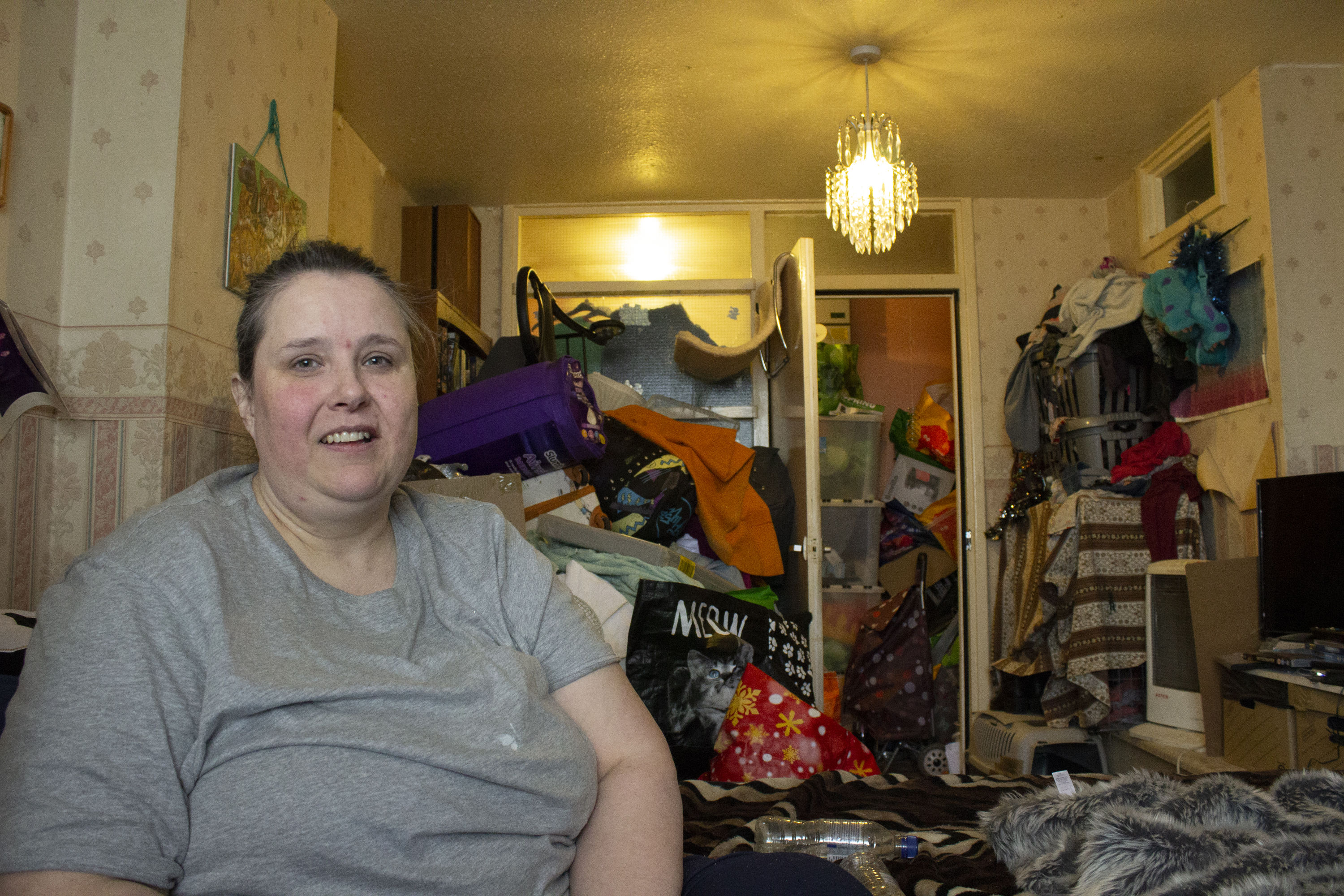 She says: “I think it began when I moved in on my own. My place used to get untidy anyway, like everyone’s does and then all of a sudden I had to put the bin out and I just thought ‘oh my god’.

“I class myself as a hoarder in the sense of a rubbish hoarder.”

'I was living with cat faeces everywhere'

At one point the problem was so bad, Sally-Ann’s health was in danger.

She says: “I was living in pure rubbish, and I mean pure rubbish. You couldn’t see my bed, and from the floor to the ceiling there were piles and piles of black bags dissolving with cat food, rotting food and cat litter – cat faeces and all sorts and I was actually living in that. 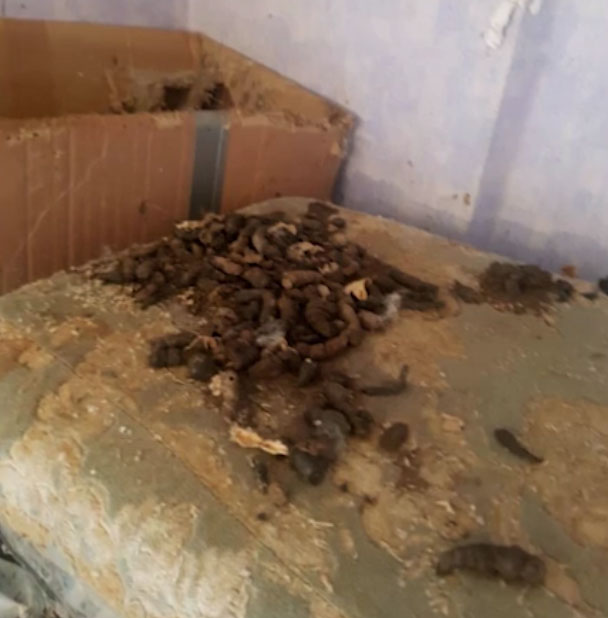 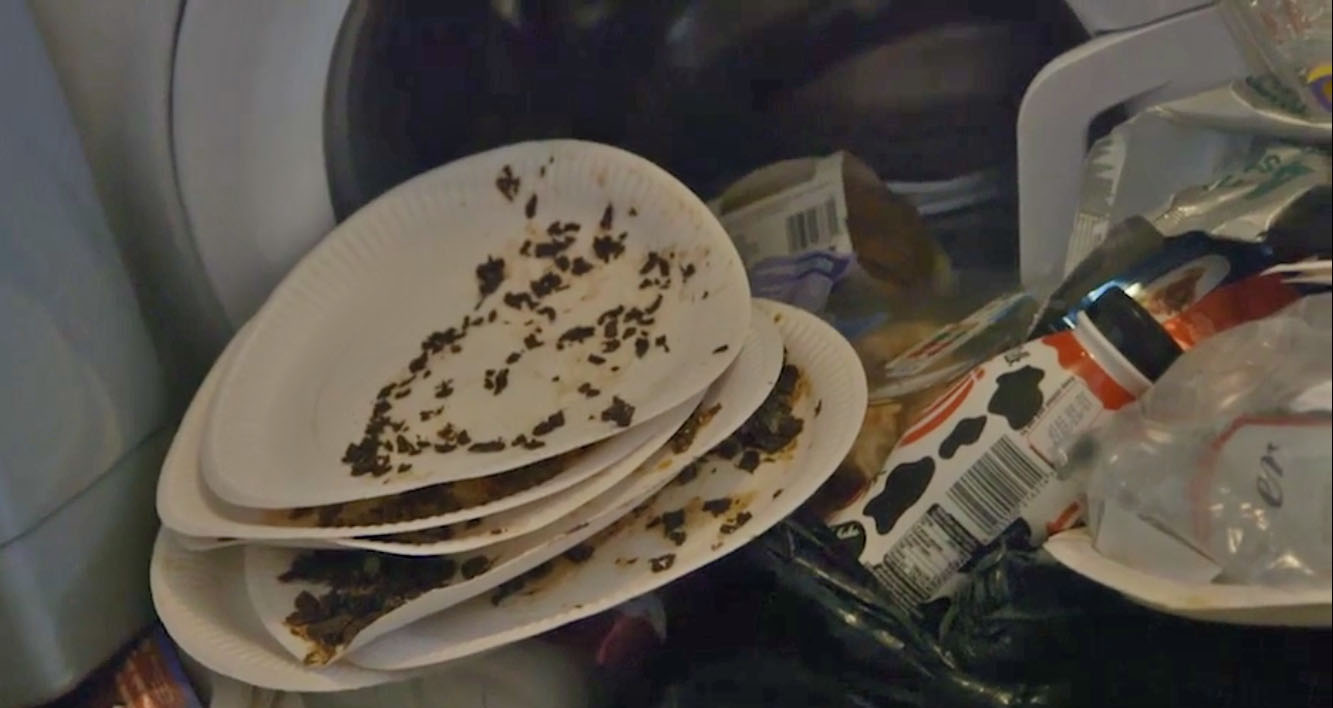 “On top of that I had carpet bugs so they were crawling all over me in my bed.”

Her neighbours complained, and Sally-Ann was threatened with eviction by the council.

It took a team six days to clear the flat and Sally-Ann was given specialist counselling and for 18 months was checked up on regularly.

However, now the problem has spiralled out of control again, and she’s forced to call in cleaning team Kaz and Tee to help her – who look on in disbelief at the state of the kitchen and bedroom.

“Sally, are you s***ing me?” One of them gasps as she sees the rubbish covering the kitchen floor, and maggots wriggling around the paper plates. 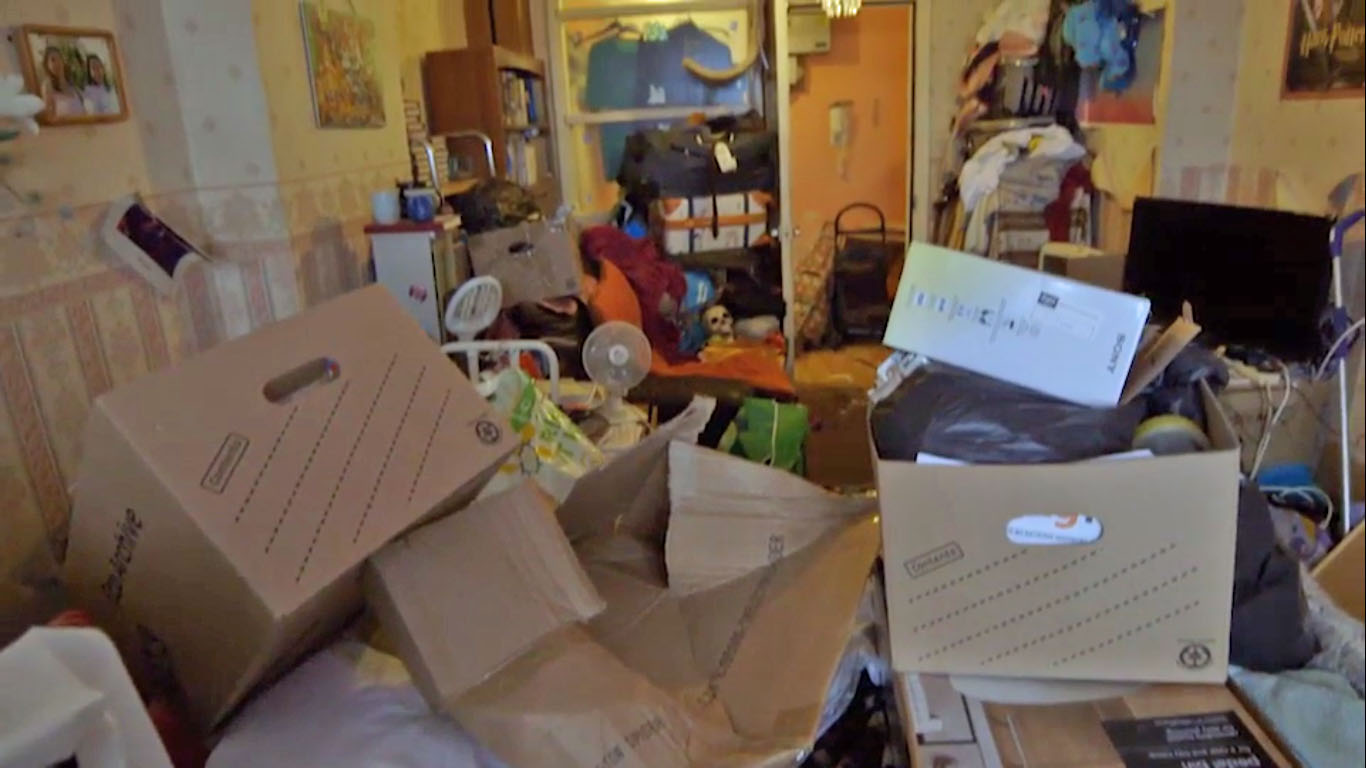 “I think I can smell urine,” one of the cleaners says as they clean out the bedroom.

Sally says: “It all crept up on me again last year.

“Once you’re a hoarder your always a hoarder. It’s like once you’re an alcoholic, or a drug addict.”

It takes four days to clear out a tonne of the hoard and Sally’s flat is finally habitable again. 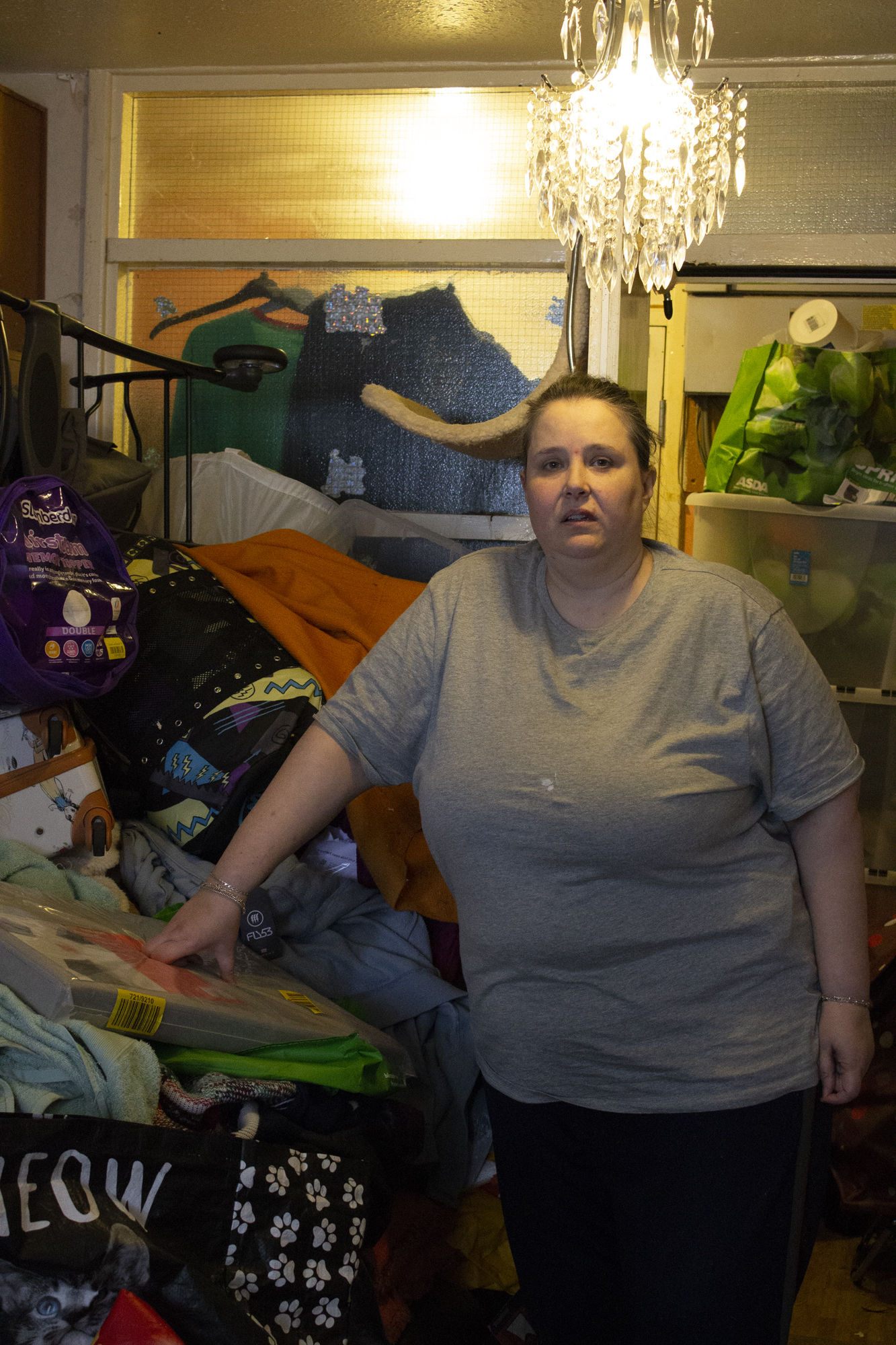 Sally-Ann isn’t the only one telling her story on the Channel 5 show.

In London, 40-year-old Faye, who suffers from OCD, has also opened her doors to reveal the extent of her hoarding habit. She hasn’t slept in her own bed for three years, sleeping on the sofa.

She says: “I worry anyone who comes in is going to judge me, and have misconceptions I’m dirty.

“OCD and hoarding is very much a secret illness.”

She’s so embarrassed by the state of her flat that instead of getting her broken boiler fixed she’s been having stone-cold showers for five years. 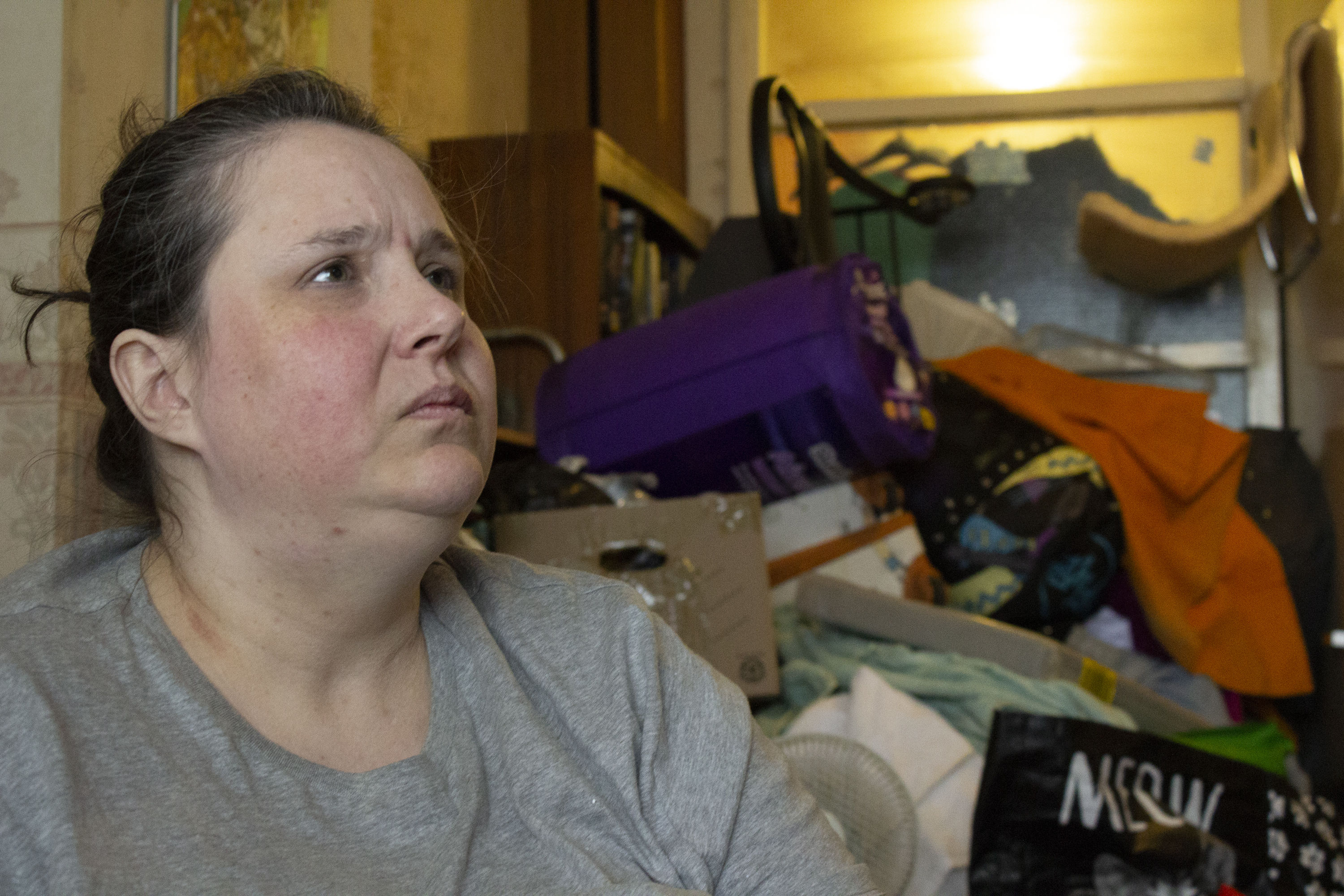 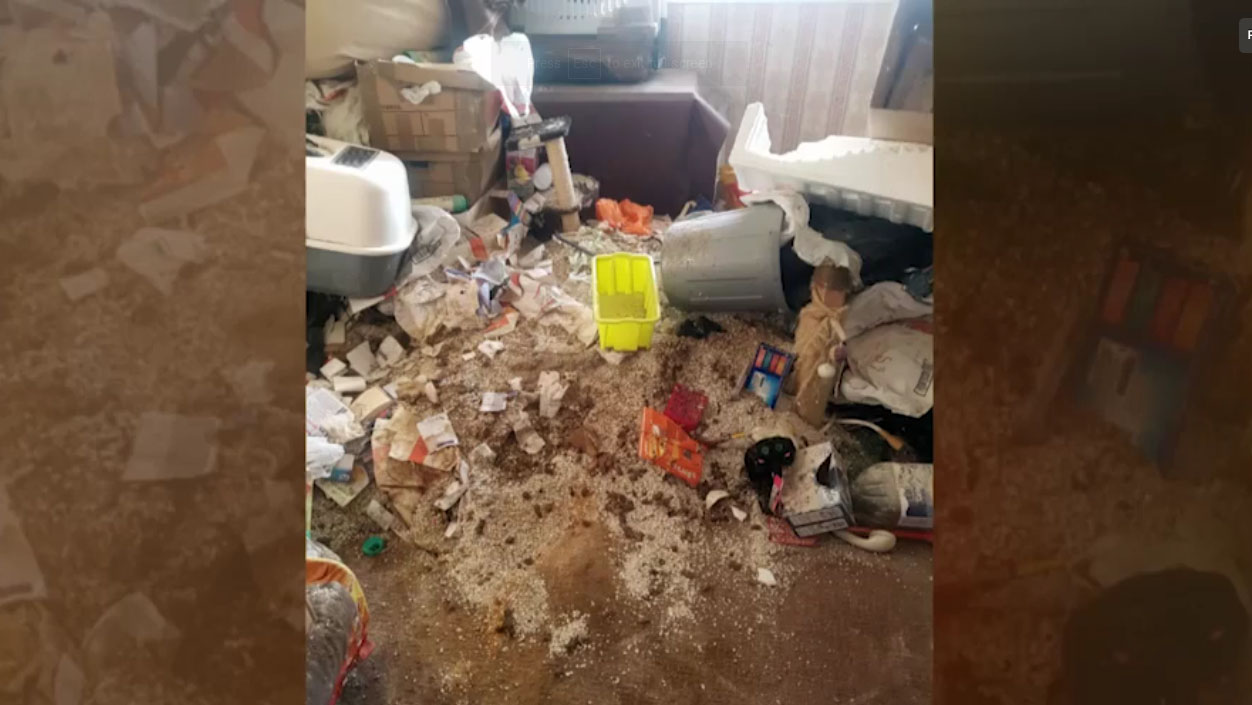 69-year-old Richard, known as Britain’s most extreme hoarder, from Surrey has been hoarding magazines and newspapers -including the Sun- for over four decades, going back to 1976, as well as the stickers from fruit, and plastic packaging, and has 17 old broken-down vintage cars.

He’s lived in the family home since birth, and successfully fought through the courts to keep his hoard.

Hoarders: Buried Alive in My Bedroom, Channel 5, Tuesday at 10pm