THOUGHT glitter boobs were this summer’s most daring trend? Well, models have been taking to the beach, pool parties and Coachella wearing nothing but strategically-placed metallic duct tape over their nipples and privates.

The fearless look is the latest brainchild of Joel Alvarez, a designer from Miami, who owns an “artistic” venture called the Black Tape Project. 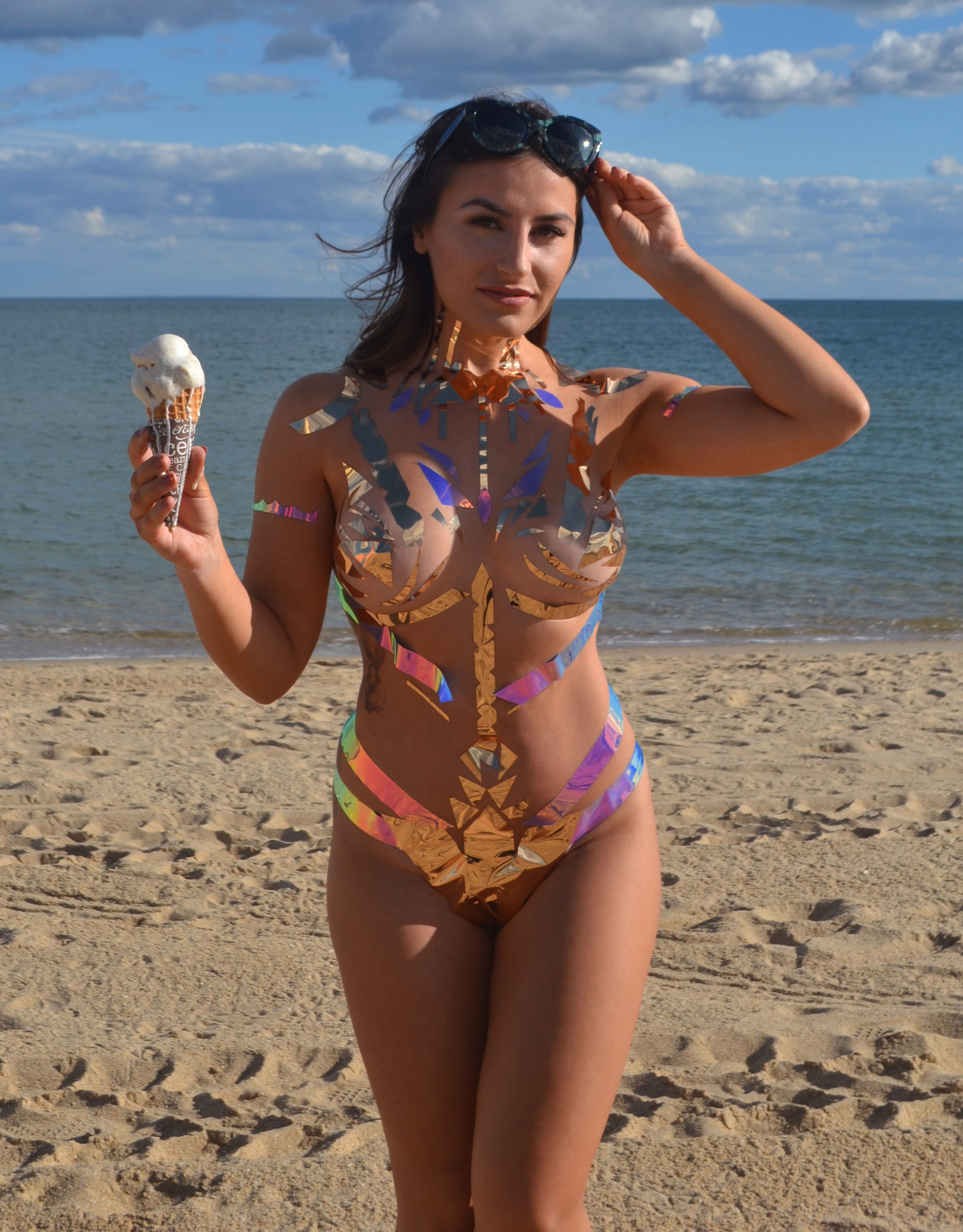 His striking black designs were the talk of Instagram last autumn and have just been given a glitzy makeover for 2019.

But can a normal girl really pull off the look? Brave Fabulous Digital reporter Deni Kirkova, 28, from London, taped up for a day out at St Kilda beach in Melbourne, Australia.

Deni admitted: “I tried the black tape look when it went viral online two years ago but the metallic version is very different.

“It’s a lot brighter, more glamorous and eye-catching. I love the look when it’s freshly applied; I felt like a real-life mermaid, but the material felt a little flimsy in large strips.” 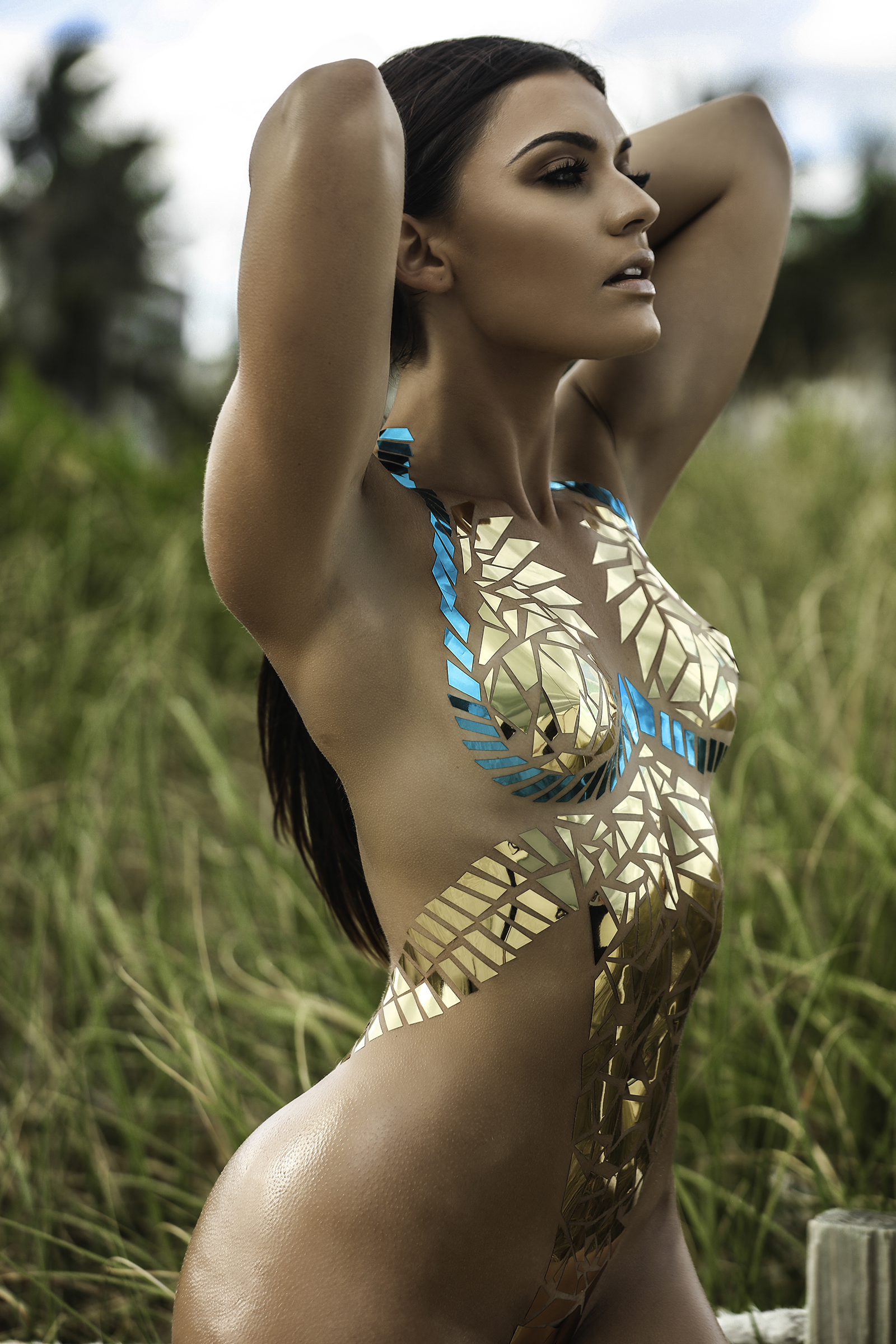 Deni said: “I thought it would be quick to apply like the black tape, but the metallic took twice as long because you need to cut a lot of it up into small pieces.

“It was an entertaining couple of hours in the ladies loos of a beach-side café. Women kept walking in and gasping, while others didn't know where to look.”

A gust of wind whipped off some bits of tape

After taking a few deep breaths, Deni strutted onto the beach. Shocked holidaymakers who were catching some rays gawped as she made her way across the sand.

Two Chinese ladies burst into giggles, yelling the tape outfit looked “sexy” and “fantastic”. While, Emma, 26, said the bold outfit would look great at a festival. 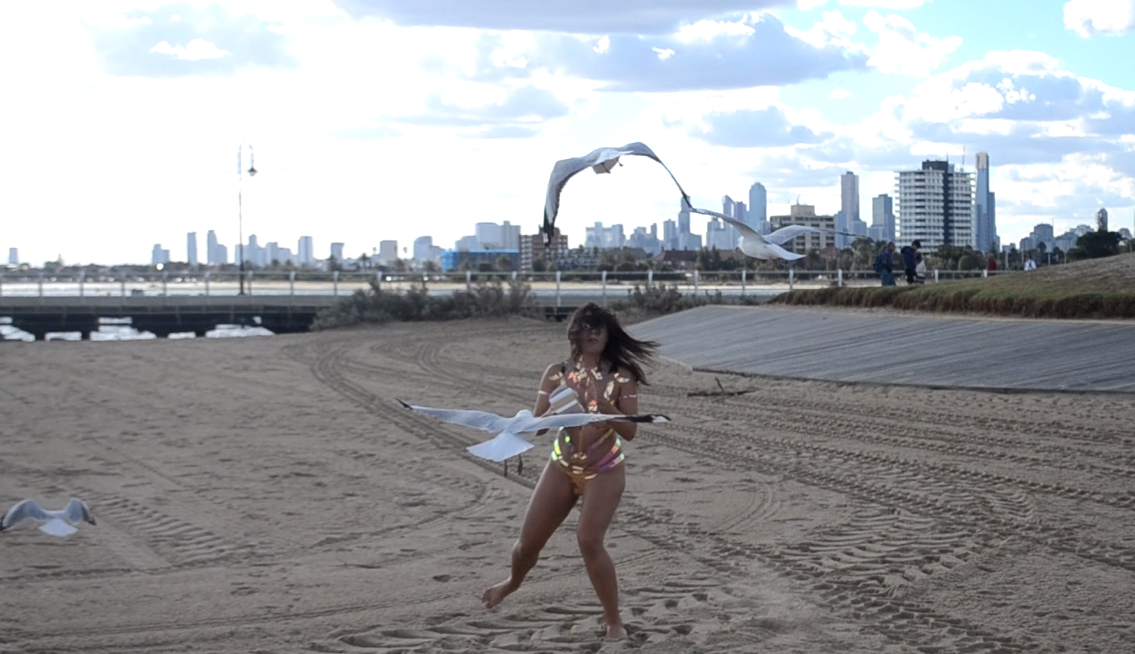 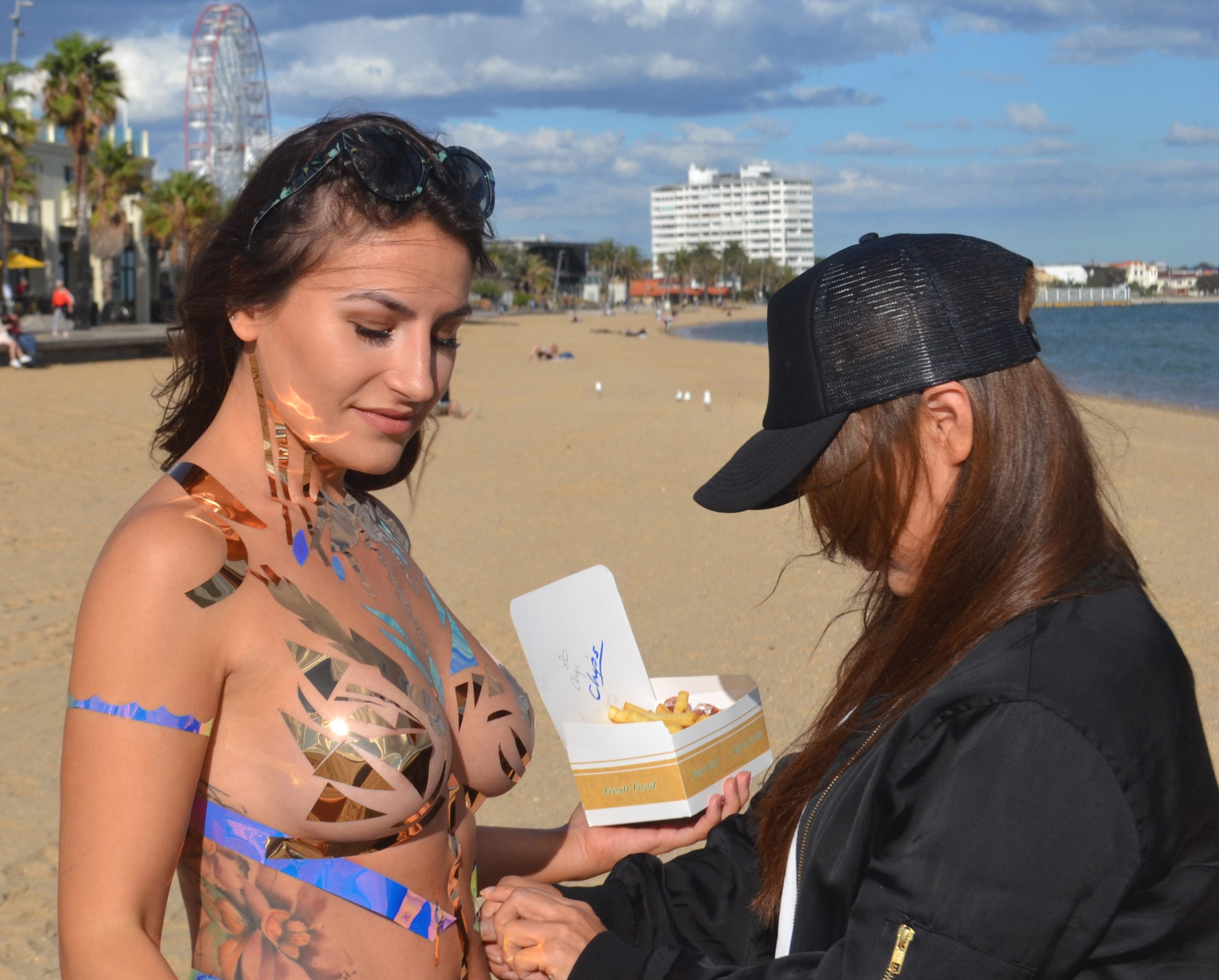 Admirer Jacapo, 23, wolf-whistled and said he could see girls rocking it at a party.

And, a group of older ladies looked on in admiration as Deni walked past, saying: “It looks great on you, but I’m not sure everybody could pull it off”.

But, things quickly went downhill when the wind picked up speed.

Deni said: “It turns out that wearing this stuff while subjected to the forces of nature can spell disaster – you really need to know what you’re getting yourself into.

I had to run away from some birds and the tape just started to peel off. It’s no good in an emergency

“A gust of wind whipped off some bits of tape, while the movement of my neck and torso meant the tape started to flap about freely.

"Joyce had her work cut out for her to try and stick it back on.”

Deni struggled to keep her composure when she tried to participate in regular beach-side activities, like tucking into an ice cream and some hot chips.

Seagulls made a dive for her when they caught sight of her snack, and Deni struggled to keep it together.

She said: “Believe it or not, this outfit is not suitable for the beach. I had to run away from some birds and the tape just started to peel off.

"It’s no good in an emergency. 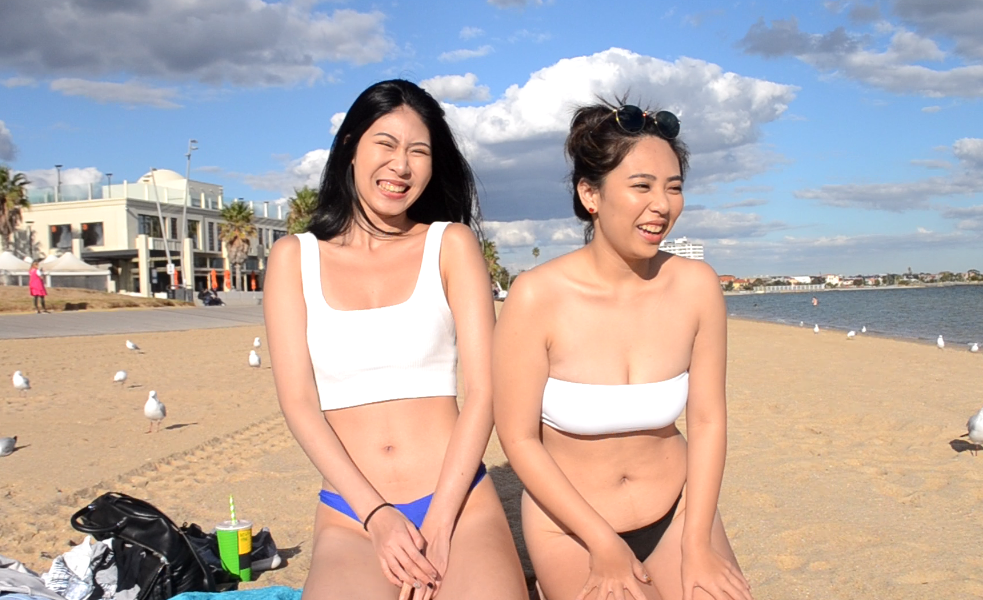 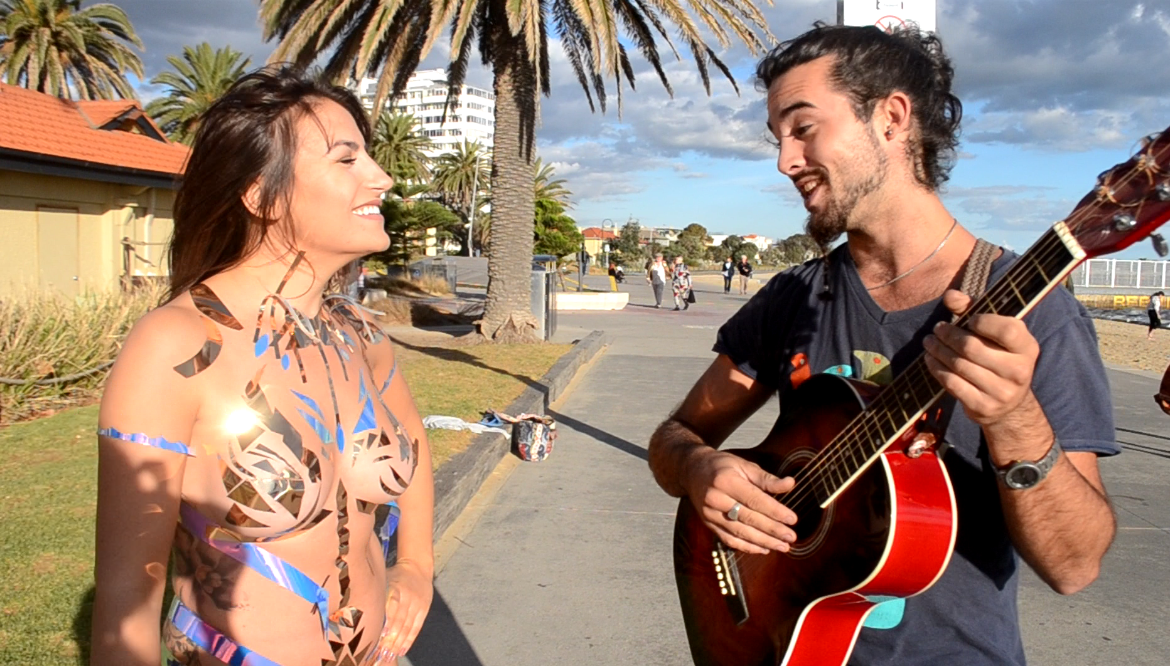 “You can’t swim or sweat without it falling off – and let’s not talk about the tan lines.

“I found it impractical as a top-to-toe look – I didn’t find it sticky enough and it doesn’t bend to the curves of the body like black electrical tape.”

They weren’t the only problems. Deni had to avoid the pina coladas for fear of needing the loo.

“Going the loo is basically a no-no,” she said. “You’d have to unstick the tape on your privates then try and reapply it.

“Despite this I did feel quite sexy in the metallic 'outfit'. The iridescent strips were so artfully applied they highlighted my shape in a flattering way.

“However, I’ve learned that it’s probably best applied in smaller bits rather than strips like the black stuff. 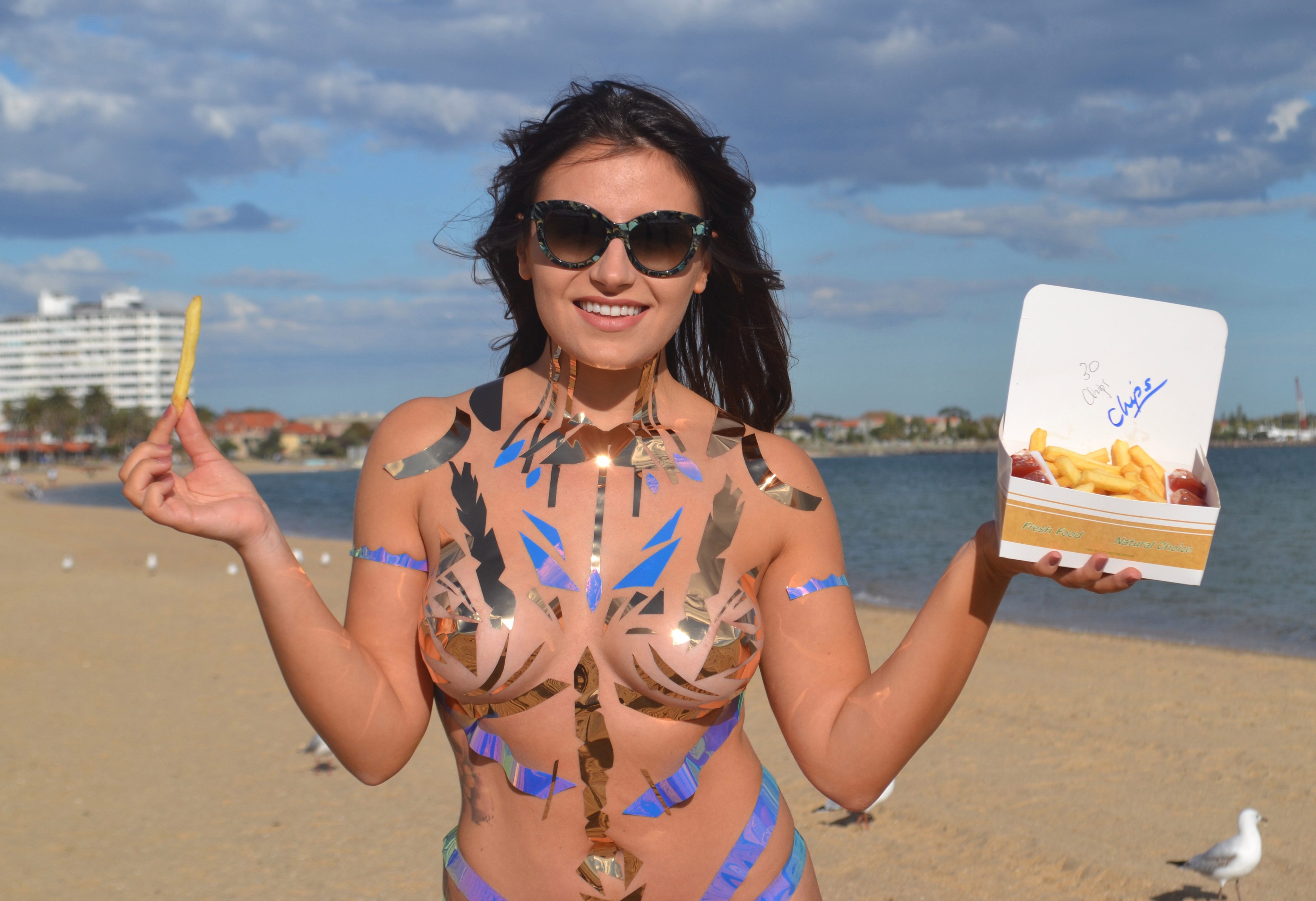 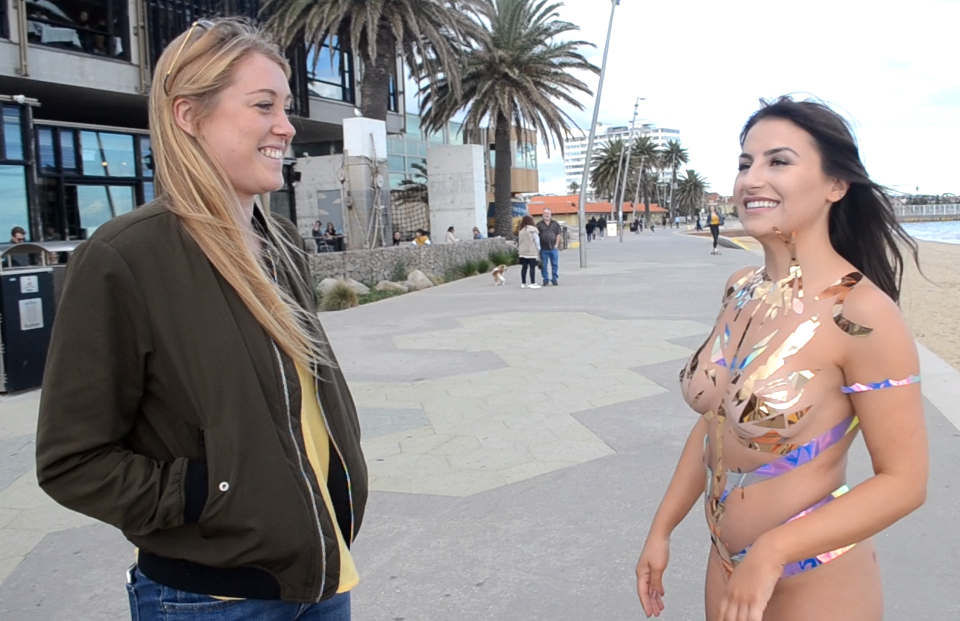 “For a photo shoot or special event, I think it’s fantastic! I’d even rock some tape on my top half at a festival with some glitter, gems and denim shorts on – and maybe a small bikini top.”

Student Tasha, 21, agreed it looked more hassle than it was worth. She said: “It’s very bold and you have to have a lot of skill to apply it… it would be fabulous at Parklife or Coachella festival but day-to-day, probably not.”

While guitarist Malo, 27, loved the glitzy tape look and joked: “I would wear it for sure”.

The trend has been made famous by the Black Tape Project, a US firm who “tape up” models to attend events in the provocative style.

STICKING OUT: HOW TO ROCK THE DUCT TAPE LOOK

“The look is surprisingly wearable – if you’ve got an amazing body and the guts.

“It’s all about angles and symmetry. You do have to take your time so the angles match.

“It’s about not overthinking it. Anything goes.

“I started on the boobs and then moved down to the bum area.

“To get it off you could just rip it or if that’s too painful I’d recommend sitting in a hot bath and letting it peel away.

“The tape costs £19-£38 and the brand ships internationally.

“I think it will be popular come festival season. You could use different coloured tape, glitter and body paint for a real eye-catching look.” 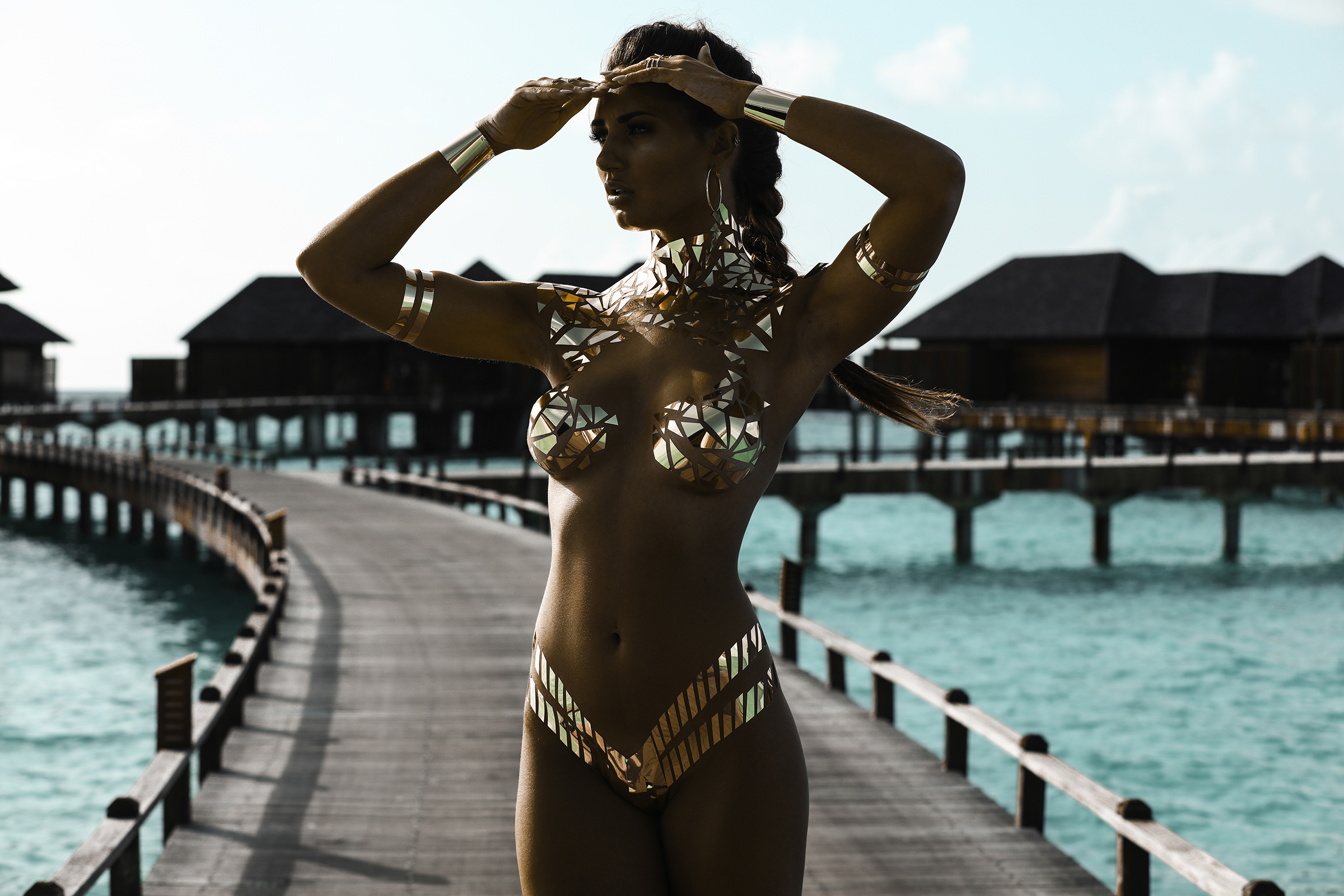 They claim their unusual fashion “outfits” combine one of the most common household items with the beauty of the human body.

And the tape art movement has certainly not gone unnoticed online.

The company’s Instagram page boasts over 86,000 followers who flock to see images of nude women partially covered in tape designs.

The company recently shared a video clip featuring a beautiful model taking a dip in the sea with nothing but the glittering gold design covering her modesty.

10/05/2019 Fashion Comments Off on I was wolf-whistled, nearly flashed my privates and couldn't go the loo when I wore a metallic duct tape 'bikini'
Lifestyle