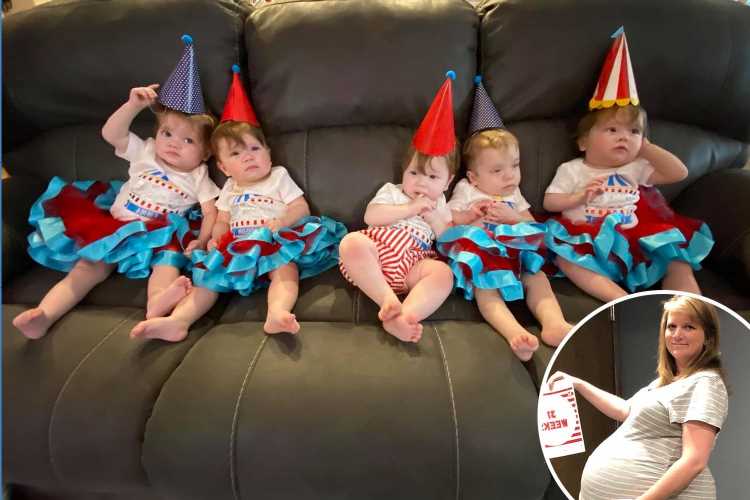 A MUM who decided to try for one more baby & became a parent to seven after welcoming quintuplets revealed how manic it is now they are one – and crawling.

Megan Hulen, from Minot, North Dakota, and her husband Joshua were already parents to Jacob, 8 and Matthew, 3, when they decided to try for one more baby in the hope of having a little girl. 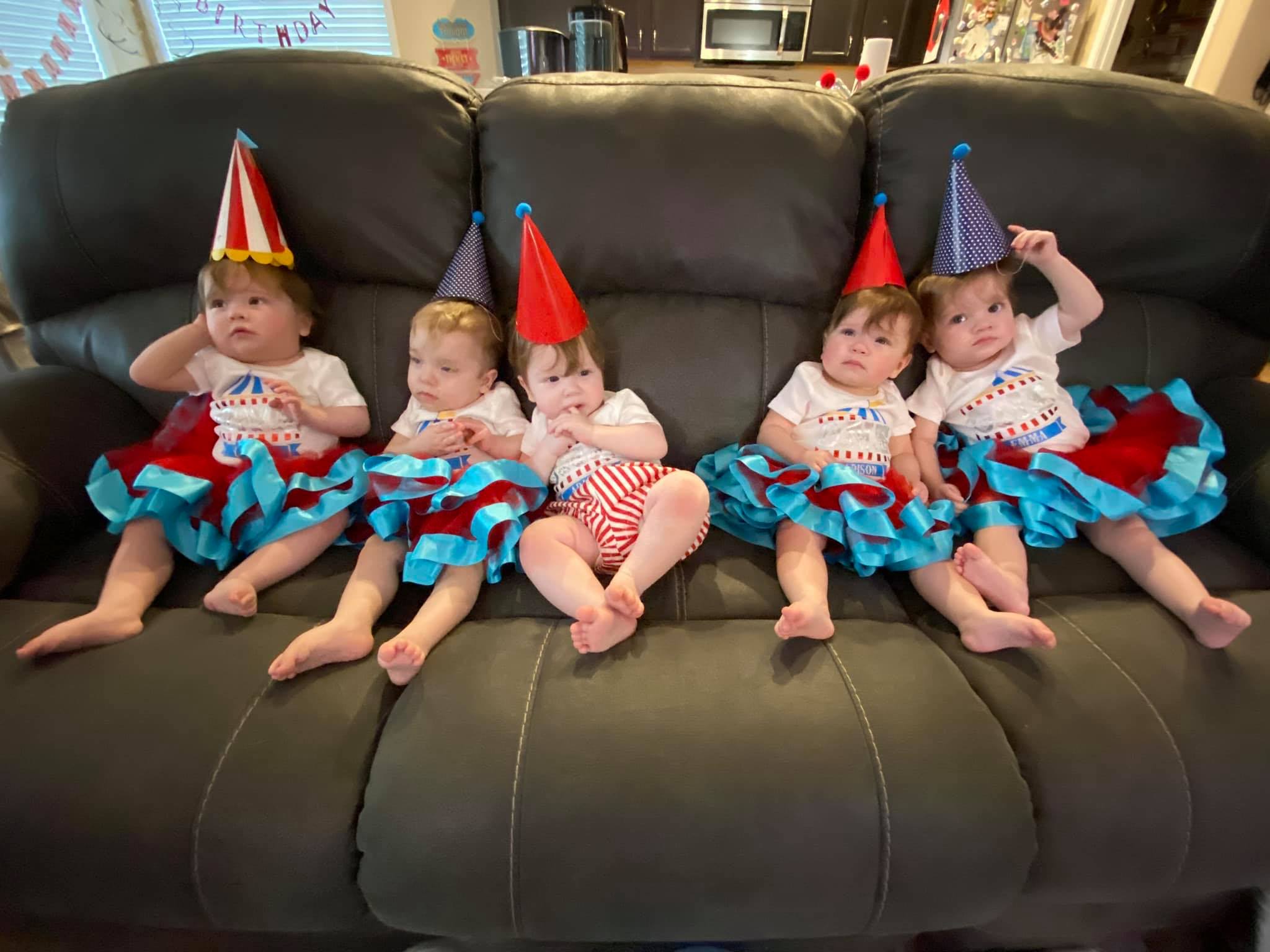 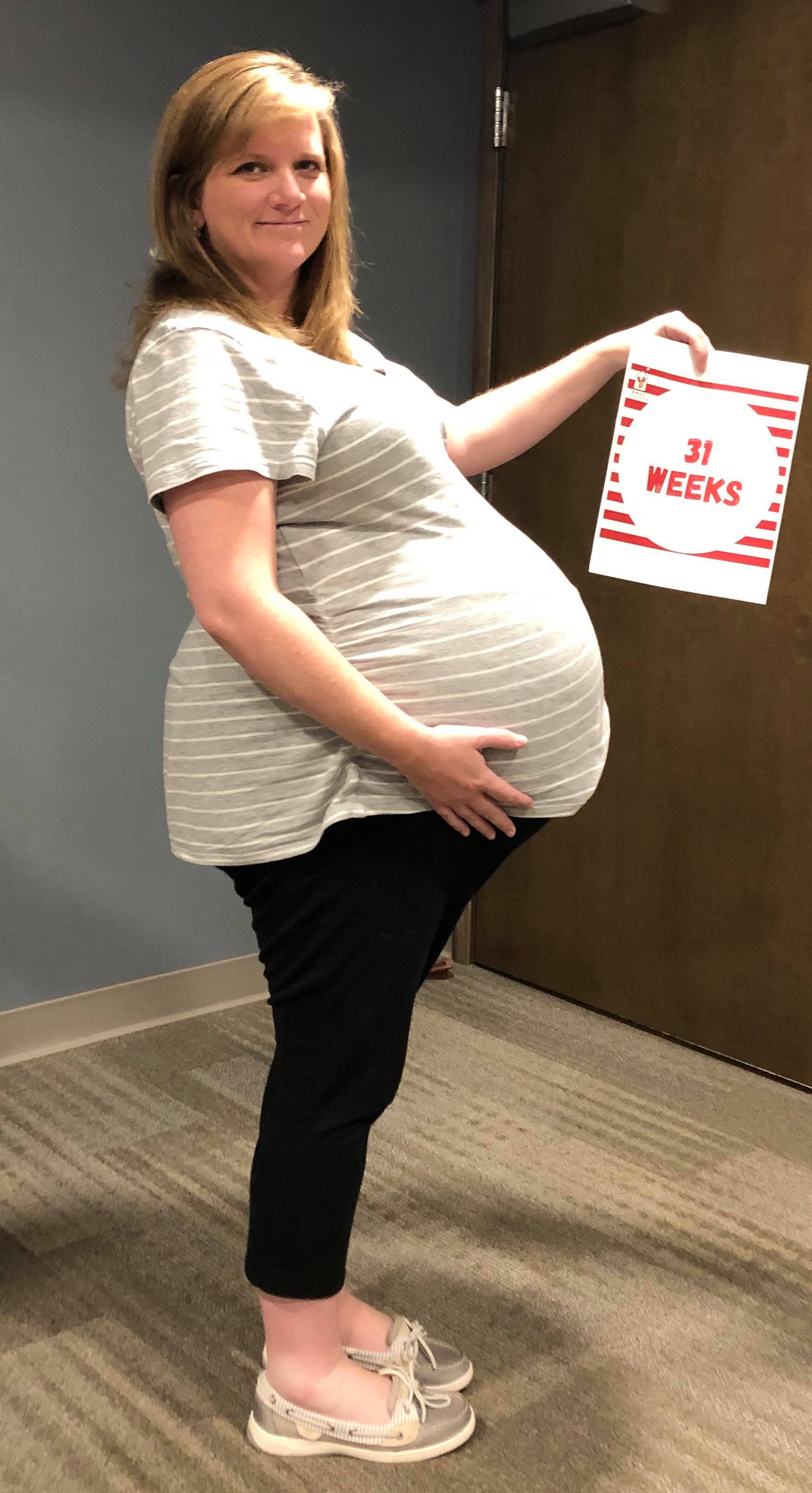 The mum, who has polycystic ovary syndrome meaning that she doesn’t naturally ovulate, had previously relied on fertility drugs and IUI when conceiving.

So couple were astounded to learn they had conceived the quints through natural ovulation.

Speaking to Fabulous she said: “It's been a learning experience.

"With every new milestone we have felt like we have had to relearn how to do things with them.

"But some great things they are doing now is holding their own bottles, crawling, furniture cruising and sleeping through the night.

"Our first year has been very chaotic but still full of love for every baby and of course our big boys too. They have been brilliant." 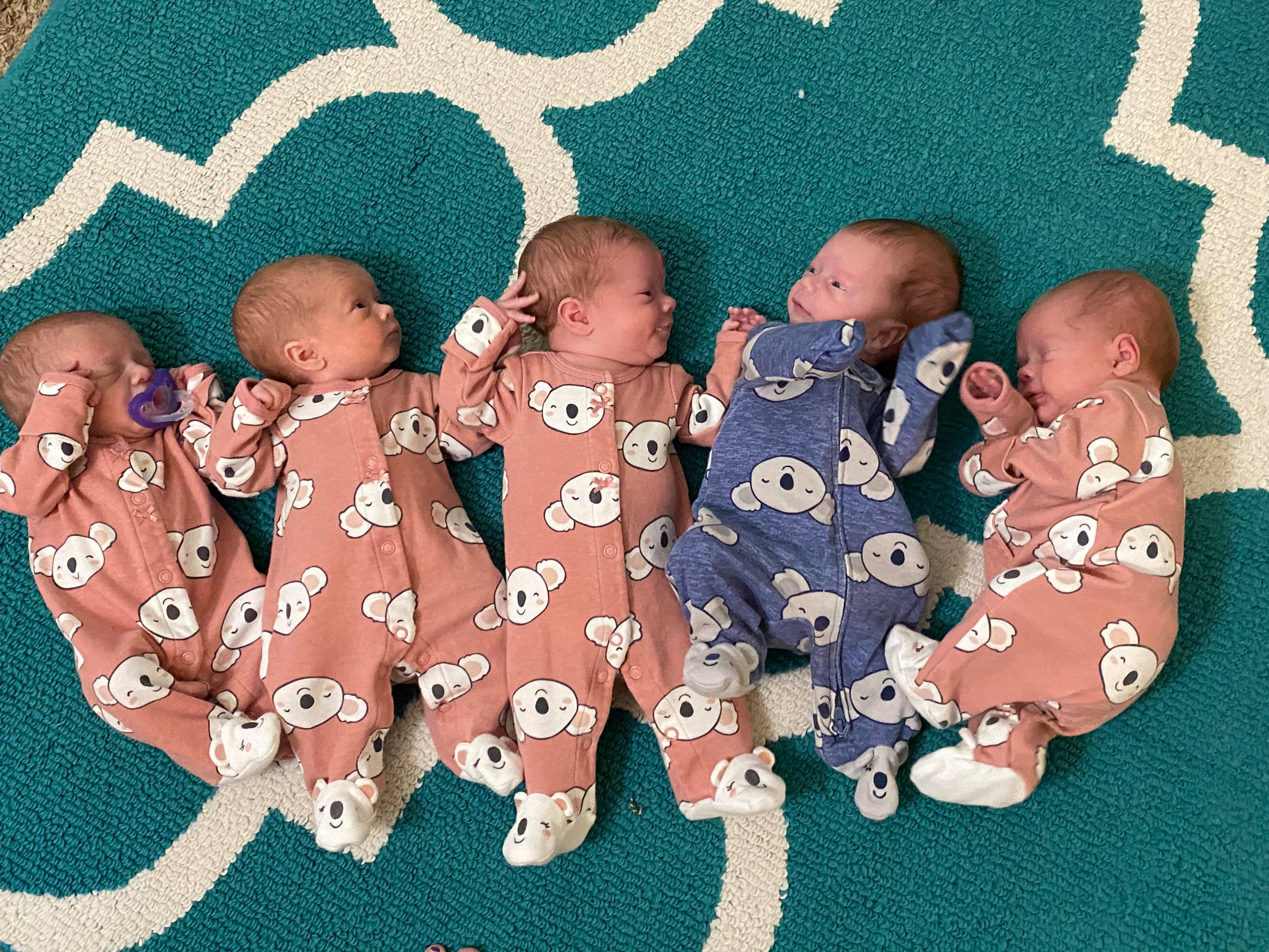 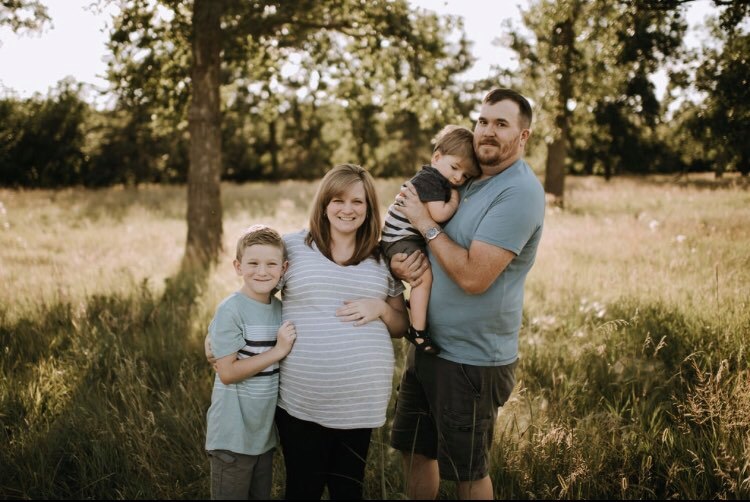 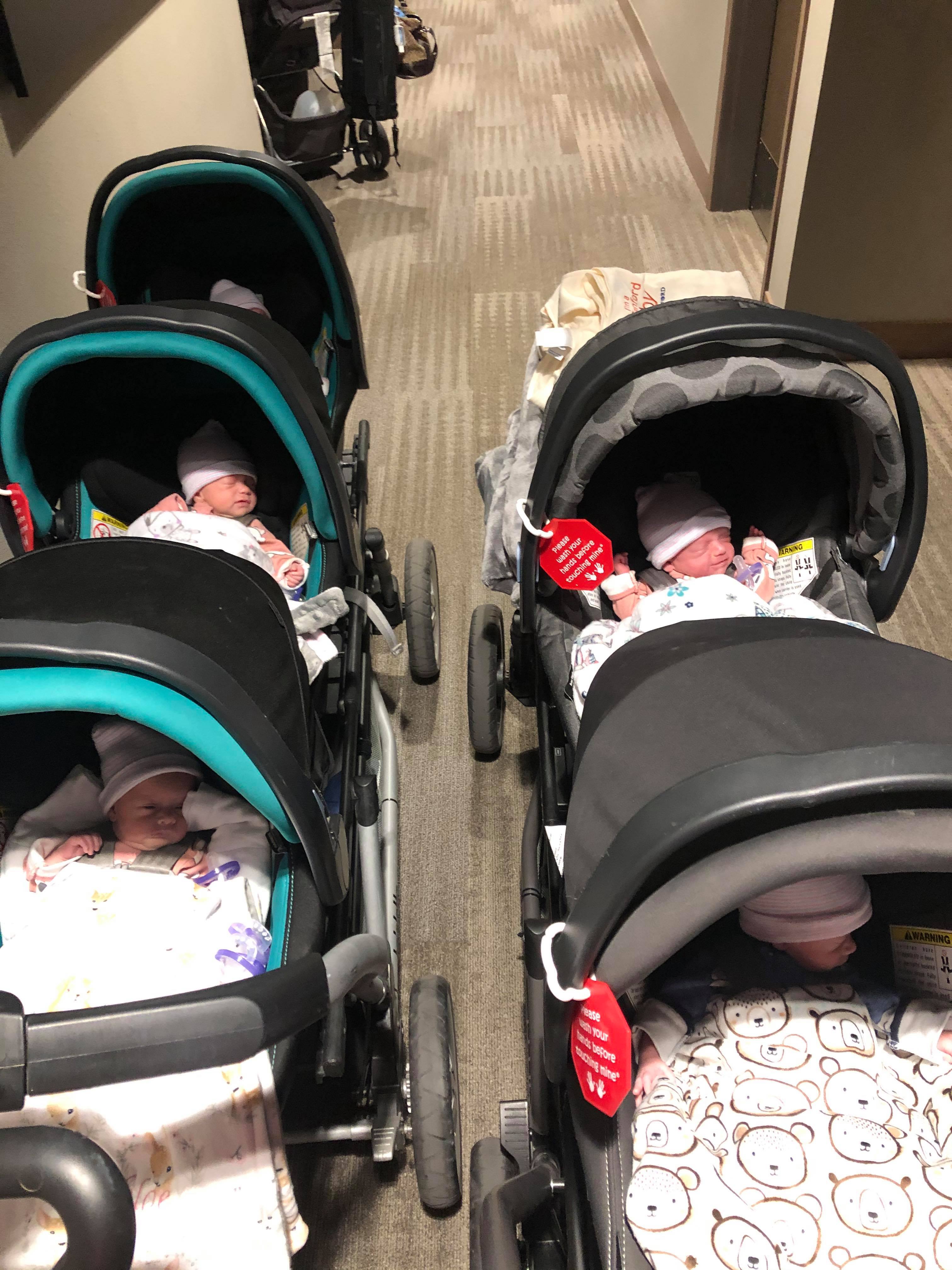 She previously told: "We had decided to try again for a daughter and I became pregnant before we even got a chance to begin IUI.

“I started to feel really weird and I thought, surely there’s no way I could be pregnant because I never actually ovulated on my own.

“But the one time I did we found out we were pregnant and that was a surprise enough in itself.

“But then we found out that we were having five babies and nothing could have prepared us for that.”

The couple went in for an ultrasound at six weeks where they were initially told that only one heartbeat was present and it was unlikely that all five would be viable.

Megan said: “We went back in a week later and saw five heartbeats.

“I was so shocked – the ultrasound technician worried they were hurting me because I was shaking and I said ‘I’m shaking because you’ve told me I’m having five babies.’

“After the ultrasound I told my husband I couldn’t go home because I needed time to freak out away from the kids so we went to his office and I sat in the corner and cried for about an hour.”

But while the news came as a shock to Megan she says that a previous pregnancy had taught her to remain calm.

She said: “My younger son Matthew was born with nager syndrome and we spent about three months in the NICU with him. It was a really hard time.

“I spent my entire pregnancy with him freaking out and I think I realised that didn’t do me any good.

“In an attempt to relax during this pregnancy I began doing a belly picture once a week and celebrated those little achievements.

“Once I had that zen I could just be happy and in the moment.”

Emotions aside, Megan found that there was a big difference between carrying one baby and carrying five.

“There were a lot of differences from being pregnant with one and with five. I couldn’t vacuum the carpet without needing to take a break.

“Standing in front of the mirror to put my makeup on I would become too winded or too tired from holding the weight up and would need to sit down.

“Even half-an-hour was too long to stand!”

But while the pregnancy was a slow plod, Megan was baffled by both the speed and ease of the birth.

She was admitted to Fargo hospital in Sanford at 32 weeks after doctors noticed a surge in blood pressure, and the couple welcomed the quintuplets via c-section on September 2.

“The birth was not what I expected it to be,” said Megan.

“It actually took a lot longer to get my bleeding sorted and me stitched up than it did to get the babies out.”

Within three days of giving birth Megan was discharged despite doctors previously warning that she may require a blood transfusion due to multiple birth complications.

She added: “After a week and a half I was even at the point that I could stop taking pain medication, I can’t complain about recovery.”

And the babies themselves were born without complications but at 32 weeks were premature and kept in the NICU for just three weeks.

Megan said: “We thought they were going to be in the NICU for at least a month or better and within three weeks we got to take them all home.

“The doctors were just as surprised as we were.”

The couple are now settling into home life with their quints, admitting that it has been something of a learning process.

“Life with the quints is chaotic but it’s a good chaos – we’re just so happy to have everybody under the same roof” Megan said.

“My husband and I were up pretty much 24 hours in the first few days because feeds were taking us up to three hours.

“Premature babies take a bit longer to eat so by the time you’re done burping and feeding the fifth one, you have about half an hour before you need to start feeding and burping the first one again.”

But Megan and Joshua have now worked out somewhat of a system when it comes to the quints, but could never be prepared for the amount of work involved.

She said: “We started taking three out at once and propping them up with bottles and burp cloths and we can now get everyone fed in about an hour.

“I had anticipated and prepared for the amount of laundry I would be doing – but it’s even more so than I expected.

“With five babies I sometimes feel like I am living in spit-up. After every couple of feeds I do a load of laundry.

“I end up doing about three or four loads of laundry a day and that’s become the norm now.

Typically busy Megan gets up at 3am every morning for a feed and then again at 7am before trying to squeeze in a little rest between half 7 and 8am before the older boys get up.

She then begins homeschooling Jacob before moving on to preparing and administering Matthew’s medication.

Once Matthew is taken care of one or two of the babies will “start to fuss” and Megan will begin her military style feeding operation.

She explains: “Every feed we change their diapers and log their changes and feeds in an app as well as how much they ate because with five babies it’s easy to forget who did what.

“In between dealing with the quints I’m busy chasing my two-year-old and making sure my seven-year-old is getting his homework done.

“Every once and a while I will have time to vacuum the carpet or do a load of laundry.”

Now a family of nine, Megan and Joshua are being forced to upscale in every area of their lives.

She said: “We’re hoping in two years we will be able to get another house. We are definitely going to need one. This one is already somewhat small for a family of three kids.

“We’ve been looking for a bigger vehicle but we haven’t come up with the perfect solution just yet.

“Everything we’ve looked at has eight seats and we need nine so we have started to look at larger commercial vans.”

While the parents themselves may be taking time to adjust, there is one member of the family who has settled into life with quints like a duck to water.

Megan said: “Our eldest is adjusting really well. He was so excited about the babies from the beginning and was the only one to guess all the genders correctly.

“He told me ‘mom I wished and prayed for sisters’ so he got his wish and is so thrilled and loves helping with them.”

In other real life news, this is what is takes to dress 22 kids as Britain's biggest family show off their huge Primark haul.

And this woman was pregnant with surrogate twins and then the parents pulled out.

Plus this mum who didn't want kids at first now makes her 11 children wear numbers so she can keep track.