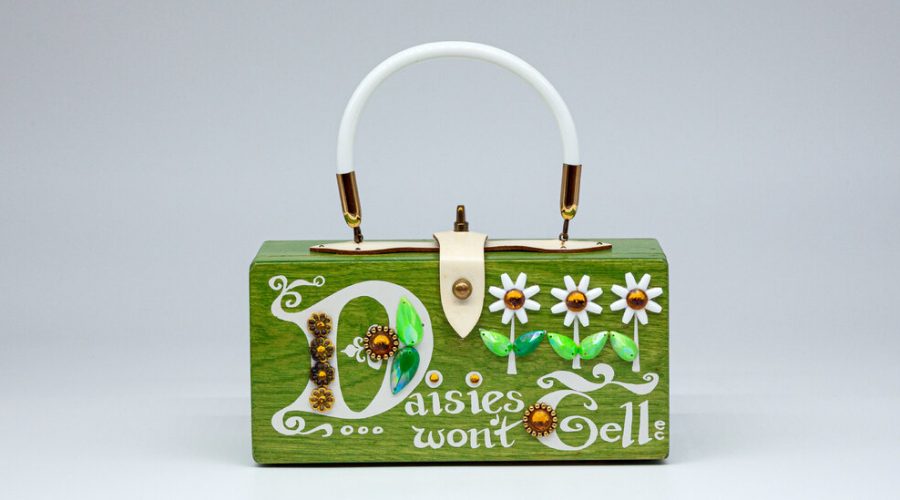 If the handbag is indeed going the way of the hat — not an item we need, as a year of quarantine proved, but a flourish, a fillip, a pick-me-up — then Enid Collins, a prolific accessories designer of the last century, was prescient. “Make something good, something with personality, glamorize it like hell, and then get up and brag about it loudly!” she wrote once, laying out her winning formula to a relative.

Collins was best known in the 1960s for her “conversation starter” wooden purse in the form of a shallow lunchbox: painted or screen printed with flora and fauna, bedazzled with costume jewels and other embellishments, and punctuated with coy epigrams like “Daisies Won’t Tell.” A “Money Tree” series, often bedecked with fake coins, proved particularly popular; “After all, who doesn’t need it?” as she noted wryly in the letter.

Manufactured in the Mayberry-like town of Medina, Texas, with her husband, Frederic, a somewhat frustrated sculptor and aspiring cowboy who oversaw the mechanics, the bags were advertised in The New Yorker, stocked in department stores and boutiques across the United States including Neiman Marcus and Saks, and carried by debutantes, haute hippies and celebrities.

Lady Bird Johnson donated one, “People’s Choice,” to a church auction; her daughter Lynda carried another when she dated George Hamilton. “I have had several of the Collins’s purses — one had play money on it. Some had Texas’s themes,” Lynda Bird Johnson Robb recalled recently in an email. A suede cloth bag with appliquéd birds and flowers remains in the closet of her main dressing room, she said, adding that others might be in her attic.

Relatable! As totes stuffed with life’s entire burden begin to weigh down shoulders of working women everywhere, these perkier, smaller purses do tend to get shoved into storage spaces. 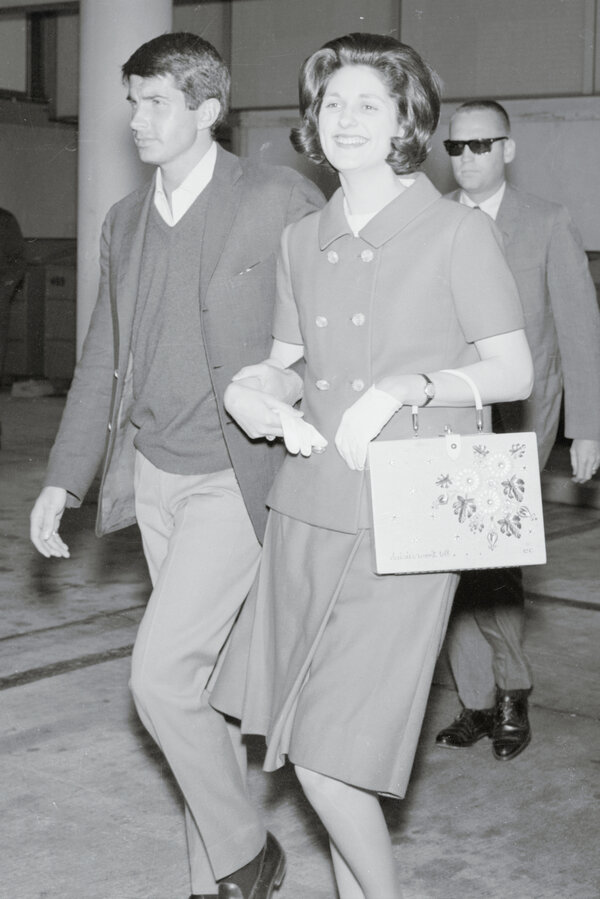 But with their vibrant colors, quadrilateral shapes and crafty vibe, Collins vintage box bags and embellished cloth buckets — which currently trade in the three figures — proved perfect fits for the photo grids of eBay, Etsy, Pinterest and Instagram. The origin of the box bag is as contested as that of the miniskirt, but Collins’s under-credited aesthetic has arguably inspired contemporary brands from Edie Parker to Chanel and Dolce & Gabbana.

And in April, Collins’s son, Jeep (an abbreviation of George Philip), will publish a memoir, “Enid,” drawing from a rich trove of family diaries and correspondence and conjuring a lost, idyllic-sounding world of ranch living when there were no iPhones, and a jury-rigged television got only two channels — “a place that will never be like that again.”

He rode donkeys and go-karts, gathered blackberries and fired clay with his younger sister, Cynthia, who went on to live down the hall from Farrah Fawcett in college and modeled frequently in Collins ads. Their Aunt Jo helped open Hamburg Heaven in Manhattan, and the novelistic book depicts trips there to showrooms and the theater, a Windjammer cruise that helped inspire coveted sea-themed bags, and games of gin 13 with Clyde Cook, the Hollywood actor.

In a video interview from Fredericksburg, Texas, where the company briefly moved operations and descendants remained, Mr. Collins, 72, a former Marine and designer himself of Christian jewelry, spoke eloquently of his mother, whom he called “Mimi,” and who was known for insisting on naps after lunch and other exactitudes.

Eventually she would take an apartment in San Antonio, commuting to Medina in a gold Buick Riviera and divorcing Frederic. The company they had built together was sold in 1970 to the Tandy corporation, which fired Enid not long after. She died 20 years later, comforted by her deep faith and her patchwork quilts.

“She didn’t put up with nonsense, she wasn’t mean or ugly to people but not fooled by foolishness,” Mr. Collins said. “I didn’t realize how important she was at that time, but I knew it was pretty important. The designs were good. For lack of a better word, they were just so ‘together.’ They were colorful — and you know the ’60s were pretty colorful in a lot of ways.”

They might also be the perfect choice for the lurid 2020s; now that many have abandoned even a wallet and the “go bag” or knapsack is de rigueur, the old-school pocketbook is free to re-emerge as ornament or charming frippery.

Collins of Texas is still producing bags in Medina, now led by Goli Parstabar, formerly of Harry Winston. Some bear signature designs like the “Road Runner”; others are more basic feed or saddle bags in materials like crocodile and ostrich; and then there are quieter models such as the Kelly-like “Enid” — made in Italy.

“When we relaunched Collins, the phones started ringing, there were a lot of ambitious designers,” said Sia Parstabar, a partner. “I said, ‘We don’t really need a designer, because there was only one designer.’ We are only doing what Enid did. The artwork was one thing, there are other elements in her creations such as shape, body, the weight of construction — what we refer to as ‘Collins elements.’”

But for some of Enid’s most ardent fans, only the originals, especially those signed by her, will do.

She likened the designing couple to Charles and Ray Eames. “I’ve talked to other collectors, and there’s just something that grabs you. You look at it, you pause,” she said of the boxes, nicknamed “woodchuckles” for their witty tag lines. “I like how the chaos is kind of contained.”

Karen Adler, 57, a self-described “purse anthropologist” in Denver and curator of Finding Enid With Love, an online museum and store, buys and sells jewels for the bags’ repair and is compiling an oral history of Collins enthusiasts. “It’s a labor of love,” she sad, adding that finding out Enid’s marriage had ended had comforted her during her own divorce. “For the last 10 years, I was out there saving her work. And now going through this, she’s saving me.”

31/03/2021 Fashion Comments Off on Is It Time for an Enid Collins Revival?
Lifestyle