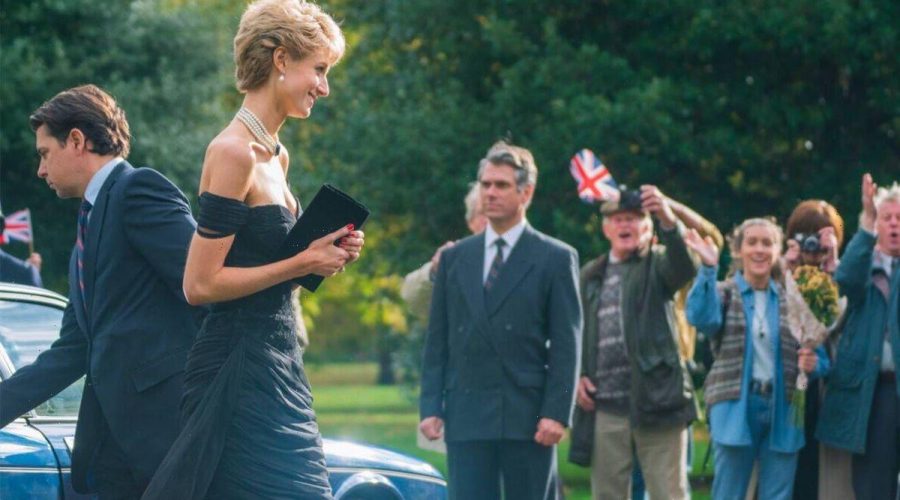 Kate Middleton shows off engagement ring as she uses Lego

Princess Diana owned a huge sapphire and diamond engagement ring from Prince Charles which is recognisable around the world.

The gem was crafted by the royal jeweller, Garrard, and it now belongs to Kate, Princess of Wales.

The 12-carat sapphire sparkler has been replicated for The Crown, with Debicki often wearing the jewel in scenes.

But the ring is particularly prominent in an episode which explores Diana’s controversial interview with the BBC about the breakdown of her and Prince Charles’ marriage.

Beaulagh Brooks, Course Director for BA Hons Jewellery & Objects at Birmingham City University (BCU), said: “It is worth noting the significance of the Princess of Wales‘s engagement ring which is a prominent feature in many of the scenes featuring Princess Diana, especially in season five episode five, where it becomes a constant symbol of her position whilst the storyline explores her estrangement and betrayal by the Prince of Wales.

“Indeed, later in the season she is then portrayed as removing the ring before her Panorama interview with Martin Bashir which the Palace considered to be her betrayal of the Crown.

“Whether this is true it certainly appears to be a symbolic use of this iconic piece of royal jewellery to heighten the importance of the storyline.”

In reality, Princess Diana was known to adore her engagement ring and it’s true she often wore it after separating from Charles in 1992.

DON’T MISS:
Doria Ragland ‘leans over Meghan’ in new photo with Archie [INSIGHT]
Harry challenges Meghan to a game of table tennis in new video [VIDEO]
POLL: Should William and Kate visit Meghan and Harry on US trip? [POLL]

Diana even wore the ring after her divorce was finalised in 1996, although in the last year of her life she appeared to replace her sapphire ring with another blue sparkler comprised of aquamarine and diamonds.

Princess Diana’s engagement ring isn’t the only sapphire jewel which makes an appearance in the latest series of The Crown.

Diana owned a sapphire and diamond choker set on strands of pearls, and it made several appearances during the Princess’ time in the Royal Family.

Diana paired it famously with her midnight blue ‘Travolta dress’ that she wore to a White House event in 1985.

But the choker had perhaps its most famous outing in 1994, on the same night Prince Charles addressed his marriage breakdown for a documentary.

Many saw Princess Diana’s ‘revenge dress’ moment at the Serpentine Gallery in 1994 as exactly that, revenge in fashion form for Charles’ televised admission of adultery.

A huge sapphire choker, paired with a daring black dress by Christina Stambolian, was chosen by Diana as she “wanted to look a million dollars … and she did”, according to her former stylist Anna Harvey.

But another interpretation is that Diana may have worn pearls in tribute to the Queen who famously wore them throughout her reign.

The jewel was also gifted to Diana by the Queen Mother to mark the royal wedding in 1981, making the necklace a royal heirloom.

Beaulagh added: “When Diana is seen in the striking black ‘revenge dress’ and a perfect quadruple string of gemset pearls for the Serpentine Gallery event, it is a clear visual of Diana’s then-current royal position and an accurate representation of her outfit that evening.

“As pearls were a favoured jewel of the late Queen Elizabeth II, it might be the wearing of such a striking pearl necklace by the Princess of Wales which could almost be seen as a reminder to her estranged husband and his lover that she, Diana, remained a member of the Royal Family and Camilla, at that time was not.

“The wearing of the pearls visually aligned her with her estranged mother-in-law the head of the family and may even be considered an attempt to unify two of the most influential female figures in Charles’ life at that moment.”