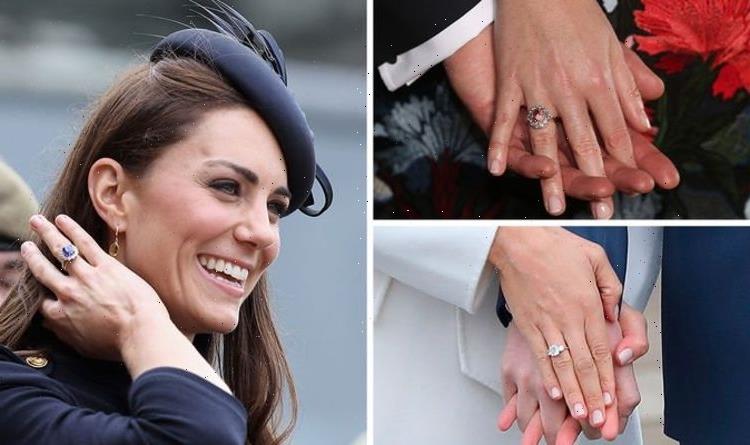 Kate Middleton and family ‘have been on holiday’ says commentator

Prince William and Kate Middleton announced their engagement in 2011, and royal fans were delighted to see the engagement ring which once belonged to Princess Diana on Kate’s ring finger. In the years since, several members of the Royal Family have gotten engaged, including Meghan Markle and Princess Eugenie. But according to jewellery experts, it is Kate’s engagement ring that would fetch the highest sum should it ever part with the Royal Family.

Daena Borrowman, Marketing Manager at jewellerybox, told Express.co.uk that Kate’s engagement ring could be worth up to a staggering £400,000.

“Featuring a 12-carat oval cut Ceylon sapphire surrounded by 14 solitaire diamonds set in white gold, the ring was initially part of Garrard & Co’s catalogue of jewellery from which Princess Diana chose it.

“They had their boom in the early eighties when Prince Charles and the then Lady Diana Spencer became engaged.

“The ring, which is now the engagement ring of the Duchess of Cambridge, renewed a sales boom in sapphire and diamond rings in 2010 when the royal couple engaged, features a stunning Sri Lankan 12 carat cornflower blue oval faceted sapphire surrounded by 14 round brilliant cut diamonds and set in 18-carat gold.

“The ring worn in memory of Prince William’s mother was originally valued at £28,000 in 1981; today the ring is estimated to have an insurance value of approximately £300,000.”

According to the jewellery experts, Meghan’s beautiful ring, which also features diamonds from Diana’s collection, could be worth up to £300,000.

“It is very special because it is flanked on both sides by two smaller round diamonds that are heirlooms from her late mother-in-law, Princess Diana.

“The five-carat jewel was initially set on a simple gold band but has been updated to a slim diamond-encrusted band for a more contemporary look.

Princess Eugenie’s engagement ring, gifted to her by her now-husband Jack Brooksbank, is also thought to be worth a six-figure sum.

Ms Michell told Express.co.uk: “Like her mother, the Duchess of York and her aunt, Princess Diana, Eugenie’s ring has a centre oval precious gemstone and this one certainly has not disappointed.

“It is a padparadscha sapphire surrounded by ten brilliant-cut diamonds and two pear cut diamonds to give an edge to the standard classic cluster.

“Padparadscha is the name given to the corundum gem that bears a mixture of red and yellow, a sort of cross between a ruby and yellow sapphire.

“This beautiful gem is considered amongst the rarest and most valuable of all the corundum varieties.

“With its carefully faceted cut and the set off with the whitest of white diamonds, this ring could easily be worth over £100,000.”