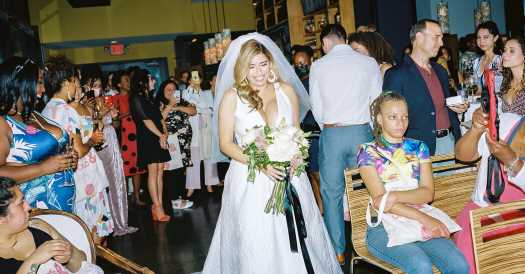 The line to enter the Big Fake Wedding New York City expo at City Winery, in Manhattan’s Chelsea neighborhood, moved smoothly and efficiently last month. Brides and grooms, maids of honor, and a handful of mothers were all smiles. Some were masked; others were not. Everyone seemed glad to be there.

The Big Fake Wedding is an experiential expo company that produces events in 25 cities each year to help support and introduce local businesses to couples and other wedding professionals.

The New York event, held on the evening of July 21, brought 150 in-person attendees and 50 virtual ones — a new extension since the pandemic. There were also 30 vendors, two bands, and a vow renewal for a couple decked out in full wedding attire.

Jennifer Ammons, the owner and chief executive of the Big Fake Wedding, said people were ready to attend expos again. “Earlier this year we did microevents with 50 to 75 people in venues where we were not limited to larger events and saw a slower scale in attendance,” she said. “We could have sold more tickets, but people were slow to come back to events. People are also purchasing their tickets closer to the event to see how they feel and are trying not to overbook.”

For Jackie Lopez, 28, a senior TV producer for Bloomberg Technology, the July event was the first expo she had attended since the pandemic, and as a future bride. “All of my married friends loved going to these,” she said. “I expected this to be part of my wedding process, too.”

Ms. Lopez lives in Long Island City, Queens, and came with her two sisters and mother. She became engaged on Sept. 3, 2020, during a time when many events were paused. She is getting married May 14, 2022, in Westhampton, N.Y. “I wanted the same opportunities my friends had, so it’s really great to be here,” she said, “especially since we put off much of the planning.”

Aside from picking up tips from professionals and finding unexpected inspiration — “Who even thought about tablescaping?” Ms. Lopez said — she noted a sense of bonding and thoughtfulness. “It’s nice to be with brides who have gone through the same thing as I have, and to be part of the camaraderie,” she said.

Jasmin Waterman, 40, a nursing professional development specialist at NYU Langone Medical Center, heard about the event through her wedding planner. “When you’re at someone else’s wedding, you’re not looking at their event through the lens of a bride and groom,” she said. “Here you are.”

Ms. Waterman, who lives in Brooklyn, got engaged on Dec. 30, 2020; her wedding date is Aug. 27. “This is the first one I’ve been to,” she said. “We haven’t finalized everything so there’s still an opportunity to add to the décor, to get ideas, see what we’re missing and maybe sign with another vendor we don’t have.”

That was exactly what Sherilyn Thomas, 52, who owns CoziTreats, an artisanal dessert shop in Brooklyn, was hoping to hear. She was pleased attendees were still reaching for her cake pops, macarons and chocolate cream puffs. “I almost talked myself out of coming,” Ms. Thomas said. “You have to push yourself to be uncomfortable and get back to a new normal. Everyone has returned to planning. I’m glad to be getting ‘wows’ and the opportunity to show people what I’m offering.”

Before the pandemic, wedding expos were a rite of passage for many brides and grooms. Found in cities around the country, they could be more intimate, with only 100 to 200 people attending and a focus on local businesses, or mammoth, catering to 600 to 1,000 people and with more than 100 vendors. They could be held in small venues or amphitheaters and stadiums. Some rotated locations, others remained in the same space.

Today, many expo producers, regardless of size or location, agree that little has changed in terms of who is paying for a space to be seen: photographers and videographers, cake makers and confectioners, designers and destination properties, florists and décor specialists, hair and makeup artists and D.J.s.

This year, however, Covid-themed stations — mask makers, hand sanitizer companies, Plexiglas creators or on-site Covid testing companies — seem scant. “So far, I’ve not gotten any requests or inquiries for Covid specific vendors,” said Tatiana Byron Marx, who founded the Wedding Salon 18 years ago. The company, based on West 35th Street in New York, produces and hosts nine wedding showcases a year and charges $50 per ticket. In 2020 Ms. Marx was forced to cancel her last two shows and laid off 14 staffers. Two months ago she started hiring again. The Wedding Salon’s first show, after being dark for more than 16 months, will be held on Sept. 20, in Miami. Houston will follow six days later with New York showcasing in November.

“We are starting with two markets that are widely open with less restrictions,” Ms. Marx said. “Then we’ll head to Los Angeles. Then we’re back to our normal schedule.” Over the last few weeks Ms. Marx said outreach from inquiring vendors has increased; she’s now getting 25 to 50 calls per week, though that is still down from the 50 to 100 before Covid.

Couples, too, are re-emerging. “They want to taste the cake, try on the makeup, talk to several photographers and try on dresses, all in one place and in a few hours,” she said. “You can’t do that online. Here you can because everything is live and in person. That’s why these are important.”

In terms of pandemic precautions, the Wedding Salon asks for proof of vaccination or requests that vendors or attendees wear masks. Temperature checks will happen as well.

“We used to have vendors lay out food, but everything will be served separately or prepackaged, even the cake tastings,” Ms. Marx said. “Pipe and drapes will separate vendors from each other, but we had been doing that for years.”

Like the Big Fake Wedding, Ms. Marx will offer entertainment, including a D.J., bands, even specialists to teach guests the tango. “The variety acts are what guests remember,” she said. “Couples still want them so we still offer them.”

Bill Heaton, who has run the Great Bridal Expo for the past 42 years, usually spends September through April touring 25 to 30 cities, always ending in Silicon Valley, Calif. About 1,200 to 1,500 people attend his shows at $10 per ticket. Sixty to 100 exhibitors are highlighted.

“We had to cancel four or five shows,” he said. “But we started up again a few months ago. There are probably couples out there that are reluctant, but that’s not what I’m seeing from events over the past 30 days.”

During September and October, shows will be held in Baltimore, Boston, and Atlanta, among other cities. More than 20 expos are already set for 2022.

Though sales are down, Mr. Heaton said business interest has never been stronger, especially from wedding planners, a newer category for him.

“There’s an urge to get back to the way business was,” he said. “Couples want personal interaction. They want to make sure they’re compatible with the people they are selecting. That’s hard to do virtually. Seeing 100 different companies in a grand ballroom” — and sampling products and hearing from vendors directly — “is very different then a Zoom experience.”

Like Mr. Heaton, Ms. Marx was “cautiously optimistic,” she said. “We have fears. We have no idea what’s in store. If we need to shut down again we will. But right now we have to proceed forward.”

By 9:15 p.m., two bands had performed on City Winery’s sizable stage. The married couple had renewed their vows. Raffles had been claimed. Ms. Ammons looked pleased as she handed out white send-off streamers to exiting guests.

“This was a successful evening,” she said. “Meeting local vendors, interacting with other couples and seeing another couple get married seals the deal. It brings the wedding to life.”