George Habibeh has been designing couture for more than a decade. Which is pretty impressive for a 21-year-old.

"I was a bit of a weird kid," he says. "I've always loved working with fabrics … I remember cutting up curtains and my mum's old dresses." 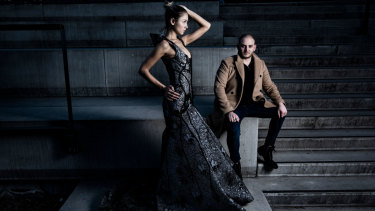 TAFE graduate George Habibeh, 21, will be the first designer to show couture at the MBFWA student showcase.Credit:Nic Walker

After making creations by hand, Habibeh asked for a sewing machine for his 11th birthday and taught himself how to use it by watching YouTube tutorials.

With the pieces he designed for his mum ("she's my muse") attracting attention among family and friends, at 13 Habibeh applied for an ABN and started to build a business through word of one particular mouth.

"My mother is a right chatterbox like I am, so she was my networking girl," he says.

"I live in Greystanes, so I was hitting a lot of the 'wog' market, the Lebanese, Greeks, and Italians: all of these people who love extravagant dresses, who love beading."

Habibeh, who graduated from TAFE NSW's Bachelor of Fashion Design last year, is one of six students who will present their collections at Mercedes-Benz Fashion Week Australia's graduate show.

It is the first time a couturier has been featured in the show, which now in its 21st year. Habibeh will show the six designs he presented as part of his final coursework, as well as four additional pieces.

The situation was very different the last time he was making clothes as a final assignment: attending an all-boys high school with no textiles class, it took some creative thinking for Habibeh to fit his passion into an otherwise very academic schedule – he studied chemistry, biology and four-unit mathematics for HSC.

"I kind of screwed the system up and said, OK, I'm going to take visual art but I'll major in 'wearable art'," he says, although the maths wasn't necessarily a waste.

"That's how I figured out how to create garments, how to measure the patterns."

Abandoning his plans to study medicine, Habibeh enrolled in TAFE after high school because his parents wanted him to have "some sort of degree".

"I used to just cut my patterns on newspaper, I never used the on-book methods they use here," he says, noting that he still really struggles to sketch a design before he sews it.

After selling his first dress for $100 as a teenager, wedding gowns from George Habibeh Couture now start at $6000, with his most expensive creation – an elaborately beaded evening gown, which will feature at his MBFWA show – priced at $45,000. Each dress can take up to 150 hours to make.

Habibeh's studio is still at Greystanes, although he now fields enquiries from further afield, largely thanks to social media. His typical client "has some ethnicity behind them", but he doesn't want to be labelled as a brand for any particular community group.

"I love the idea that this is not a Lebanese brand, or an Arabic brand, I want this to be a brand for everyone. And, hopefully, one day, we can hit all parts of Sydney, and even Australia." 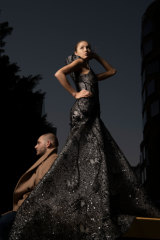 George Habibeh’s elaborate designs are priced at up to $45,000.Credit:Nic Walker

Listing Alexander McQueen and Elie Saab among his inspirations, Habibeh says he is "committed" to couture ("I love to know who my customer is"), and wants to design for women young and old. While comparisons with fellow south-west Sydney native Steven Khalil – whose designs have become a given on any Australian A-list red carpet – are easy to make, Habibeh stresses that he wants to be his own person.

"I love Steven Khalil, but I'd love to be something different," he says.

Habibeh's ultimate goal is to have a literal "maison de couture": a property in which he could both live and create. Although, he might be already there.

"I have a freaking water bed in my studio now, because I'm up every [morning] at five o'clock sewing."

08/05/2019 Fashion Comments Off on Meet George, the couturier who taught himself to sew off YouTube
Lifestyle