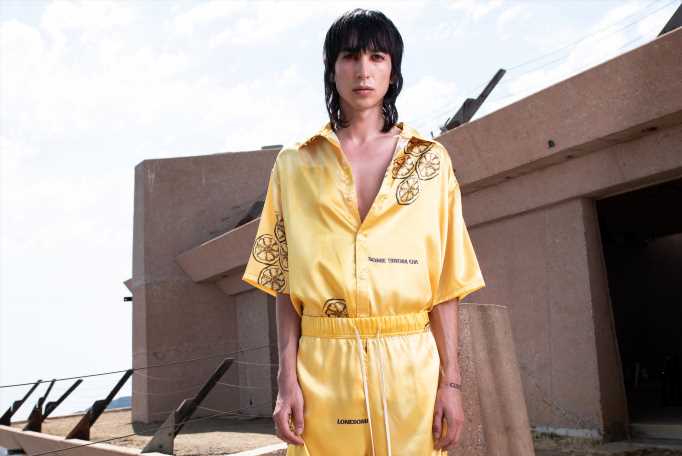 “Lonesome No More!” is a great, hopeful show title for those lucky enough to see a light at the end of the pandemic tunnel. Canadian designer Joey Gollish’s spring collection had a high feel-good quotient with its loose, easy shapes, sunny colors and an allure that hovered somewhere between a beach party and a nightclub.

His show video depicted models strolling through a groovy, abandoned structure set with giant speakers as day yielded to evening. “All we want is a hooded shirt and an ecstasy psychosis,” was a snippet of lyrics that spoke to Gollish’s fascination with retro club culture, here a reference to the acid-house explosion in the 1990s, when Manchester’s The Hacienda was ground zero for that scene.

There was also a strong ’80s feel to the baggy jeans, demonstrative shirts and sloping, oversize knitwear. Gollish, who has a thing for circles, used lemons as a motif in lieu of smiley faces, a wink to the citrus that demonstrators used to neutralize tear gas during the student protests in France in 1986 and 1987.

“Wearable rave clothing that feels elevated,” was how Gollish summed up his spring effort during a preview. “The reason that I focus so much on nightlife is that I think for a lot of people, going out is when you wear whatever you want to wear, and be whoever you want to be and act however you want to act. In a way, it’s the truest version of yourself.”

His video certainly captured that exhilarating feeling of heading out for a big night, while the look book revealed the intricate patchworking and dyeing techniques that give his clothes a nostalgic elan. Lead us to the rave, Mr. Saturday!