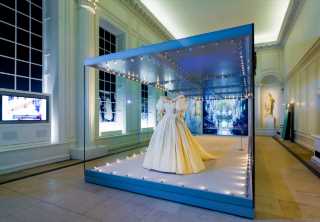 LONDON — No, that wedding dress isn’t for rent.

Princess Diana’s wedding gown, in all its sparkly, fairy-tale splendor, is the centerpiece of a new show at Kensington Palace and a sign of just how much brides in the public eye have changed since Prince Charles and Lady Diana Spencer wed in July 1981.

The ivory dress with its thousands of pearls and sequins, its puffed sleeves and 25-foot train has been loaned by Princes William and Harry, who have set aside their well-publicized differences to pay tribute to their mother and to enrich the new show, “Royal Style in the Making,” which opens Thursday at the Orangery, part of Kensington Palace.

The taffeta dress, by the former husband-and-wife team of David and Elizabeth Emanuel, had been designed for a 1980s TV audience and to suit what the public at the time wanted to see: a fairytale princess known for her love of frills, bows and romantic Laura Ashley wardrobe.

The ready-to-wear dress, designed by the Athens-based Christos Costarellos, was made for Instagram rather than TV, with Symonds choosing to signal her eco-credentials and send another sort of message to a generation that’s less concerned with opulence and ownership than it is with overstuffed landfills, carbon emissions and ocean pollution.

My Wardrobe HQ said it has observed an increase of more than 700 percent this year alone in brides renting from the site and booking its try-on consultation services.

Even Emanuel, who has recently taken back possession of her name and trademark, has been flying the green flag with a new collection of organic, sustainable T-shirts and plans for an “e-couture” sustainable line of rtw.

While not rentable, resalable or even recyclable, the outfits and many sketches on show at the Orangery are enduring pieces of history that have much to say about 20th-century British royals, and why they chose to work with certain designers. 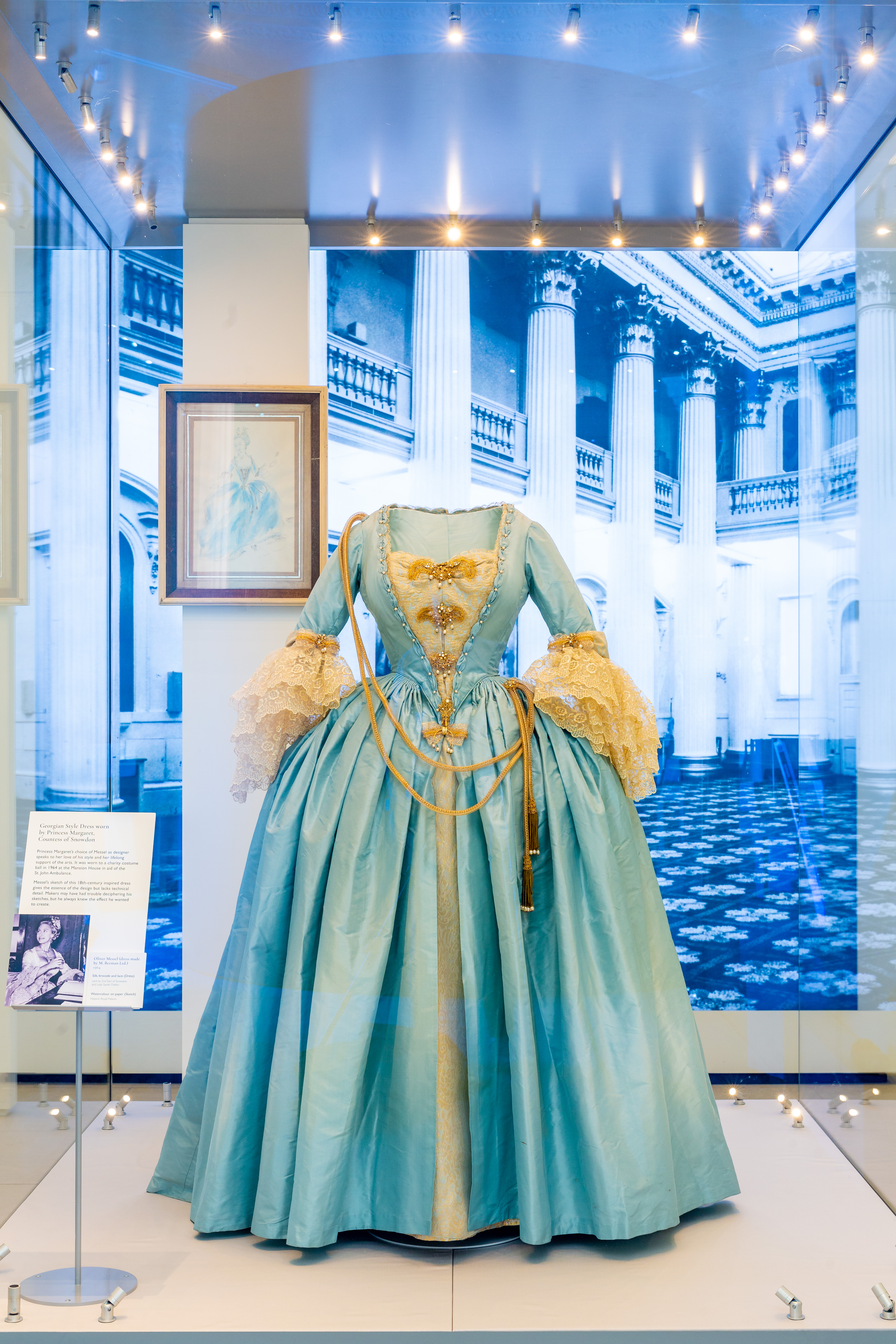 The 18th-century costume that Oliver Messel created for Princess Margaret for a 1964 charity fundraiser. Image Courtesy of Kensington Palace/Richard Lea-Hair

“Royal dress isn’t about fashion,” but rather communication with the public, said Claudia Acott Williams, curator at Kensington Palace. “It’s traditionally been about marrying stability and continuity with innovation.”

She said the looks on display were a reflection of “deliberate choices” made by the royal and her designer to cultivate an image in the public eye.

During a walk-through of the show, Acott Williams also described Diana’s choice of the Emanuels as a “bold commission” not because the dress was huge and the veil and train seemingly endless, but because the two designers were young, and didn’t necessarily understand the formalities of court dress.

She noted that the designers were under pressure “to turn a young girl into a princess” and to deliver “what people around the world wanted to see.”

Diana’s dress was also the first royal wedding gown in history to be designed by “new” designers rather than establishment ones, such as Norman Hartnell or Hardy Amies.

The wedding dress commission wasn’t the only time that Diana was bold with her wardrobe choices, as the world became fixated with the style of the young princess, who would propel a whole list of British designers — from Victor Edelstein to Catherine Walker and more — into the headlines.

“She never wore hats when she was visiting children because she said, ‘You can’t cuddle a child when you’re wearing one.’” Instead, she opted for big jewelry that children could play with, said Acott Williams.

She pointed to a David Sassoon sketch known as the “caring dress” a colorful number that Diana wore to cheer people up during an official visit. “She wore it so much the press got bored of it,” said Acott Williams.

The show also spotlights Diana’s relationship with David Sassoon, who designed much of the princess’ working wardrobe under the Bellville Sassoon label. 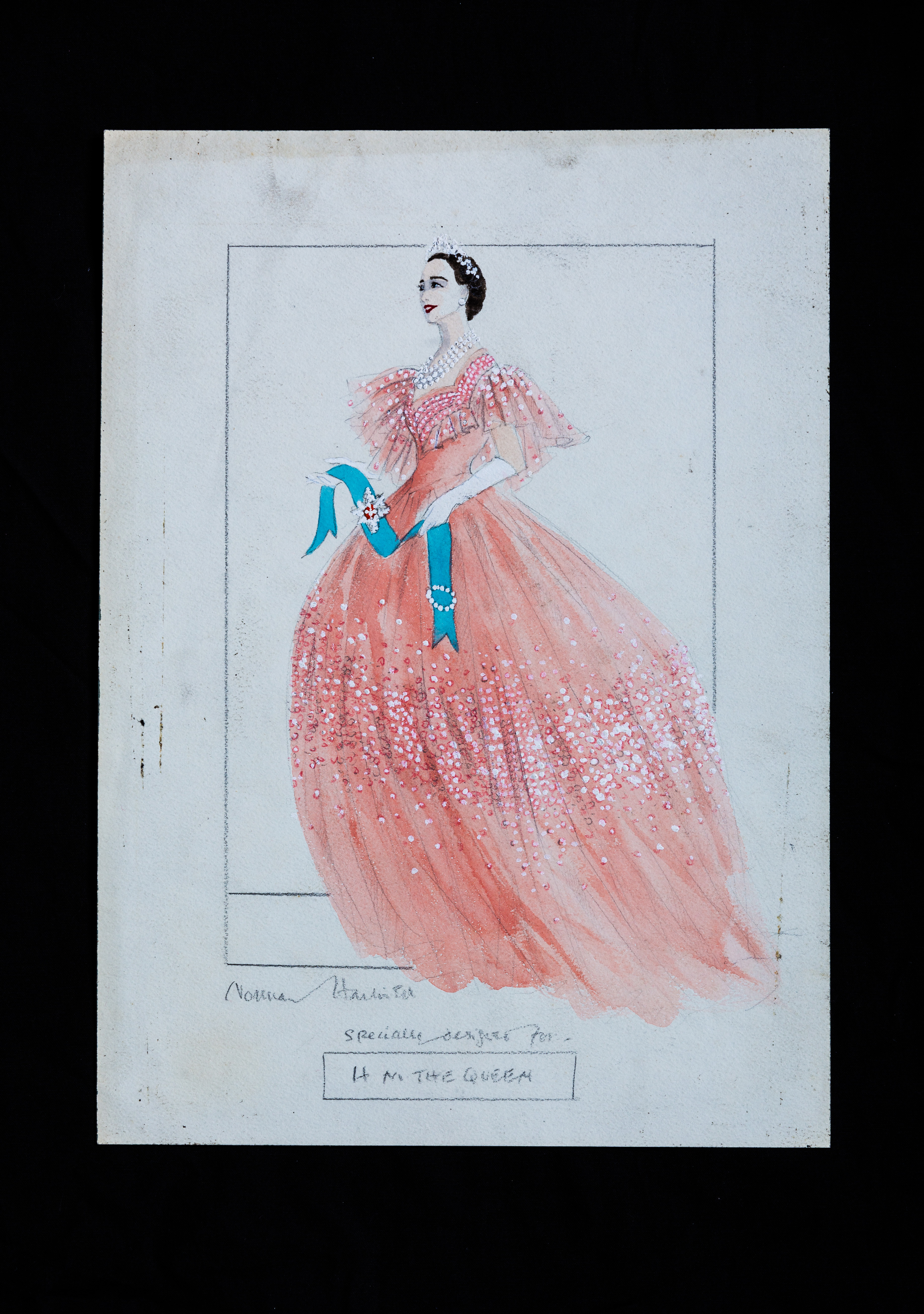 A design by Norman Hartnell for Queen Elizabeth the Queen Mother. Richard Lea-Hair

Sassoon worked with Diana to map out professional looks for the princess, who began taking on public duties and charity patronages as soon as she was married. Sassoon would create more than 70 garments for her in just under 20 years.

In a video interview that’s part of the exhibition, Sassoon says Diana was “very hands-on selecting what she wanted, and understood what the public wanted from the clothes she wore.”

Another of Bellville Sassoon’s designs, Diana’s grapefruit pink “going away” outfit, has been reunited at Kensington Palace with the wedding dress for the first time in 25 years.

The show also looks at how Norman Hartnell helped to craft an opulent, glamorous image for Queen Elizabeth the Queen Mother who was so taken with style and dress that she organized Buckingham Palace’s first fashion show in 1941.

Another of the Queen Mother’s dresses, Hartnell’s bias-cut, black velvet evening gown with pearled shoulders and neckline — a design that looked as if it came straight from the set of “Dynasty” -— is on display for the first time in the show.

The show also reveals Princess Margaret’s sense of fun. The late princess tapped the stage designer Oliver Messel to create an 18th-century Marie Antoinette-style gown, in blue and gold with lace sleeves, for a charity costume ball in the early 1960s.

Acott Williams said the extravagant dress, accompanied by an image of Margaret with period hair and makeup showed the big role that theater had in the royals’ lives and also demonstrated how Margaret “had more freedom to play with clothing” than her sister, Queen Elizabeth.

The show’s headline sponsor is Garrard — the royal jeweler that designed Diana’s sapphire and diamond engagement ring that now graces the finger of Prince William’s wife, the Duchess of Cambridge.

The exhibition runs until Jan. 2, 2022 at the newly renovated Orangery, which will return to being a café and events space once the show closes.