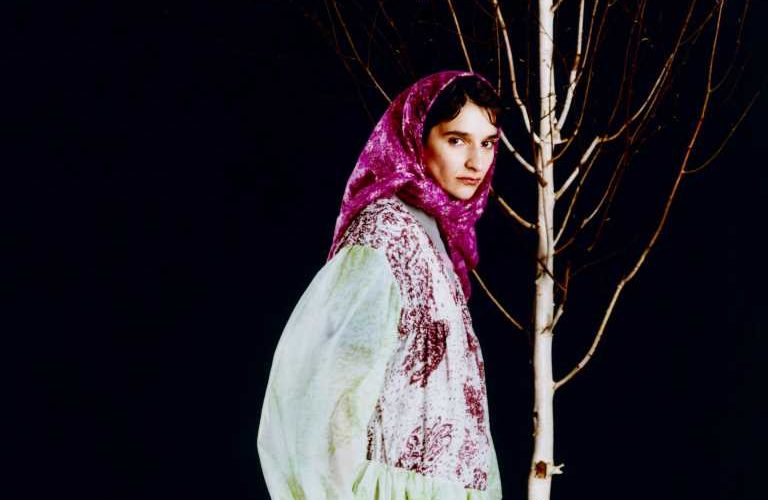 The English-Iranian fashion designer Paria Farzaneh continues to express her political and social commentary with a fall collection titled “Country Of The Blind.”

The blind here refers to those who follow rules without questioning the system and fail to see beyond difficult situations they are in, such as the COVID-19 pandemic.

Influenced by the 1996 Iranian drama-documentary “Gabbeh” directed by Mohsen Makhmalbaf, which focused on rug makers living in the mountains in Iran, free from strict government control, the collection features easy to style, streetwear-inspired items that are both suitable for nomad life, as the film depicted, or urban living, such as headscarves with abstract Persian patterns, knitted bags, padded jackets, patchwork parkas, and whip-stitch jeans.

“I just found it so interesting that people like this still exist, whereas they might feel like characters to us in the western world. Those people are living their true lives. I want to have this sporadic and escapism [feeling] in almost a costume way. Everything we wear is more of a deception of how we feel. After being inside for so long, people going through so many hardships, I feel like why does it have to be so serious? Why can something just be fun, and be these characters in this world?” she said.

The collection is also accompanied by a social study in the guise of a fashion film. Farzaneh borrowed Canadian choreographer Noemie Lafrance’s social-dancing experiment and asked the models to dance and copy the one that they think dances better until everyone is doing the same dance.

“They had no idea they are gonna be a part of this social experiment,” said Farzaneh. “Nobody was questioning what was going on. We were hoping that some people would just say no, but they all did it. In fact, they all did it three times. It’s interesting to see the power of influence. If you are the person of authority, thee’s really not that many people will fall out of line.”

While the outcome of the experiment was not what she hoped for, Farzaneh wants to encourage everyone to just be themselves, and prioritize what they think, instead of what they are told.