The cloth merchant Philip Pittack began in the rag trade as a teenager crawling beneath the cutting tables of garment factories in the East End of London, stuffing a sack with waste wool and cotton as raw material that could be spun again and otherwise re-used. This was his education in fabrics, rubbing them between thumb and forefinger, exploring weave, testing drape and fray in the hand. In over six decades in textiles, Pittack, who has died aged 76 of Covid-19, became a repository of practical knowledge, with a sensuous appreciation, like a vintner’s taste, that couldn’t be put in a book or digitised, only shared person to person.

He did that through his business with Martin White, the Crescent Trading Company of Spitalfields, east London. “No!” reads the notice on its Instagram site. “We don’t sell online. Fabric has to be touched!” Crescent has been as much information exchange as sales place, serving British designers including Vivienne Westwood (a mill-town girl who knows a quality worsted when she strokes it) and Christopher Raeburn, Savile Row tailors, and theatre and film designers, as well as actors. 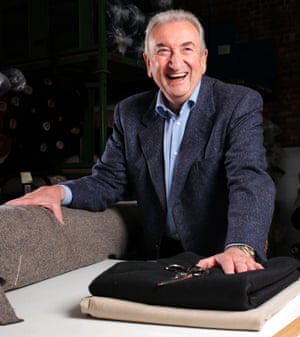 It also became a social destination for fabric geeks who lug empty suitcases there to fill, and especially for fashion college students about to tackle their first-term-project black wool trousers – Pittack let them handle barathea, panama and gabardine, and so learn that the word “wool” covers many weights, weaves and possibilities. He attended their graduation shows, led hands-on workshops, and was gratified when customers tagged Crescent in online pictures of finished outfits.

When Pittack and White set up the warehouse in the early 90s, in a handsome if chilly Quaker Street stable block backing on to the railway, there were around 30 such firms close by, linked to 350 years of local industrial history, from migrant Huguenot weavers through to piece workers for West End stores and the kind of garment factories where Pittack once dragged his sack. Crescent outlasted them all. Its unrepeatable stock, which might include couture-level cashmere, vicuna or guanaco, was sourced from surplus bolts, overruns and clear-outs, often from the surviving mills of the UK and Ireland; the natty-suited Pittack had dealt with them since the days when such mills filled the landscape. “We’re the dustbin of the trade,” he told the Spitalfields Life blog, which celebrated Pittack and White as local heroes, “but what a lovely dustbin.”

He never intended to follow the family into fabric. His paternal grandfather, a weaver from Poland, had become a rag merchant on arrival in Britain, and his father, David, took on the business. The boy was born in Virginia Water, Surrey, to David and his wife, Tillie, raised in Lower Clapton, east London, and educated at Upton House school, Hackney. He meant to turn his pocket-money job installing televisions into full-time employment but when Philip was 14 his father set him to sort cloth remnants by fibre and grade, and at 18, gave him £100 working capital to bid for tons of waste and build up an East End round. Pittack took years to work up to deals for “parcels” of thousand of yards, buy a crucial van to shift it, and become a merchant of whole cloth on his own account.

He had long known White, over a decade his senior and in the trade since his own teen years in Soho, when textiles still required ration coupons. They partnered to sell in volume, full bolts not cut pieces, to UK manufacturers. As those folded, or established overseas production, Crescent’s customers changed to young designers starting out in East End workrooms, creating limited-run lines in excellent, often traditional, materials, an approach that Westwood had taken in the 80s. Raeburn, when an absolute beginner, pleaded to buy just a length, and Crescent evolved; fabrics were sourced and sold in smaller amounts, right down to the remnant, attracting more students and crafters. All appreciated the rare chance to enthuse with other fans, some famous, over a roll of violet Donegal tweed.

The old building was redeveloped after 20 years, and Pittack trundled and carried its stock across the street to a new, nondescript, industrial unit. One night in 2012, when he and White were at the Mansion House in the City to support a student’s work in wool, a serious fire broke out at the unit, and their goods were charred, smoked or water-spoilt. White coaxed a demoralised Pittack into operating from a shipping container (they sold little, but kept their Quaker Street presence, as much their home as their homes) while they cleared the ruined unit and searched for fresh stock, ever harder to find. Pittack’s pleasure was always as much the hunt, the deal, as the sale.

Crescent re-opened in 2013 more than ever a club venue, with the double act of Pittack and monacled dandy White as comperes, sympathetic to a young audience never trained to use any sense but sight. Pittack always cut generous swatches because the standard stamp-sized sample was too mean to understand cloth: “We touch a fabric, we feel it, we know what it is, what the handle is and how it’s going to make up,” he said. The ever higher rent and rates threatened Crescent, but only the Covid-19 lockdown shuttered it, and Pittack went into hospital expecting to be back soon among its racks.

He is survived by his second wife, Joan “Bunny” Barnett, and Daniel and Nicole, the children of his first marriage, to Joan Lewis, which ended in divorce.