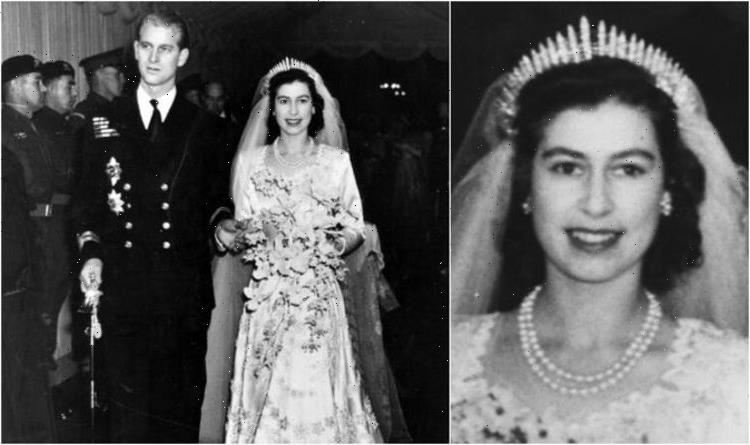 The Queen wore Queen Mary’s Fringe Tiara for her wedding day, which was a piece commissioned by Queen Mary herself. Hugh Roberts, author of ‘The Queen’s Diamonds’ famously described Queen Mary’s fringe as a “new, smaller, neater and more modern-looking tiara.”

Queen Mary’s fringe tiara was made of gold and silver diamonds by E. Wolff and Co. for Garrard in 1919.

The diamonds themselves are even older, as they were a part of a necklace made by Collingwood which Queen Victoria gifted to Mary in 1893.

Queen Elizabeth also has Queen Alexandra’s fringe kokoshnik tiara, plus a diamond fringe necklace which belonged to Princess Victoria the sister of George V, and the ‘City of London’ fringe necklace she received as a wedding present in 1947.

But famously there was a tiara mishap at the royal wedding between the future Queen and Prince Philip.

When the tiara was placed on the bride’s head, it snapped and had to be quickly mended by a jeweller from Garrard before she could leave for Westminster Abbey.

In the close-up wedding photos of Queen Elizabeth, there is a small space between the centre fringe and the larger spike to its right.

That space is a result of the hasty repair of the frame, however, luckily it managed to be fixed so the Princess could wear the beautiful tiara.

The Queen relayed this story to the Duchess of Cambridge when they toured a Buckingham Palace exhibition of Kate’s wedding dress in July 2011.

Queen Elizabeth said: “The catch, which I didn’t know existed, it suddenly went.

“I think they taped up the spring,” she recalled.

According to the book, ‘Garrard: The Crown Jewellers for 150 Years’, the Queen Mother remained calm amidst the chaos, saying: “We have two hours and there are other tiaras.”

The book mentions how a police escort even accompanied the jeweller to the Garrard workshop for the repair.

The second Windsor bride to wear this tiara was Princess Anne, who wore the fringe at her wedding to Mark Phillips in 1973.

This tiara remained in the Queen Mother’s jewellery collection until her death in 2002.

Today, Elizabeth II owns the piece, and in recent years, she has occasionally worn the fringe at special events and in portraits.

In 2020, Princess Beatrice became the first bride of her generation to wear the fringe tiara and looked gleaming in her wedding photos.

25/08/2021 Fashion Comments Off on Queen Elizabeth: The tiara malfunction which caused mayhem at her wedding
Lifestyle