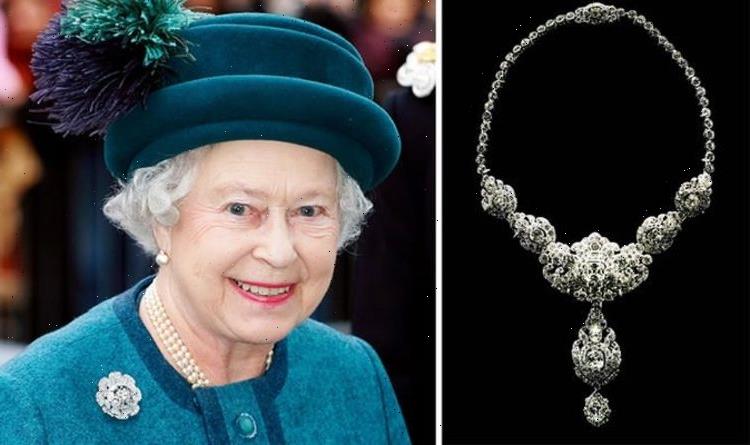 The Queen has an incredible collection of gems and jewels, some of which are worth millions of pounds. Express.co.uk spoke to Steven Stone’s Creative Director, Maxwell Stone about the Nizam of Hyderabad necklace which is said to be the most expensive piece of jewellery within the Crown Jewels collection, and which royal has worn it.

Kate Middleton’s dresses have been complement by magnificent jewellery on multiple occaions.

In Feburary 2014, the necklace was worn for the first time by the Duchess of Cambridge.

She was attending an event at the National Portrait Gallery and paired with with a navy-blue Jenny Packham gown.

How did the Nizam of Hyderabad necklace join the Crown Jewels collection?

The necklace was  wedding gift to Queen Elizabeth II, who at the time was then Princess Elizabeth, from the Nizam of Hyderabad in 1947.

Asaf Jah VII was the ruler (or Nizam) of Hyderabad, which is located in the south-central part of the sub-continent of India (which was then under British colonial rule).

Considered one of the richest men in the world, the Nizam bestowed an incredible gift upon the bride-to-be: he instructed Cartier to let her choose anything she wanted.

The then-Princess Elizabeth chose two pieces: a floral tiara, which included removable elements that could be worn as brooches, and a coordinating floral necklace.

Speaking about the necklace, Steven said: “This is by far one of the most precious pieces of jewellery from the British Royal Family.

“The necklace, which was made by Cartier in 1935, is extremely intricate featuring over 50 diamonds nestled in an abstract floral design.

“With an array of enormous pavé set stones and a detachable double-drop pendant, the necklace features 13 emerald and pear-shaped diamonds linked to a chain of a further 38 brilliant-cut stones.

“A piece like this is truly one of a kind,” Maxwell commented.

As for how much the piece is valued at, the expert revealed: “This unique necklace is likely to be worth around £65million to £70million, making it one of the most valuable royal family pieces we’ve seen.

“The necklace was a wedding gift to Princess Elizabeth from the Nizam of Hyderabad, who was known at the time as one of the wealthiest people in the world.

“It is believed that the Nizam of Hyderabad requested Cartier allow Queen Elizabeth II to choose anything she fancied from their impressive collection of jewels.

“The Queen opted for a tiara with three detachable flower brooches and what we now know as the Nizam of Hyderabad Necklace,” he added.

There are many other expensive items in the Crown Jewel collection.

The Williamson Diamond Brooch is said to be worth a huge £25million.

The Greville Emerald Kokoshnik Tiara is said to hold a value of £10million and Princess Eugenie wore it for her wedding in 2018.

As for the own Queen’s wedding tiara, the Queen Mary Fringe Tiara is valued at £5million.