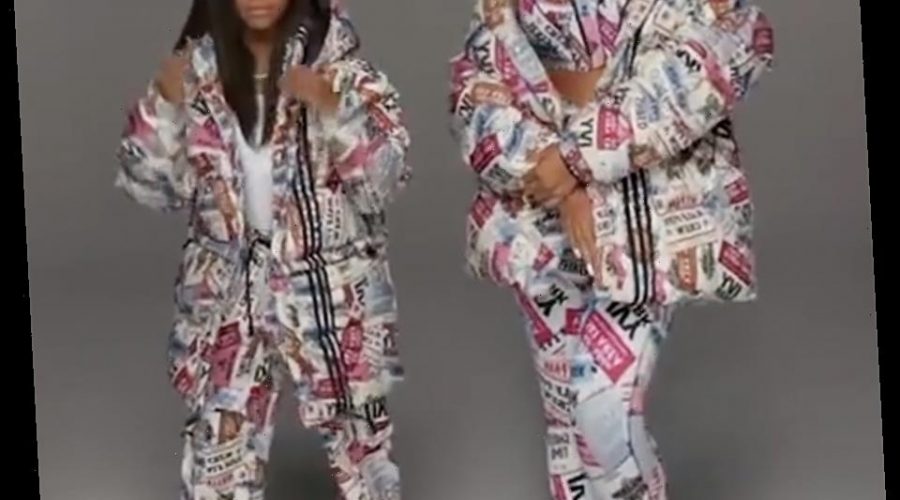 Blue Ivy Carter may only be 9 years old, but if her major modeling moment with mom Beyoncé for Ivy Park's latest collection is any indication, she's well on her way to becoming one-to-watch in the fashion world.

In the photos, Beyoncé and Blue posed side-by-side in a vibrant graphic-print puffer jacket and matching bottoms in the same color pattern.

Blue showed her personality modeling another monochromatic look — a cropped jacket, patent leather pants, a fanny pack, face covering and chunky sneakers — as she playfully danced and held up a peace sign to the camera. Like her daughter, Beyoncé modeled her own head-to-toe camel Ivy Park ensemble, but the singer's look showed a bit more skin. In addition to posing in various brown bralettes, slouchy pants, jackets and even a bucket hat, the star wore a puffer stole over her shoulders and a matching thong bodysuit which revealed her butt as she turned to the side in the campaign video circulating on social media. "Blue Ivy is just so iconic," one person said on Twitter. Another wrote, "This is so beautiful! I can't wait!"

"I applaud Blue Ivy's kindness to let those people star next to her in this video !!" another Twitter user jokingly said.

Blue has already achieved her fair share of impressive accomplishments, including earning her first Grammy nomination this year.

At the time of the 2021 Grammy nominations, only her mother Beyoncé received a nomination for "Brown Skin Girl," even though Blue can be heard singing a few lines on the track and also received a writing credit for her contributions. However, Blue's name was later added to the list of nominees on the award show's website, the Associated Press first reported. The proud mom of three recently spoke to British Vogue for her December cover story, revealing that she and Blue have a special relationship when it comes to celebrating each other's accomplishments.

"When I tell her I'm proud of her, she tells me that she's proud of me and that I'm doing a good job. It's teeeeeew much sweetness," the Beyoncé said. "She melts my heart. I believe the best way to teach [my kids] is to be the example."