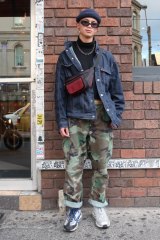 I AM AT the corner of Chapel and High streets, Windsor.

I AM WEARING  a Yea.Nice beanie from Fast Times, a skate shop on Swanston Street, which is fresh. This is a random Levi’s denim jacket that my friend just gave to me, and this is a cheap-as black turtleneck that I got from one of those warehouses where they get all the stock that no one wants. The warehouse was in Tassie, which is where I’m from. I literally found this chain on the floor somewhere. I’m not really sure where, I think at a pub. I was given both pairs of shoes by two different friends, but I just kind of mix them together. They’re both Nike Air Max 95s. No idea where they were purchased but probably Hype DC. I just had to buy my friend a cup of coffee, and then he gave me the blue ones. I think the silver ones were a birthday present. The belt is from Savers and the pants are from one of those vintage shops on Swanston Street, I think Vintage Sole. My socks are also from Fast Times. They have "Bowie" written on them. My mum gave me this pink watch. It’s a fake Casio G-Shock. I’m pretty sure both earrings are from Target. One is a star and moon, and the other is an eye. My bag is from a two-dollar shop and my sunglasses are from Cotton On.

MY STYLE IS I have no idea. I just try and dress in s— that I have not seen on other people.

I ADMIRE THE STYLE OF Smino, the rapper. He’s got a fresh style. He wears like bright yellow puffer jackets and s— like that.

MY FAVOURITE PLACES TO SHOP Fast Times is tight. I like Savers as well. Dakota501 down the road has steezy-as (effortlessly stylish) clothes there. I actually go to Cotton On all the time to buy sunglasses because they look like they could be a really expensive pair but they’re only $10. I usually break them or lose them within a few weeks.

WHEN I WAS A KID I WORE I swear there are pictures of me when I’m five and I’m wearing steezy corduroy pants and a yellow turtleneck. I like to think I always rocked that but I don’t think I did. I used to wear full skater outfits, so really baggy stuff and trashy, ripped-up clothes.

I WOULD NEVER BE CAUGHT DEAD IN

04/05/2019 Fashion Comments Off on Street Seen: my style is hard to define but unique
Lifestyle