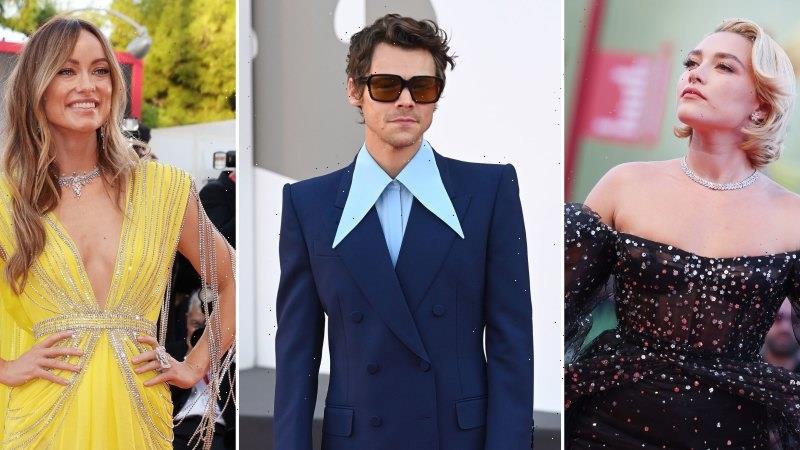 If you don’t have anything nice to say about someone, let Gucci and Valentino do the talking. That is the approach of director Olivia Wilde and actors Harry Styles and Florence Pugh at the Venice Film Festival premiere of Don’t Worry My Darling.

Wilde and Pugh are currently pitted against each other in a public feud to rival Joan Crawford and Bette Davis, Kate and Meghan, and Britney Spears and her entire family. Poor Harry Styles is caught on the sidelines as Wilde’s partner, Pugh’s co-star and Mick Jagger’s successor, wearing a goofy grin, impossibly sharp suits with peaked shoulders and shirt collars that won’t quit. 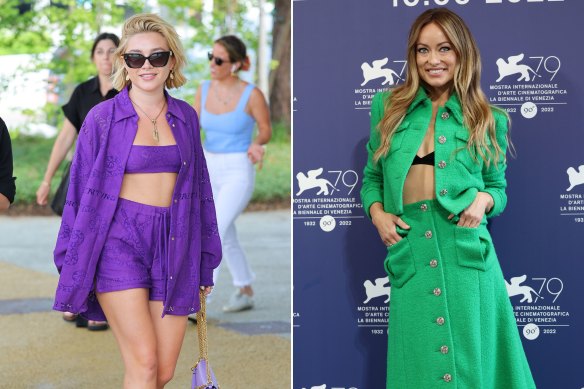 Without the aid of a whiteboard and a social media savant, the complexity of the feud is as difficult to unravel as a Paco Rabanne chain mail dress, but involves a leaked video of Wilde referring to Pugh as “Miss Flo” and questioning the actor’s commitment to the highly stylised dystopian movie.

When asked about the alleged discord at the film’s press conference, Wilde in the Bottega green corner, wearing a Chanel skirt suit with a black bralette, tried to dampen the flames. “As for all the endless tabloid gossip and all the noise out there, I mean, the internet feeds itself,” Wilde said. “I don’t feel the need to contribute. It’s sufficiently well-nourished.”

Pugh’s response? Silence. The Black Widow and Midsommar star had skipped the press conference, preferring to cruise into Venice before the film’s premiere in a printed purple Valentino knit shirt and short combination with matching bandeau top, accessorised with a nose ring.

Fashion referees would be hard-pressed to call a winner between the ensembles for this teaser to the main event. Purple is more current than green on the colour trend wheel but Chanel haute couture trumps Valentino resort. The decider was left to the red carpet.

Before the screening Wilde matched Style’s impeccable blue Gucci jacket with woollen flared trousers, in a custom Big Bird yellow chiffon Gucci gown with a plunging neckline, diamanté details and floral organza hem. Wilde and Styles are long-term fans of creative director Alessandro Michele’s seventies redux approach to fashion, championed since moving into the top role at the house of Gucci in 2015. 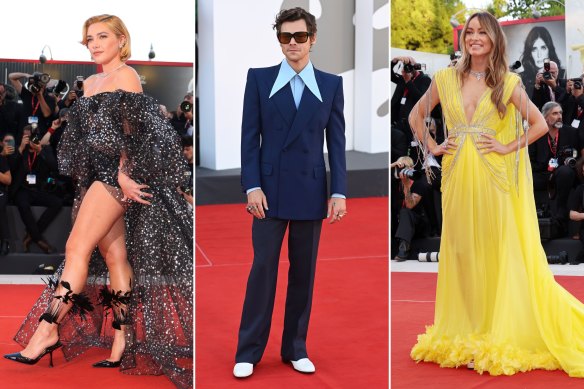 The verdict arrived from Pugh’s stylist Rebecca Corbin-Murray, who has worked with Emma Watson and Lily James. Posting to her Instagram account, Corbin-Murray captioned an image of Pugh on the red carpet: “Miss Flo”. Just like Gucci’s ‘Guccy’ collection of 2017, the power move of Pugh’s team reclaimed a slur, making it part of their own brand.

Wilde’s stylist Karla Welch’s countered with the caption “There’s more to the story” on her Instagram page. When placed against the enthusiastic response of co-star Chris Pine in a Ralph Lauren tuxedo to Pugh’s sartorial second serve, the post fell flat. Star Trek’s Pine photographed Pugh with a disposal camera, too cool to take part in social media snaps.

Pugh is seemingly the winner here, but the real heavyweight champions are Valentino and Gucci.

In the 90s, the Giorgio Armani camp, with Michelle Pfeiffer, Julia Roberts and Jodie Foster in minimalist uniforms, was pitted against Gianni Versace’s flashy designs, on the likes of Liz Hurley, Madonna and Courtney Love. The rivalry kept both labels in the headlines, swapping places at the top of the fashion ladder until the death of Gianni Versace in 1997, and propelling them to multi-million dollar empires.

The fashion feud continued into the noughties, with Armani telling The Sunday Times Magazine in 2005 that his rival had once said to him, “I dress sluts. You dress church ladies.”

Valentino’s creative director Pierpaolo Piccioli and Gucci’s Michele are far more civilised, having sat side by side in the front row at rivals’ shows and both serving in the accessories trenches at Fendi under Karl Lagerfeld, before finding solo fame.

With Gucci, owned by the Kering conglomerate and valued at $US37.9 billion ($55.6 million) by brand analysts Kantar and Valentino, owned by Qatari investment fund Mayhoola, valued at $726 million, they are clever enough to sit further back than Styles and watch sales soar.

06/09/2022 Fashion Comments Off on The Battle of Venice: Harry Styles, Florence Pugh and Olivia Wilde fight with fashion
Lifestyle