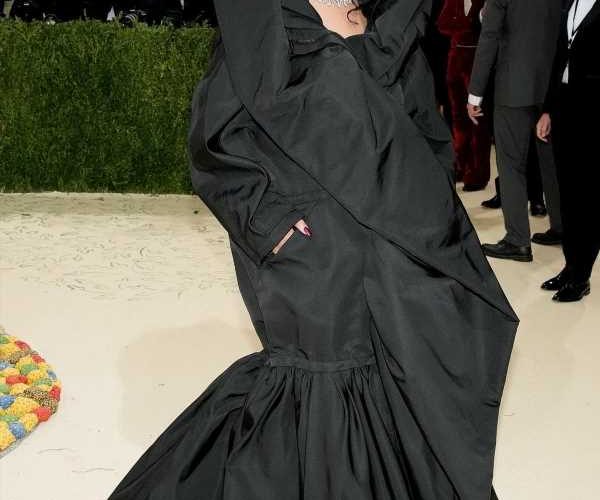 The first in-person Met Gala since 2019 is officially underway—and two years of being cooped up at home has clearly provided celebrities plenty of time to mull over the most fanciful, whimsical, and exciting fashion creations they’d like to wear once red carpets open up again. And open up they have, in spectacular manner. Just one day after IRL New York Fashion Week, the Costume Institute Gala has rolled its own carpet out for stars including Billie Eilish (who channeled “Holiday Barbie,” and Marilyn Monroe with her sparkling ball gown and voluminous blonde hairdo), Lil Nas X (whose multilayered disrobing called to mind Lady Gaga at “Camp” in 2019), and Timothée Chalamet. Most are decked out according to the theme, “In America: A Lexicon Of Fashion,” while others have worn a loose interpretation of that motif. But isn’t the Met Gala all about bringing your own take to the table, anyway? However the stars like Naomi Osaka (who brought together her Haitian and Japanese heritage with a can’t-miss hair look) and Saweetie (whose rose, gold, white, and blue train had to be adjusted by not one but two attendants) chose to pay homage, these are our favorite looks from the 2021 Met Gala.

W magazine’s Pop Issue cover star knows how to work a column silhouette—it’s one of her go-to styles on any red carpet. Garner has amped up the fashion quotient with a cutout bodysuit underneath, along with her natural curls worn short and glittering eye makeup.

It’s rare to see Gerber in a ballgown—but for this year’s Met, the model wanted to try something new. Working with Oscar de la Renta designers Fernando Garcia and Laura Kim, Gerber drew inspiration from Bianca Jagger in Halston at the 1981 Met Gala.

Leave it to Lorde to make an ethereal statement. The musician wore the brand highly favored by lower Manhattan residents in a way we’ve never seen before—decked out in delicate beads and complete with an elegant crown.

Good 4 u, Olivia. The starlet ups the chic quotient in this feathered number, while staying true to her age.

Kravitz will never lose in a statement-making, slinky dress.

An icon has entered the chat. Who else could pull off this spectacular feathered look by 26-year-old British-American designer Harris Reed, who is known for his gender fluid wears?

Coel brings the bodysuit to the next level with this Nicolas Ghesquière look.

Green baby (whose name is apparently Cody) aside, we respect Frank Ocean’s commitment to Miuccia Prada.