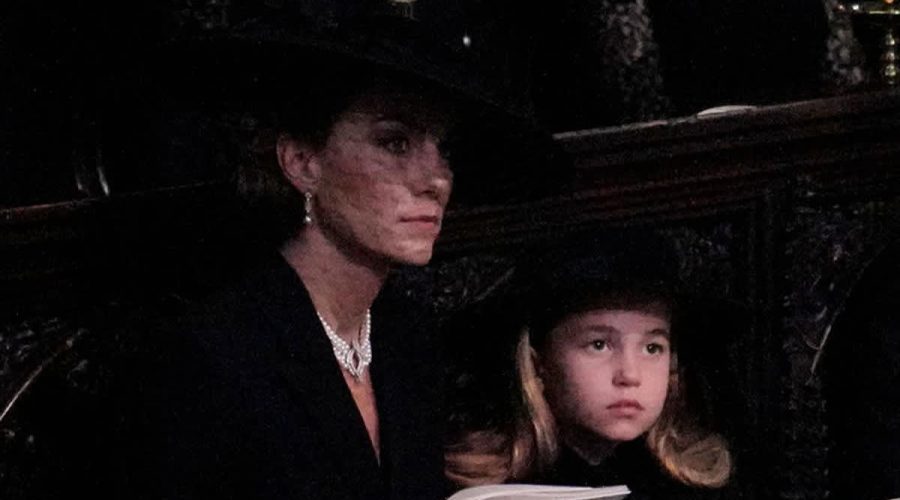 We don’t know about you, but we are still reeling from Queen Elizabeth II‘s state funeral which took place on Monday 19th September at Westminster Abbey.

Seeing the royal family show their respect to the monarch was incredibly moving, and one of the things that struck us was how some family members subtly paid tribute to Her Majesty with their carefully chosen outfits.

The Princess of Wales and her daughter, Princess Charlotte, did just that through their sentimental jewellery. Kate, 40, wore a stunning coat dress by one of her favourite designers, Alexander McQueen and added an array of the Queen’s much-loved pearls.

The Princess wore a four-strand diamond-and-pearl choker, which she has been spotted in several times before, most notably at Prince Philip’s funeral last year. She also wore the same pair of Bahrain pearl drop earrings from the late monarch.

Kate and Charlotte both wore jewellery connected to the Queen

The bracelet, however, appears to be a new addition to Kate’s jewellery collection. It could quite easily be mistaken for the three-strand pearl bracelet she’s worn of Princess Diana’s, but this four-strand bracelet has a different clasp and is believed to be one of the Queen’s. Her Majesty was pictured wearing it while celebrating former Prime Minister Margaret Thatcher’s 70th birthday in 1995.

Princess Charlotte also wore something special that had a deep connection to the Queen. Dressed in an all-black ensemble by Ancar, the young royal had a stunning diamond brooch in the shape of a horseshoe pinned to her left lapel.

The small accessory, which is Charlotte’s first piece of significant jewellery she has worn in public, appeared to be a gentle nod to her ‘Gan Gan’ who adored horses so it was particularly poignant, as the late monarch was known for her passion for both horses and horse racing and had her first riding lesson at the age of three.