There are so many ways to define "Australian fashion". There's the unmistakable ruffle and whimsy of a Zimmermann frock, the bold hues of a Camilla caftan, or Aje's minimalist take on Australiana. Then there's the stuff people actually buy.

The results are in, and we're officially a nation of T-shirt and jeans loving shoppers. And we're obsessed with sneakers. 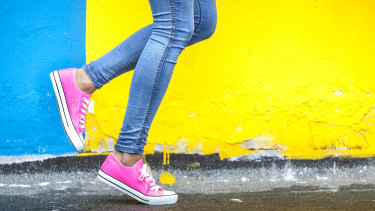 Jeans and sneakers were among the top sellers online in 2019.Credit:IStock

Online retailer The Iconic has released its Year in Fashion report, which tallies the top sellers for the year, as well as in various categories, including sportswear, gender and clothing with sustainable credentials.

The report also confirms we are a nation of online browsers, with more than 4.3 million hours – equivalent to 500 years – clocked up on its platform alone over the past 12 months.

Topping the list of most-popular items was the Superga 2750 Cotu Classic sneaker, its popularity no doubt boosted by its unisex status, under-$100 price tag, and also being white in colour. After all, US Vogue editor Anna Wintour did say in January that sneakers would remain the fashion item of 2019.

Five other spots in the top 10 were also taken out by footwear, with popular brands including Vans, Converse and Birkenstock. The rest of the top 10 included jeans and T-shirts, with Topshop's $85 Jamie jeans the top-selling denim item.

And in the first year of a dedicated sustainable fashion section on its site called Considered, which tags products with credentials ranging from ethical sourcing to vegan fabrics, top brands included cult sneaker label Veja and Melbourne-made Nobody Denim.

The Iconic's head of womenswear, Anna Brennan, said the top-10 sellers were "very reflective of … the 25-35 [year-old] youth customer".

She said the typical female customer was looking to take fashion risks. "We have had great cut-through with organza, colours, cut-outs and tailoring has become fashion, not just work wear. And she loves linen – and we don't see it going anywhere."

"The average 'basket value' and the ASP [average selling price] is higher in Considered. We feel we have led the market by launching this," she said.

The results of the report also indicate that consumers are developing more confidence to buy categories they would have previously shopped at a physical store, such as swimwear and denim. Ms Brennan said the company had invested in better photography and video, to "better inform the customer so by the time they transact there are less returns because there is an environmental consideration there, too".

Also this week, global fashion search platform Lyst released its Decade in Fashion report, which highlighted major trends from each of the past 10 years.

The report, which was based on articles, search and sales data as well as social media mentions, found the hottest brand of 2019 was Bottega Veneta. Other major trends of the decade include slogan tees, ugly sneakers and natural brows, which was linked to a fall in searches for tweezers in 2013 after model Cara Delevingne sported fuller, bushy arches.

Related posts:
17/12/2019 Fashion Comments Off on The results are in: We’re a nation of jeans and sneaker wearers
Lifestyle