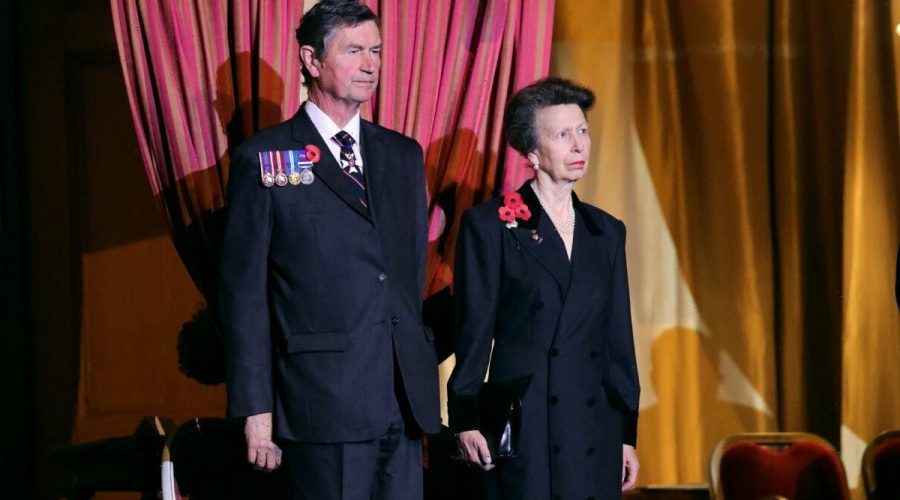 Princess Anne, 72, stepped out with her husband Timothy Laurence at the Festival of Remembrance on Saturday. She wore an incredibly smart black coat for the occasion as she sat behind King Charles and Queen Camilla.

The Princess Royal wore a three-strand pearl necklace and some simple pearl earrings.

Pearls are traditional jewels for the Royal Family to wear.

He said: “Pearls have traditionally been connected to mourning, ever since Queen Victoria wore only black and pearls after the death of her husband.”

The 72-year-old Princess accessorised with two brooches on Saturday, as well as three poppies.

One brooch was a sparkly gold and silver brooch that appeared to be in the shape of a bow.

The second brooch worn by Princess Anne was navy blue and featured the Imperial State Crown, a clear nod to the Royal Family.

Princess Anne’s coat reached her knees, and she paired this with sheer tights and some black kitten heels.

However, it was her eye-catching choice of three poppies that caught royal fans’ eyes.

Princess Anne wore these poppies as a mark of respect to those who died during the First World War and other conflicts.

The reason royal women, who also include Queen Camilla and Kate, the Princess of Wales, wear multiple poppies has never been confirmed by the palace.

One theory is that they wear multiple brooches in honour of family members who have fought and died in wars.

Kate’s great-grandmother had three brothers who were killed in action during the First World War, so the theory stands up.

While Buckingham Palace never confirmed the reason for the monarch’s preference, it is thought that Her Late Majesty’s five poppies represented each service in the war: the Army, the Navy, the RAF, the Civil Defence and women.

Princess Anne’s brother King Charles and his wife the Queen Consort led the working royals at the Festival.

The Prince and Princess of Wales, the Earl and Countess of Wessex, as well as the Duke and Duchess of Gloucester, and the Duke of Kent and Princess Alexandra were also in attendance.

Through words, song, and storytelling, the Festival celebrates the qualities behind service which make it an essential part of life in the Armed Forces and civil society.