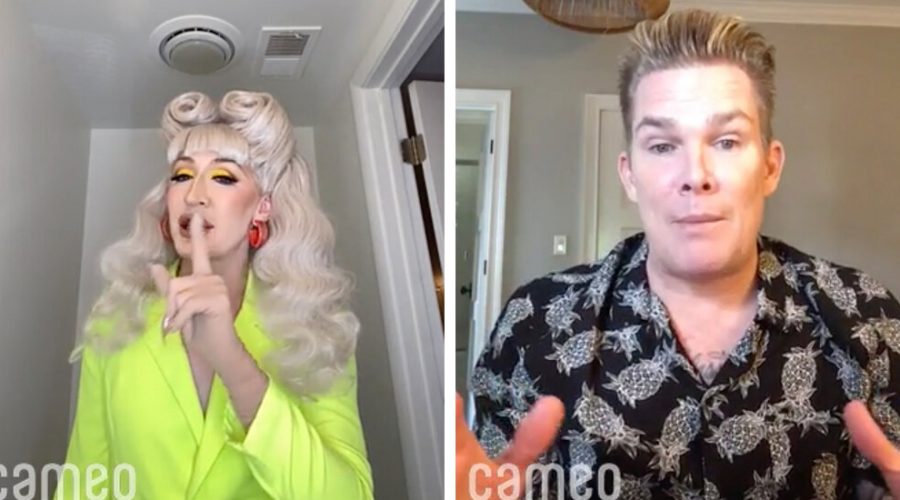 It all started as a prank.

In early 2019, Caldwell Tidicue, a comedian and a former contestant on “RuPaul’s Drag Race” known as Bob the Drag Queen, was at his home in New York City when he was tickled by an idea: “Wouldn’t it be funny,” he thought, “if someone broke up on Cameo, and I went and delivered the news?”

On a whim, Mr. Tidicue went down to his basement and filmed himself mournfully playing the piano in full drag. “What I’m about to tell you is a little bit uncomfortable,” he warns someone named Quentin. “However, Rafael feels like your relationship is not working out. And this is not a joke. This is very serious.”

Mr. Tidicue then asked his creative partner, Mitch Ferrino, to post the video on Reddit, and his Drag Race colleague, Monét X Change, shared the video on Twitter. Soon, the internet was ablaze. Messages of admiration rolled in, while Rafael was scolded for his insensitivity. “If my marriage fails, I’ll know who to call,” wrote one fan on Twitter.

Of course, neither Quentin nor Rafael existed — both the couple and the video were fake. Mr. Tidicue had only constructed it to look like a real Cameo video using techniques he had learned as one of the site’s celebrities.

Cameo, a service that allows fans to pay celebrities between $1 and $2,500 (the average price is around $60) to send them video messages, was started in 2017 by Martin Blencowe, Devon Townsend and Steven Galanis as a way to connect directly with international luminaries. Through the app, the general public can request shout-outs from entertainers like Bob, as well as athletes, musicians, actors, or public figures. Once that celebrity accepts the request, a personalized video arrives in the recipient’s inbox, typically with kind words about a birthday, a promotion, or a new marriage.

Bob’s viral breakup video inspired a raft of imitators using the service to make their own breakup and even divorce Cameos.

Last spring, Luke Geddes, the author of the novel “Heart of Junk,” impersonated his own father in order to commission an emotional Cameo from Richard Karn, a star of the 1990s TV sitcom “Home Improvement.” In the shout-out, the actor congratulates Mr. Geddes on the novel’s release before announcing, sympathetically, that his parents were getting a divorce.

Mr. Karn was not made aware that the video was a prank. (Mr. Geddes’s parents are not divorcing.) Mr. Geddes said that he “played it totally straight” when sending the request, and that he was “definitely surprised” when Mr. Karn responded with a melancholy and earnest divorce announcement. “He just went for it like a true Cameo pro,” Mr. Geddes said. “He did everything I asked for, and more.”

Mr. McGrath’s breakup video became a viral sensation, making national news and inspiring a legion of new Cameo bookings for the singer. ((Brandon Kazimer, a representative for Cameo, calls it “among the most viral Cameos ever.”) The revelation that he, Mr. Scaramucci, and Mr. Sandoval were the subjects of a simultaneous prank campaign barely registered with the general public.

According to Mr. Galanis, Cameo’s chief executive, the video was so widely shared that the platform changed as a whole. “Anytime we have those viral moments, it drives awareness,” he said.

The service has been pushed into unexpected places during the pandemic, Mr. Galanis said. With physical connections limited and a growing roster of celebrities available on the platform, new users have begun turning to Cameo for reasons altogether more serious: their real breakups and divorces.

Mr. McGrath estimates that he has announced 15 breakups since the original viral video, many of them during the coronavirus health crisis.

But while he says that he’s not afraid to deliver bad news to people’s inboxes — “We want Jim to know he’s fired!” — Mr. McGrath flatly refuses to become the face of “breakup Cameo.”

“In a million years, I would not accept that role,” he said. “I’m doing these Cameos for fun! I wouldn’t want to hurt anybody’s feelings.”

Another “Drag Race” star with an unprintable surname, Detox, experienced the same dilemma when a user identified only as Adam recently asked her to announce to his wife that, after 13 years together, he had finally signed their divorce papers. After communicating with Adam, Detox agreed to make the Cameo, but nearly burst out crying while recording it. She says that while she had received “some pretty sweet requests” before, Adam’s was especially moving amid “this very unusual circumstance we’re all facing.”

“There was something heartbreaking but also very hopeful and sweet in that particular request,” she said. “We need more compassion.”

Aaron Kleinman, the director of research and give smart at the political advocacy group Future Now Fund, turned to Jimmy King, a retired professional basketball player, when he needed a similar video earlier this year. “Cameo is the only good tech company,” Mr. Kleinman tweeted in August, “as it’s the only way I can get a member of the Fab Five to congratulate my friend on his divorce.”

For Mr. King, Kleinman’s request was deeply personal. “I’m a divorcée myself, my brother. I know how difficult it can be,” he said in the Cameo video. “Welcome to the divorced club!”

Unlike Mr. Kleinman or Mr. McGrath, many of the celebrities who joined Cameo during the pandemic are far less reluctant to offer their services for separations.

When Matthew Perry, a star of the TV series “Friends,” signed onto the service in October, he declared his excitement to leave “divorce messages — any kind of messages you guys want.” Likewise, J-L Cauvin, an acclaimed impressionist known for making Cameos in character as Donald Trump, said in an email that he’s “still hoping for a divorce before February,” when Joe Biden will become president. And new additions to the celebrity roster, such as the comedians Daniel Franzese and Ben Brainard, and the drag queen Scarlet Envy, have all expressed their unabashed willingness to initiate divorce proceedings.

Mr. Galanis, who helped start Cameo, said that he never anticipated this particular use for the service. “As a founder, you have an idea of what you want this to be,” he said. But he is quick to clarify that the talent on the platform (which Cameo handpicks to invite) all share one mutual goal: to “make magical moments.”

The divorce and breakup category is a natural extension of this goal, Mr. Galanis said. “The talent wouldn’t do the videos if they felt like they were causing harm,” he said.

Mr. Galanis said that users often express gratitude for the opportunity to share one last highly personal experience of joy, nostalgia, and fandom with their exes. If not for that, he said, the bookings would stop. “I don’t think — at any type of scale — that Cameo has a reputation of being a place of hate, or for putting people down. Frankly, I think if you saw that, then you’d see talent leaving the platform.”

12/01/2021 Fashion Comments Off on Want a Divorce? Try Cameo to Break the News
Lifestyle