When the mood strikes, Gregory Thomas Moss and Danielle Cristina Black might make up new words to a song, riff on a word or two from one they already know, or pick up on each other’s jokes, perhaps while cooking in their kitchen in Boerum Hill, Brooklyn.

“We’re a comedy team at our kitchen table, Ms. Black said. “We built this meta-referential humor, an allusion to things we have laughed at, our inside jokes.”

Mr. Moss had a feeling they shared an offbeat sense of humor in August 2017 when he noticed Ms. Black mentioned “Bojack Horseman,” an animated series on Netflix, as one of her favorite shows, on her OkCupid profile; one of his favorites too. The photos she posted also did not escape him.

“She had her arms extended and looked so happy and so full of life and joy,” said Mr. Moss, 36, who is a writer and composer for musical theater. He graduated from Sarah Lawrence College and received an M.F.A. in musical theater writing from N.Y.U. He wrote the book, music and lyrics with Casey O’Neil of “The Great Cat Massacre,” a musical comedy that ran February to April 2019 at St. Luke’s Theater in Manhattan.

“We had a good rapport in the written word,” said Ms. Black, also 36, and a content director in Manhattan specializing in strategy and editorial development for the marketing practice of Accenture, the Dublin-based professional service company. She graduated from Johns Hopkins University.

After he mentioned his trip to Machu Picchu in Peru, and ritual sacrifice, their humor took off, and so did their connection, with their own private “advice column” that they wrote for each other and called “Dear Stabby.” “I come from an improv theater background,” he said. “It’s known as playing the game.” 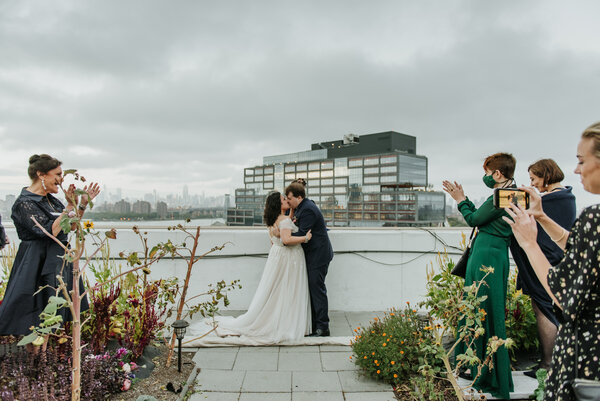 They finally met Sept. 29 at the Topaz, a bar near where she then lived in East Williamsburg, Brooklyn.

“She was as beautiful as in her profile,” Mr. Moss said, “and very funny too.” They shared a good night kiss before he headed into the Montrose Avenue subway station to catch a train home to Manhattan. “I talked to her the next day, and every day since.”

They laughed on their date the next week at a comedy club near Union Square, where he impressed her by asking if she wanted to leave when a comedian got carried away with one too many misogynistic jokes. They stayed on, and then headed to an East Village bar, where they were until around 3 a.m.

“He was good at listening and good at returning the serve,” she said.

Before the pandemic they both loved going to the movies. In December 2017 while watching “Battle of the Sexes” at Nighthawk, a movie-dinner venue in Williamsburg, he surreptitiously slipped her a note on a food and drink order, which said: “Hi, beautiful.” He surprised her when he slipped her the same message there a year later. (She saved both notes.)

He proposed on Sept. 29, 2019, two years after they met, in a wooded area at Storm King Art Center in Orange County, N.Y.

“What I love most about Greg is his Gregitude,” she said, “his unique point of view, sense of humor and gentle nature.”

They planned a December 2020 wedding, with about 200 guests, at Sound River Studios in Long Island City, Queens, but in July, with no end to the coronavirus pandemic in sight, that changed. On Sept. 26, Christine E. Schrader, a friend of the couple who became a Universal Life minister for the occasion, officiated on the rooftop of the Brooklyn Grange, before 20 guests, to whom they read a couple of their “Dear Stabby” columns before exchanging heartfelt vows.

As they walked back up the aisle, Mr. Moss stopped at the end of it, and passed her a note. It said: “Hi, beautiful (wife).”

“It took her a second to realize, to see what it was,” he said.

She said she tried not to cry. “It was a swell of love. It was a perfect encapsulation of Greg. It was sweet and thoughtful.”

Later that night, the note joined the two previous ones he gave her on their refrigerator.