NO matter how much you profess to trust your partner, there's nothing quite like a stag do to send your mind into overdrive. Right?

But while most people subtly try to keep tabs on their partner throughout their wild night out with the groom, one woman has gone to all new extremes to control her husband's behaviour on an upcoming stag. 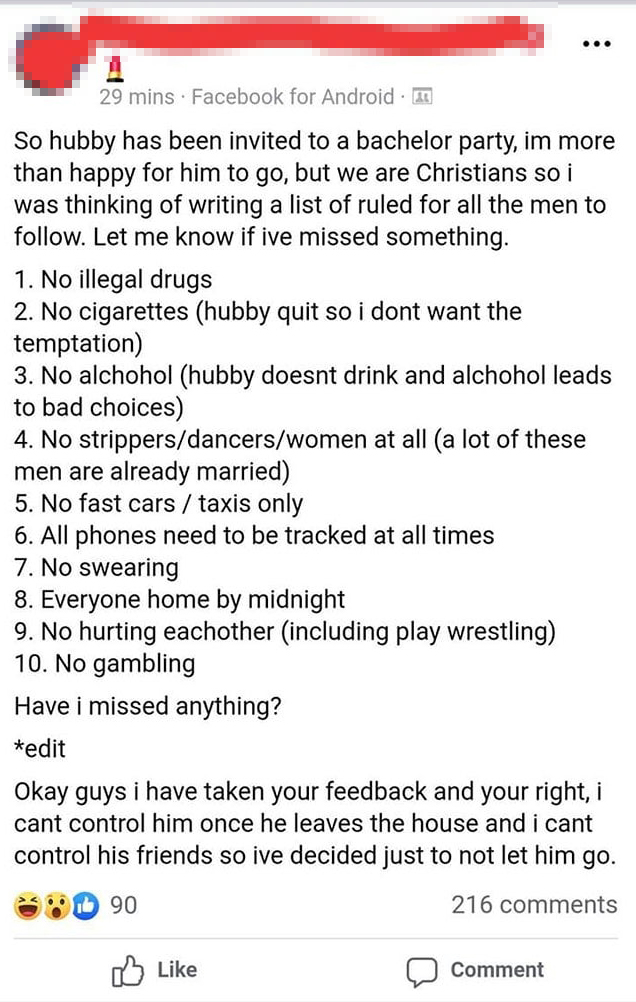 Asking her Facebook friends for advice, the woman insisted that she was "more than happy for him to go" but had written a list of 10 rules he must follow.

Although the wife's rules consisted of some perfectly reasonable suggestions – including "no illegal drugs" or gambling – she then BANNED her husband from engaging in some key stag do activities.

She added: "No alcohol – hubby doesn't drink and alcohol leads to bad decisions.

"No strippers/dancers/women AT ALL – a lot of these men are already married." 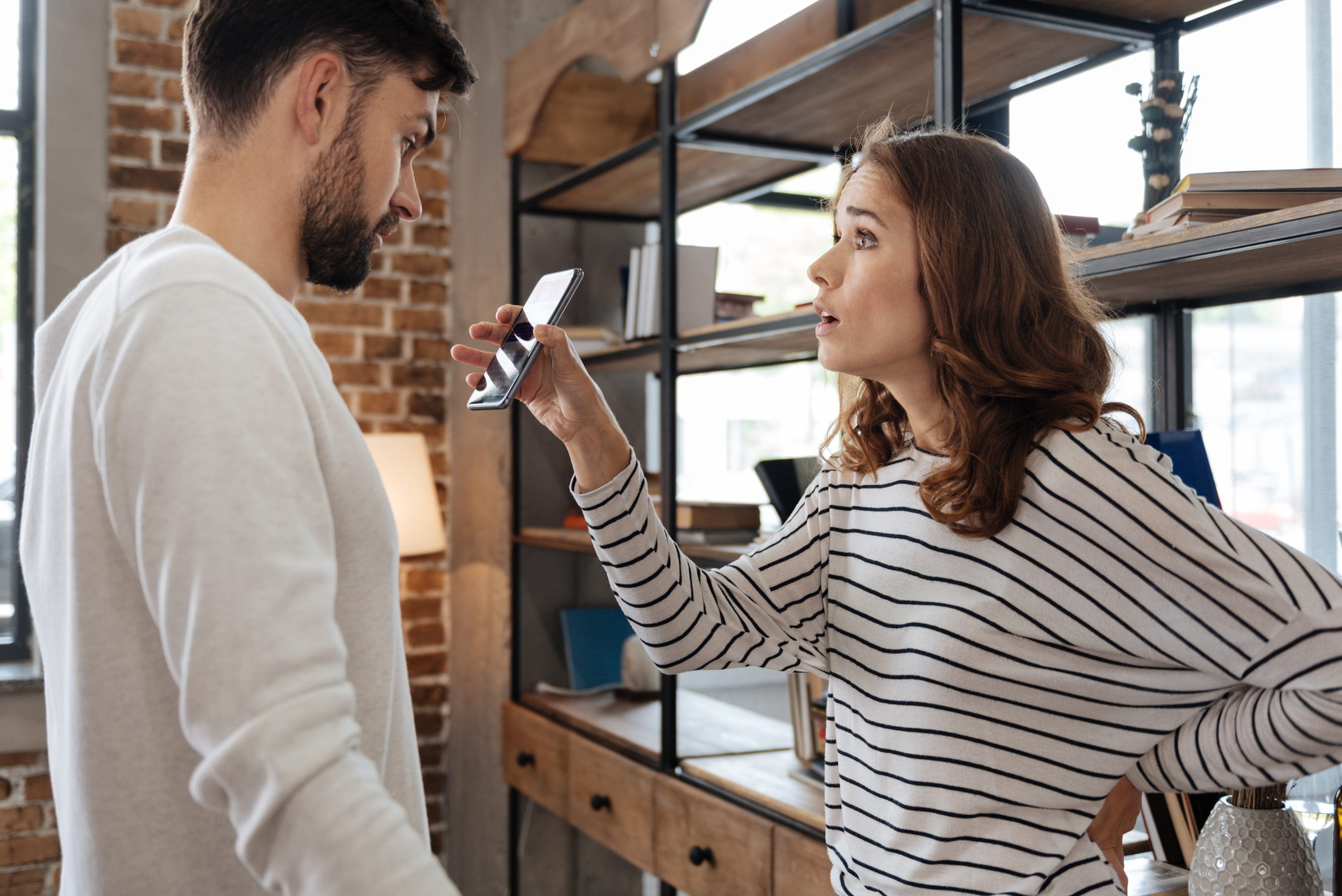 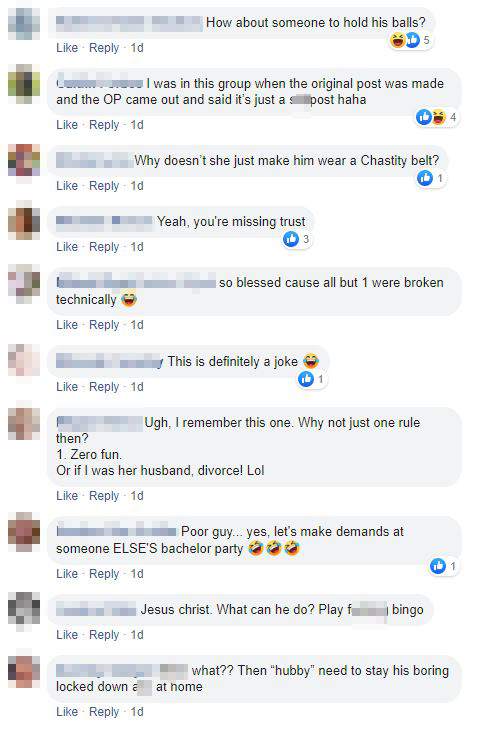 Additionally, the wife says that everyone who is attending the stag must have their "phones tracked at all times" and should "be home by midnight".

Not to mention the fact that the men are also told that they're not allowed to swear in front of each other or engage in "play fighting".

But in an even more hilarious turn of events, the woman changed her mind completely after listening to her Facebook friends.

Average cost of attending a stag do or hen party:

A new survey by MyVoucherCodes has found that the average cost of attending a stag do or a hen party is £204.82

Here's how that figure breaks down:

Unsurprisingly, the woman's bizarre post was then shared on Reddit – where users were quick to express sympathy for "her poor husband".

One wrote: "I'm trying to imagine one of my friends pulling out this list at a bachelor party and telling us that these are the rules his wife had set out for us.

"The verbal obliteration they would get would be legendary." 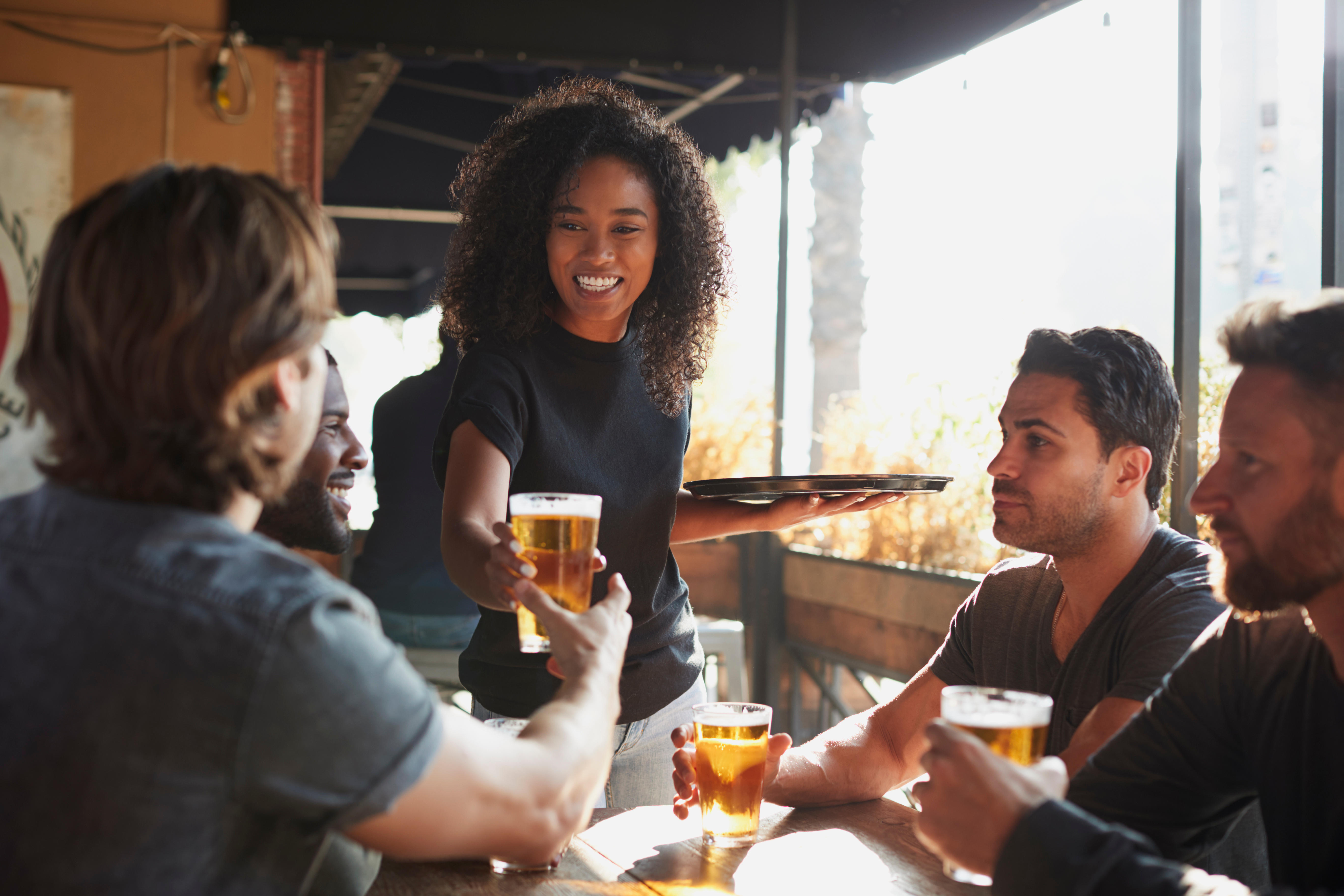 Another added: "That would make me want to exclude even my best friend from my bachelor party.

Poking fun at the woman's "perfect logic" at the end, another wrote: "Can't control him so I'm going to control him."

Others were so surprised at the requirements that they felt they slammed the list as being fake.

For more wedding horror stories, this bride-to-be has been mocked for her black engagement ring which is inspired by her dead pet snake.

And this couple have been slammed for throwing a huge wedding for 300 people – and asking guests to pay off their student loans as a present.

Plus a "spoilt brat" bride has been slammed for admitting she "hates" her cheap engagement ring.

Related posts:
12/12/2019 Fashion Comments Off on Wife issues husband with VERY strict set of rules for his mate’s stag do… including no booze & all phones to be tracked
Lifestyle