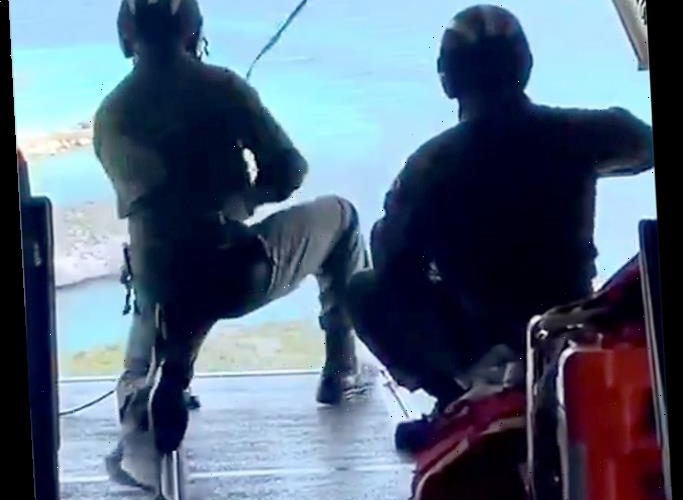 Three people were rescued by the U.S. Coast Guard on Tuesday after being stranded on an uninhabited island in the Bahamas for 33 days.

According to the Coast Guard's Southeast Twitter account, three Cuban nationals — two men and one woman — were found stranded on Anguilla Cay. The trio was spotted on Monday waving a "makeshift flag" by one of the Coast Guard's aircraft while it was on a routine patrol.

"The [pilot] noticed some unusual flags down there, some different colors, so they noticed some orange. They went back around to check it out, and they noticed three people signaling them," Coast Guard Lt. Justin Dougherty told NBC 12.

The crew then dropped food, water and radio to the trio for sustenance while they waited for the Coast Guard helicopter rescue team to deploy to the scene.

Due to weather conditions, the recovery was delayed until Tuesday. However, Coast Guard officials were able to communicate with the stranded group through the radio.

Authorities learned that the group had became stranded after their boat capsized. All three swam to the island and survived on coconuts and the meat from conch shells and rats. After finally being airlifted from the island on Tuesday, all three were transferred to Lower Keys Medical Center in Stock Island, Florida with no reported injuries.

"They were very, very clear and articulate about what was going on, so I was amazed they were in as good a shape as they were," Dougherty told NBC. "It was incredible. I don't know how they did it. I'm amazed that they were in such good shape when we saw them," he added, as the island lacked any source of fresh water.

"Thanks to our aircrews diligently conducting routine patrols, we were able to spot people in distress and intervene," Connett said. "This was a very complex operation involving assets and crews from different units, but thanks to good communication and coordination between command centers and pilots, we were able to safely get everyone to a medical facility before the situation could worsen."