The ABC has cut 229 jobs from across its divisions as part of its recent round of redundancies and cost-saving measures.

Managing director David Anderson confirmed the job losses figure in a Senate estimates hearing on Wednesday – lower than the anticipated 250 job losses he foreshadowed in June when he announced significant restructuring as part of a new five-year plan. 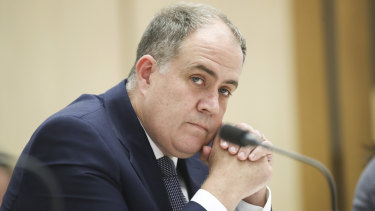 Mr Anderson attributed the job cuts to a three-year funding freeze which took effect in July 2019, as well as the cumulative effect of previous budget cuts.

He said there would be no net losses to jobs in regional and rural Australia, which he defined as "outside of capital cities".

In June, Mr Anderson announced a series of cost-cutting measures, including up to 250 job cuts, in order for the ABC to achieve $84 million in savings as a result of the funding freeze. Other measures included axing the 81-year-old flagship 7.45am radio news bulletin, imposing a 25 per cent cut to its travel budget and exploring options to lease space at the ABC's Sydney headquarters in Ultimo.

The 2020 ABC annual report, released on Tuesday, revealed that separation and redundancies costs had climbed to $35.8 million from $5.6 million the previous year.

Mr Anderson also defended the robustness of ABC's code of conduct policy, as he was questioned about the appropriateness of a tweet by ABC chief political correspondent Laura Tingle last week which accused the government of "ideological bastardy".

In a since-deleted tweet farewelling an ABC colleague, Tingle said: "We grieve the loss of so many of our colleagues to government ideological bastardry. Hope you are feeling smug @ScottMorrisonMP.”

Mr Anderson said Tingle had made an "error of judgement" and he was satisfied no further action needed to be taken.

"Laura Tingle is a veteran of over 30 years of outstanding journalism…I would ask anyone to judge her on the quality of her journalism that is otherwise put out by the agency as opposed to social media," Mr Anderson said.

Mr Anderson said the ABC had recently launched an ABC Code of Conduct that applied to all employees, which operated in addition to existing editorial policies and employment contract conditions.

He said the policy included a requirement for staff "not to mix personal and professional use of social media which brings the agency into disrepute" and not use social media in a way that would impede their ability to be impartial in their reporting.

Asked by Liberal Senator Andrew Bragg whether Tingle's tweet breached the policy, Mr Anderson said: "Had she not taken it down, certainly we would have looked into the matter further," Mr Anderson said.