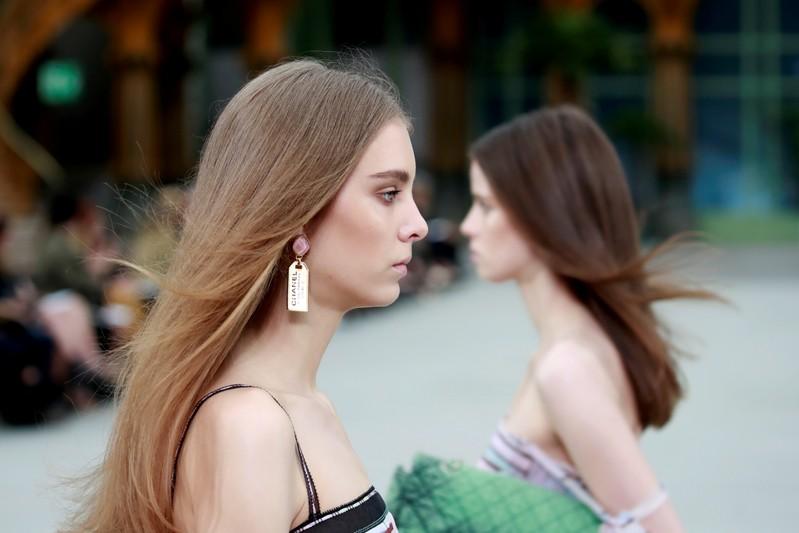 The resort collection 2020 – a range that falls outside the usual fashion week calendar and stays for longer in stores – was unveiled between true-to-life railroad tracks and onlookers ready to embark on the “Chanel Express”.

The glass-domed Grand Palais exhibition hall in Paris was also Lagerfeld’s venue of choice, where the late designer mounted over-the-top catwalk shows ranging from a winter wonderland complete with fake snow to an airport terminal.

For this collection, Viard kept “Kaiser Karl’s” legacy alive in the staging and style, presenting a line full of colors, black-and-white suits and long ruffle dresses down the runway.

Viard, who joined Chanel in 1987 and worked closely with Lagerfeld until his death in February aged 85, presented her own take on Chanel’s famed tweed jackets in vivid pink and pastel lavender, worn with chained gold belts.

Models strutted down the catwalk with a longer version of the Chanel cardigan, tight or wide-legged trousers and two-tone shoes. As a tribute to Lagerfeld, a towering figure at Chanel for more than 35 years, there were rigid white collars on top of light dresses and oversized bows on the chest.

“I think the new designer really did a great job. There was an arsenal of different styles. I like the tweed jackets, it’s very Chanel,” said Christine, a fashion buyer from China.

Viard, who began in embroidery before going on to head Chanel’s creative studio, faces the challenge of retaining the character and style that made the brand under Lagerfeld so distinctive while carving out her own niche.

Unlike her friend and mentor, she has so far shown a preference for discretion rather than the spotlight. On Friday, she briefly waved after the last models came out.

Several sources previously told Reuters Viard’s appointment was transitional and that another successor could yet be announced at the iconic label, originally founded by Gabrielle “Coco” Chanel in 1910.