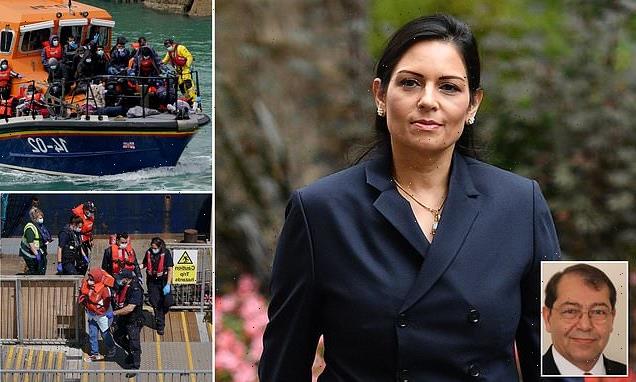 I back Priti Patel’s crackdown on migrants. There’s just one problem – we’ve heard it all before, writes Migration Watch UK chairman ALP MEHMET

So, no more front-page photographs or video footage of miserable migrants — mostly young men — wrapped in blankets, having been rescued from the Channel.

No more people jumping out of the backs of lorries in service station car parks; no more sightings of migrants jogging up Kent beaches.

That is the hope at least after what is being heralded as the biggest shake-up of the asylum system for a generation.

Its prime target are migrants who arrive in Britain illegally via a safe country and the people smugglers who profit from their vile trade in human cargo. 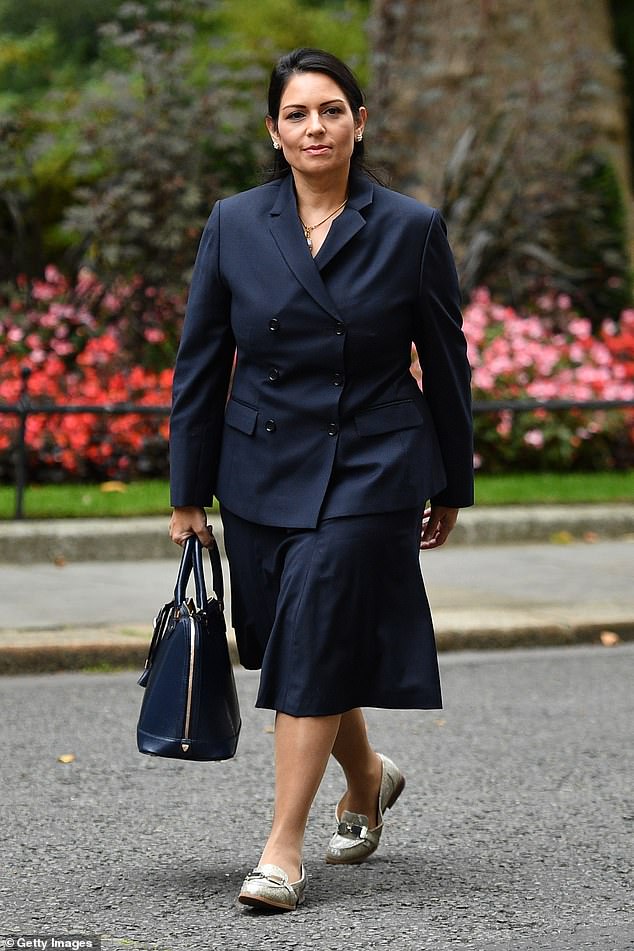 In the Mail this week, the Home Secretary wrote: ‘The way to stop illegal migration is to stop the trade in people and reform the broken asylum system’

In the Mail this week, the Home Secretary wrote: ‘The way to stop illegal migration is to stop the trade in people and reform the broken asylum system.’

There is no doubting Priti Patel’s desire and commitment to deal with illegal immigration. In bringing her Nationality and Borders Bill to Parliament she is, I believe, showing her usual courage.

She has already been lambasted by Labour and various non-governmental organisations and that is as nothing to what is in store.

But however well-intentioned Ms Patel’s proposals are, my biggest reservation is that we have heard it all before.

Remember what Boris Johnson said not two years ago? ‘If you come illegally, you are an illegal migrant and I am afraid the law will treat you as such.’

He told those arriving illegally, ‘we will send you back’.

Yet of the 6,600 who have crossed the Channel illegally this year, not one individual has been sent back. To date we have seen ten times the total of Channel crossers who were reported arriving during the same period in 2019 and nearly 600 times the total from January until June in 2018.

That was the year that the then Home Secretary Sajid Javid declared illegal channel crossings a ‘major incident’ and appointed a gold commander to deal with the crisis. 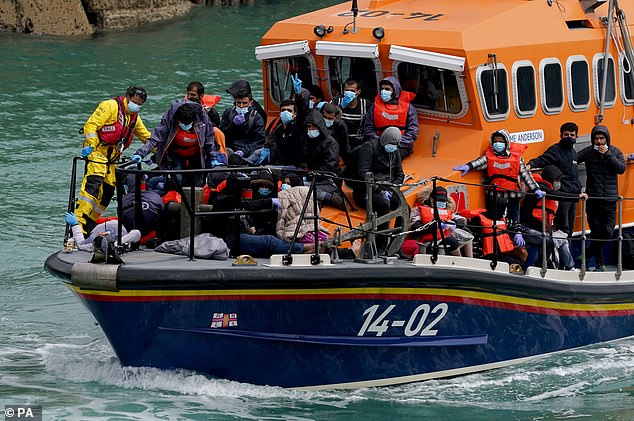 More than 16,500 reported Channel arrivals since 2018  represent just under a third of at least 51,000 illegal immigrants detected in the same period 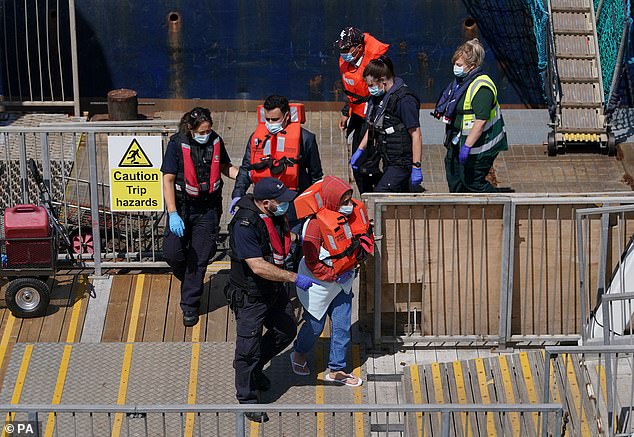 At the current rate of two and half times the number that came in 2020, we are heading for over 20,000 migrants arriving by this route by the end of the year

His successor promised to halve illegal Channel crossings by the end of October 2019 and within six months, illegal crossings were to become an, ‘infrequent phenomenon’.

In the first four days of this month, 600 people arrived. So much for it becoming an infrequent phenomenon.

At the current rate of two and half times the number that came in 2020, we are heading for over 20,000 migrants arriving by this route by the end of the year.

And yet, even these numbers do not tell the whole story.

More than 16,500 reported Channel arrivals since 2018 (the size of a small town) represent just under a third of at least 51,000 illegal immigrants detected in the same period (taking into account those who came by lorry and boat); and that does not include thousands of people who fail to leave the country in line with the rules on visas, work or study permits etc.

So will the new Bill help?

It has a long way to go before it gets onto the statute book and, make no mistake, every effort will be made to neutralise it as it goes through its various legislative stages, including through the hyper-hostile House of Lords. 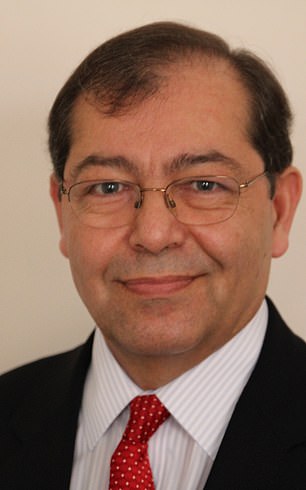 ALP MEHMET: There is no doubting Priti Patel’s desire and commitment to deal with illegal immigration

But if its most eye-catching proposals are deployed they will at least be steps in the right direction. In future, we must, of course, make a clear distinction between genuine asylum seekers and those who come from a safe country and are, in effect, ‘asylum shoppers’.

However, any real progress will require the co-operation of the French authorities in taking migrants back to France. We should be ready to contribute to the extra costs but it would not, I believe, be for an indefinite period as the people smuggling market would collapse once migrants saw that there was no benefit in arriving in Britain only to be sent straight back.

I like the idea of a ‘one-stop shop’ for asylum claims — one chance for an asylum seeker to give all their reasons for seeking asylum so lawyers will not be able to dream up new ones to delay removal and clog up the system. But I do wonder what the courts will have to say about this.

As for offshore processing centres, they are not a new idea. Tony Blair came up with them nearly 20 years ago and was given short shrift by Brussels and his EU colleagues. The location that is being considered by Home Office ministers, in discussion with the Danish government, is Rwanda.

I have nothing against the principle of such centres and sharing the costs involved and running them jointly with a like-minded nation seems sensible. The question is, what will we do with those who are denied asylum?

There are other outstanding questions but I hope this Bill signals a fresh start and the Government at last means business, because tough-sounding talk in the past few years has led nowhere. Promises of firm, decisive action have become synonymous with timidity and indecision.

We were promised control of our borders only to witness the on-going, jaw-dropping chaos in the Channel.

Boris Johnson and Priti Patel have lauded the ‘Australian immigration system’ which since 2013 has made it clear that ‘no one who attempts illegal maritime travel to Australia will be settled here’.

But when it comes to the crunch on asylum and illegal immigration, thus far, they have run scared of the Australian way of doing things. And the much-trumpeted points-based system has turned out to be nothing like the one the Australians have in place.

For more than a year all travel has been substantially reduced by Covid restrictions. However, when more normal conditions return, we will see a major increase in migration for work as six or seven million jobs in our labour market are being opened to world competition at lower salary and skills requirements than in the past and with no cap on numbers.

Ultimately, the Nationality and Borders Act that we end up with must give us the powers to be able to say to those who come here in small boats that they will not be able to stay by simply claiming asylum. If the Bill fails to provide such court-proof powers, the boats will keep coming.

We must do all we can for genuine refugees — no question — and on this we have an excellent record, indeed, better than most. But these illegal crossings are different. They provide a route for bogus asylum claimants and easy money for criminals; they are dangerous; they crowd out the claims of genuine refugees; they are an insult to legal migrants and they are a massive burden on UK taxpayers.

I do hope I am wrong but I sense that we could be having the same debate 12 months from now, when we will also be another year closer to the next election. Conservative Party candidates will find that one of the big questions on the doorstep will be, why has the problem of high and illegal immigration got worse and not better?

Concern about the sheer scale of immigration is very widely felt, so voters will need a convincing answer. That is, no doubt, something that Priti Patel is well aware of. Indeed, her future in politics might well depend on it.

07/07/2021 Lifestyle Comments Off on ALP MEHMET: I back crackdown on migrants but we've heard it all before
Lifestyle