Check out what’s clicking on FoxBusiness.com.

Amazon Inc. said it will give more than 500,000 workers a pay raise, incentivizing more people to join the e-commerce giant, which is looking to fill "tens of thousands" of new positions nationwide.

To try and fill its customer fulfillment, delivery, package sortation and specialty fulfillment teams, Amazon will raise pay by between 50 cents and $3 per hour. The move will cost the company $1 billion in incremental pay for the workers, Amazon executive Darcie Henry said in a Wednesday blog post.

The company pushed up its annual compensation review and promised to roll out raises as soon as mid-May through early June.

However, the company's other teams will hold their annual compensation review throughout the remainder of 2021, according to Henry.

Henry noted that the company already offers an "industry-leading starting wage of at least $15 an hour." By comparison, Jeff Bezos, Amazon's founder and outgoing chief executive who will transition to the role of executive chairman in the third quarter of 2021, pulls in a base salary of $81,840, according to a regulatory filing. However, in 2020, he sold more than $10 billion worth of Amazon shares where according to Forbes estimates, most of his fortune, which sits at about $201 billion. 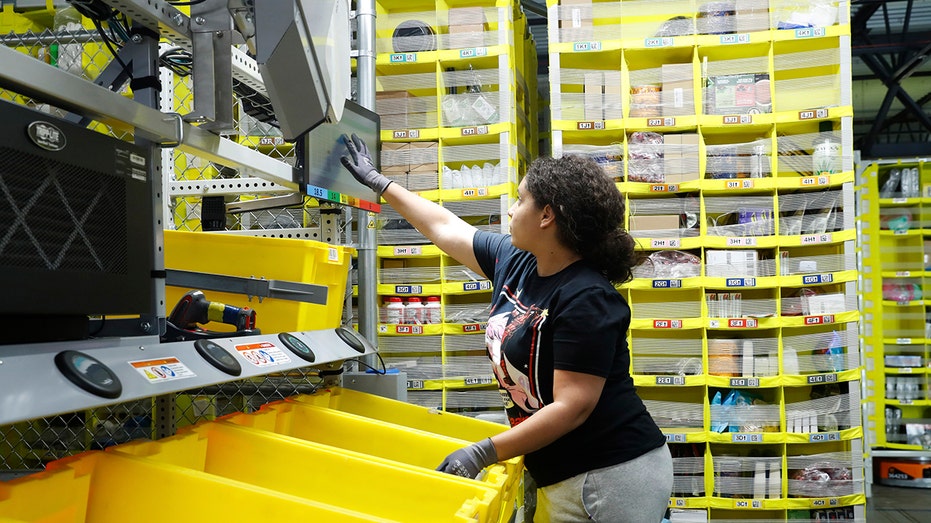 A worker sorts through items and places orders at the Amazon Fulfillment Center in Staten Island, N.Y. in June 2019 (AP/Kathy Willens, File)

The jobs, according to Henry, come with a "range of great benefits, like medical, dental, and vision coverage, parental leave, ways to save for the future, and opportunities for career advancement."

Henry further noted that Amazon provides a "safe and inclusive environment that’s been ranked among the best workplaces in the world."

This comes, however, as the company faces continued backlash from the Retail, Wholesale and Department Store Union (RWDSU), which has accused the e-commerce giant of illegally interfering with a highly anticipated union vote in Bessemer, Alabama.

Although workers overwhelmingly voted against organizing, the retail union filed objections to the National Labor Relations Board asking it to investigate the allegations, schedule a hearing and decide whether to hold a second election or overturn the results.

The union push in Bessemer was the biggest in Amazon’s 26-year history and only the second time one reached a vote. Workers reached out to the union last summer, tired of working 10-hour days on their feet, packing boxes or storing products, without getting enough time to take a break. Mail-in voting started in early February and went on for about 50 days. Organizers promised a union would lead to better working conditions, better pay and more respect.

Amazon, meanwhile, argued that it already offered more than twice the minimum wage in Alabama and provided workers with health care, vision benefits and dental insurance, without paying union dues.

The company made a $2.5 billion investment in additional bonuses and incentives for frontline teams across its entire company in 2020.

29/04/2021 Lifestyle Comments Off on Amazon hiking wages for 500,000 workers amid hiring spree for 'tens of thousands' of jobs
Lifestyle