Never have I got a Mother's Day present right, not once. Mum didn't like the flowers I gave her ("They're lovely Danny! So beautiful! I might just take them outside because chrysanthemums make me sneeze. But they'll look so pretty down near the back fence beside the compost. Thank you!").

She didn't like the chocolates I bought her ("Oh wow Danny! Assorted creams! Unfortunately I'm coeliac and they contain wheat flour, but you can eat them! I'll just sit and watch and eat my rice crackers. Enjoy.").

She didn't like the fancy handbag I picked out for her ("I love it, Danny! It's so stylish! Such a great colour! It's so me! Did you keep the receipt? I LOVE IT!!!!). 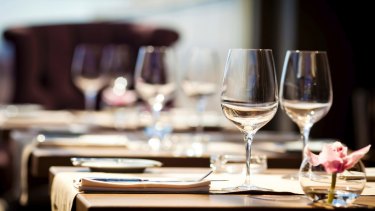 It’s not too late to book a table for Mother’s Day.

So last year I decided to give her the only thing that doesn't make her sneeze, won't aggravate her small intestine and can't be returned to a store – I would give her the gift of ME. This was my Magnificent Mother's Day Masterplan: my family live in Sydney so I would phone mum and tell her I wish I could fly up for Mother's Day but I'm just too busy at the moment (using all the amazing acting skills I learned in Theatre Studies at uni, that three-year arts degree finally paying off).

Then on Mother's Day I would catch an early flight to Sydney, head to the restaurant where my family were getting together for lunch, sneak in and pretend to be a waiter (using all the amazing waitering skills I learned after graduating from Theatre Studies at uni). Then I would creep up behind my mother and say, "Are you ready to order, madam?" And she would turn, scream with delight and I would be the highlight of her Mother's Day and the envy of my siblings, who would be sitting at the table, holding their presents in one hand, their receipts in the other.

The magnificent masterplan was activated. On the morning of Mother's Day I flew up to Sydney, caught a cab to the restaurant, then waited for my family to arrive, hiding behind a bin in a puddle of fetid bin goop. At exactly 12:30 p.m., right on cue, my family arrived and headed toward the restaurant – and at exactly 12:30 p.m., right on cue, a massive dog came over and started barking at me. I tried to shoo it away, crouching lower in the bin goop. Then the dog-owner spotted me behind the bin and started yelling, "DANNY!!! DANNY KATZ!!!!" – it was an old family friend I hadn't seen in years.

I said, "Shhhhhh! I'm hiding from my mother!" and he said, "Why? It's Mother's Day. Don't you like her?" Then the friend's little kid came running over, yelling, "DADDY!!!! WHO ARE YOU TALKING TO BEHIND THE BIN? DADDDDDDDDYYYY!!!!!!" Then the friend's whole family came over to see what was going on: his wife, his parents, his in-laws, all on a Mother's Day outing themselves.

Another failed present. The next day I was returned to Melbourne. This year, just sending a card. With a receipt.

Danny Katz is a regular columnist.

10/05/2019 Lifestyle Comments Off on Another year, another failed Mother’s Day present
Lifestyle