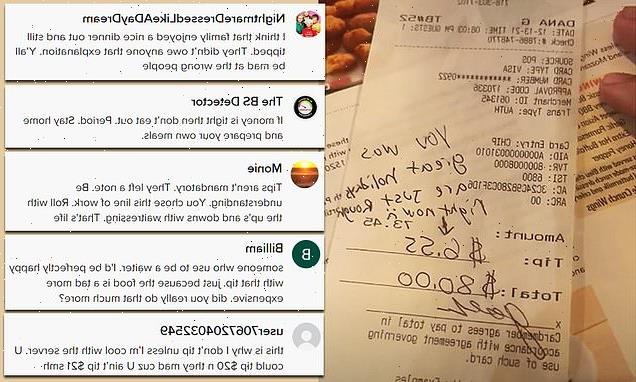 A diner who left a nine per cent tip for their waitress and explained that they couldn’t afford to give her any more money because times ‘are rough right now’ has sparked a major debate on social media.

The customer dined at an Applebee’s on Staten Island in New York City on December 13 and tipped just $6.55 on a $73.45 bill – which came out to about nine cent tip.

They also left a note on the receipt, writing: ‘You was great. Holidays are just rough right now.’

A video of the receipt, along with the note regarding the tip, was posted to TikTok by @kingj24__, and it provoked a fierce debate about whether or not consumers should be obligated to tip their waiters. 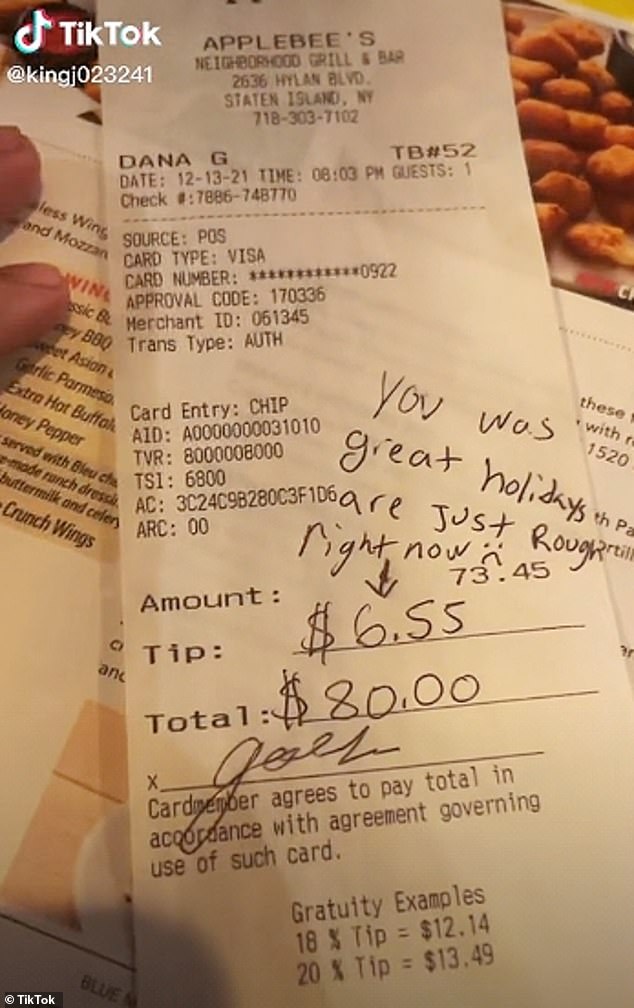 A customer at a Staten Island Applebee’s tipped $6.55 on a $73.45 bill, adding a note that the waitress did a ‘great’ job but they’re struggling financially

After the clip was uploaded online, it quickly went viral, gaining more than 700,000 views in a matter of days.

It created a massive argument among viewers, with some people claiming that if someone can’t afford to tip then they shouldn’t go out to eat.

‘If money is tight than don’t eat out, period. Stay home and prepare your own meals,’ one person wrote.

‘Anyone who says, “At least you got a tip,” or, “Be understanding,” has never waited tables. This customer wasted [the waiter’s] time when he could have done to-go,’ another added.

However, others defended the customer and slammed the restaurant industry for not paying their workers more.

Although it’s unclear how much Applebees paid this server, the federal minimum wage for tipped employees in the U.S. is $2.13 an hour, and it is customary to tip between 18-20 per cent.

‘Don’t blame the tipper, blame the establishment. These people shouldn’t have to rely on tips to barely make ends meet,’ someone else said.

Many people thought that the TikTok was posted by the waitress herself, a woman named Dana G., according to the receipt. That prompted some to bash her for seemingly putting the customer on blast.

‘What’s the point of feeling so entitled you had to publicly shame them because they couldn’t afford a better tip?’ one person asked.

‘Tips are voluntary not mandator,’ another comment read. ‘People know the job they sign up for doesn’t guarantee tips. What a sense of entitlement.’

‘Some people save up for weeks to take their family out for an “$80 meal” at least they left something,’ a different user wrote.

Someone else added: ‘Tips aren’t mandatory. They left a note. Be understanding. You chose this line of work. Roll with the ups and downs with waitressing. That’s life.’

‘This makes me really not want to go to Applebees,’ another person commented. ‘It’s a low tip, but it’s still a tip. Calling out customers like this is wrong.’

However, Dana insisted that she was not the one to post the video. She told the Staten Island Advance that she would ‘never shame anybody’ for giving her a small tip.

Many people thought that the TikTok was posted by the waitress herself, who was named Dana, and began bashing her – however she said she was not the one who shared the video

‘I turned the check in at the end of the night and went home,’ she explained. ‘Two days later I went food shopping with my children and my manager called and said, “You know anything about a receipt? It’s on TikTok and it has a lot of views and people are thinking it’s you.”‘

Dana, who said she is now ‘scared to go to work,’ continued: ‘I would never ever shame anybody for anything they’ve ever given me.

After conducting an investigation, the restaurant chain concluded that Dana was not the one to share the video online, and claimed she was the victim of a nasty internet prank.

‘It’s a joke that they’re playing on – not us at Applebee’s – but this poor girl Dana who’s been with us for some period of time,’ CEO and chairman Zane Tankel said.

‘She’s not a kid. She has two children. She’s a mother – a hard-working mother – and she remembers the guest well.

‘We talked to her about it. She remembers him well and she did not take umbrage or offense at that comment on the check.’