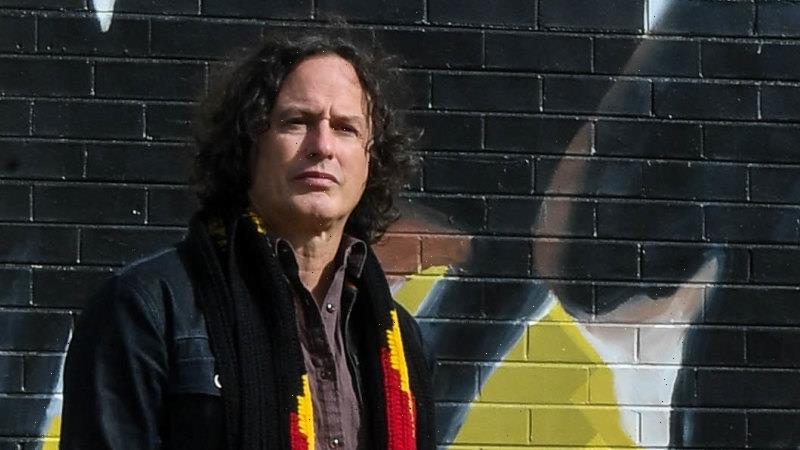 It’s not surprising so many Aboriginal creation stories include birds, says artist and Barkindji man Kent Morris. The oldest songbirds in the world – ancestors of pigeons, parrots and songbirds, including magpies – originated in Australia and populated the rest of the world. 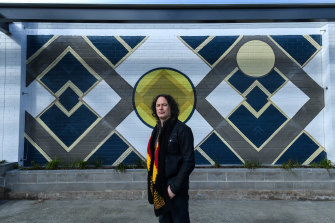 Artist Kent Morris in front of his new mural in Brunswick. Credit:Justin McManus

In one of the Dreamtime stories, the sky was so close to the Earth the birds couldn’t fly and humans had to move around on all fours. Magpies gathered sticks to raise the sky, which allowed men and women to walk upright – and them to fly. As they lifted the sky, the first dawn shone through and the birds sang to mark their achievement.

Morris says the story expresses the importance of each day, and underlines the impact of communal effort. As a metaphor, it couldn’t be more relevant to the times we live in.

“Each day comes and what might we do together … all of us looking after each other – no one gets left behind, everyone gets supported and has the potential to be actively and productively engaged,” Morris says. 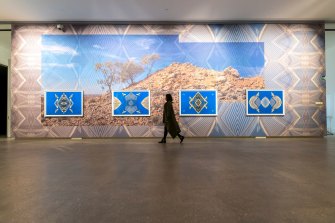 The Melbourne-based artist and descendant of the Barkindji people of north-western NSW has been creating art for more than a decade but his latest works are supersized. Birds are a constant refrain in his photography, which also uses geometric patterns and the built environment.

“The new works all link in some way to the cosmos, the galaxy, the philosophies, and our ongoing connection to the accumulated knowledge from time immemorial. It’s important we all understand we are a small part of something bigger,” he says. “That wonderful feeling, that humbling experience you’re part of and connected to this larger knowledge network of the universe.”

Represented by Vivian Anderson Gallery, Morris was inspired to create large scale works after a month-long residency at the acclaimed Kluge-Ruhe in Virginia in April, 2019. While in the US, he saw amazing native art, underscoring the breadth of storytelling by First Nations people. “Art is in an integral part of life in those centres.”

Originally a suite of eight images, Morris’ Barkindji Blue Sky series inspired a new video screening at UTS and Tarnathi, and a commission at TarraWarra. “Photography seemed to be the best medium to express these concepts,” he says. “For me, it was about walking on Country, I had to be out in the world, mainly listening and walking and thinking. Formulating those ideas and experiencing Country wherever you are.”

Visiting the place his father grew up near Burke in NSW, where his uncles and aunties were separated from their families, rounded up and sent away to a mission, he found little evidence of their existence. “When you feel like your culture is not represented you don’t feel included,” he says. “What was there were the beautiful native birds and the knowledge and wisdom of the old people, and the objects and belongings that had all these geometric lines and patterns that etched themselves on my soul.” 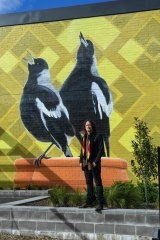 Morris began to see similarities between the resilience of his ancestors with the birds in the built environment. “Some have adapted better than others, this constant recreation, of ingenuity and resilience. Some have thrived and unfortunately others have not.”

Shot at a family reunion in Burke, New South Wales, the photographs have been enlarged and then flipped to mirror each other. While there, he heard “this mob of Corellas” and found them sitting on a huge power tower in the middle of the town. “I could hear and see it out of the corner of my eye, there’s an electric blue outback sky, the tower is imposing and the birds were plentiful.”

The next day he went back and waited for the birds to come: within five and a half minutes, he’d shot the series.

A six-time finalist in the National Aboriginal and Torres Strait Islander Art Awards, Morris is also head of The Torch, a program that helps Indigenous people in prison reconnect with their culture through art. 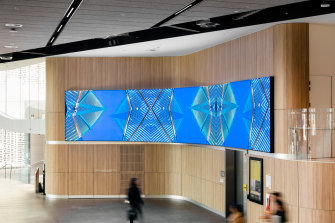 The UTS Art On Campus video on a 12 metre screen takes art to passers by in Broadway. Pictured is Morris’ Barkindji Blue Sky – Ancestral Connections #10, commissioned by UTSCredit:Jacquie Manning

The geometric design shapes and patterns in his work represent country and kinship knowledge and related totem systems, Morris says, and are inspired by the designs engraved on Indigenous belongings such as shields, boomerangs and possum skin cloaks from the south-east of Australia. “I also see them as representing interconnecting patterns and pathways affirming connection to community, culture and family.”

He has several large-scale installations on show around the country. At TarraWarra Museum of Art, Barkindji Blue Sky Ancestral Connections shows the birds on the tower and the Burke landscape behind them and measures 15 metres x 3 metres. It is one of nine new works by contemporary Aboriginal artists of south-east Australia in the Wilim Biik exhibition, part of the Yalingwa Visual Arts Initiative.

A 12 metre x 3 metre video screen on Broadway, part of UTS (also intended to be a projection as part of cancelled-VIVID) will now be shown at Tarnanthi at the Art Gallery of South Australia. The artist’s first foray into film, created with Jonathan Jones, it’s an animation of the corellas at the power station.

The just completed Garrong Park Mural in Brunswick features magpies and Morris’ trademark geometrics. It also references rope manufacturing, which occurred nearby. Called Ancestral Connections – The Ties That Bind, it measures 53 metres x 4 metres and was commissioned by Moreland City Council. Researching the concept, the artist found many mathematical problems whereby the rope didn’t end; the idea we’re all tied together dovetailed with themes in his earlier works.

Two of Morris’ early series will also be shown at Richmond Town Hall next month. The way the works hang, they are “integrated with that austere, colonial architecture”.

Morris’ work has a particular resonance as we confront climate change. “We are all bound together philosophically, the benefits of that interconnection, maintaining that balance, having responsibility but also respect for each other – and the environment. We need to do it together.”

19/08/2021 Lifestyle Comments Off on Artist Kent Morris looked for his ancestors: he found birds
Lifestyle