It should have been a relaxed day. Dean Beckman had taken his four-year-old daughter Nadia to the beach at their hometown of Portland, in Victoria’s far south-west, to look for cuttlefish.

However, as she was playing in front of a large rock wall that runs along the beach, a boulder tumbled out and almost crushed her. "I called her name, she went to the left and it fell to the right. I still get tremors thinking about it," said Mr Beckman. 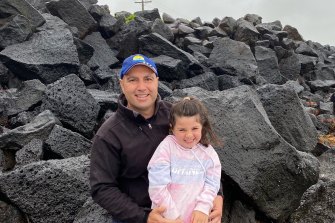 Dean Beckman and his daughter Nadia at the Portland beach where they had a close escape.Credit: Supplied

Concerned about how beach erosion was affecting the town's unstable rock wall and coastline, Mr Beckman and other locals formed an alliance that successfully lobbied the state government for action.

Two years on, more than 150 volunteers in local communities have been trained to pilot lightweight drones mounted with cameras along Victoria's 2500 kilometres of coastline.

The cameras produce three-dimensional beach models that precisely measure shoreline change as part of the Victorian Coastal Monitoring Program. These models can also be used to predict how beaches will respond to storms and rising sea levels during climate change.

The program is the first successful citizen scientist program in the world to explore the causes of shoreline change and is a finalist in this year's Australian Museum Eureka Prizes, Australia’s most comprehensive science awards.

"Beaches come and go, but we are trying to link what is happening on the beaches to climatology, to understand wave climate and how that is changing the coastline," said Daniel Ierodiaconou, an associate professor in marine science at Deakin University’s Warrnambool campus. 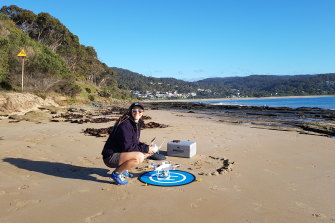