Treasurer Josh Frydenberg’s budget and the fate of the country’s recovery from the coronavirus recession will depend on consumers spending more than $130 billion of pandemic savings to offset the biggest one-year drop in government expenditure on record.

Amid warnings the Morrison government will ultimately have to lift taxes to cover the hole left in the nation’s finances by the coronavirus recession and its spending pledges, Mr Frydenberg will reveal on Tuesday how heavily dependent the economy will be on households opening their purse strings. 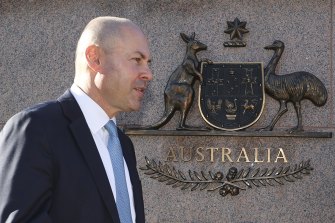 Treasurer Josh Frydenberg will deliver his third budget on Tuesday, with the swing from public spending to private spending pivotal to the post-pandemic economy.Credit:Alex Ellinghausen

There are already signs that after spending much of the stimulus showered on them through 2020, consumers are starting to run out of things to buy with the quantity of retail goods bought through the March quarter falling.

Mr Frydenberg will reveal a smaller than expected budget deficit for the current financial year and all the years out to 2024-25.

But the stronger-than-expected economic recovery from the recession coupled with soaring iron ore prices – which jumped by another 10 per cent on futures’ markets on Monday to a record $US225 a tonne – means a large improvement in the deficit. 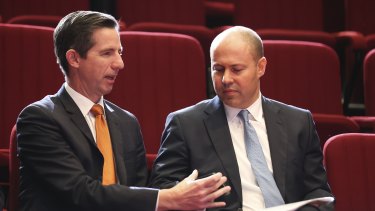 Based on the government’s monthly budget figures, the deficit will be up to $100 billion smaller in 2021-22 compared to the current financial year. That would be the largest contraction in a budget deficit on record.

Mr Frydenberg will argue that instead of hurting the economy, this large fall in government support will be offset by the households spending the savings they built up during the pandemic.

Total household bank deposits grew to more than $1.1 trillion in March this year, up a record $130 billion since just before the pandemic started in February last year.

The smaller deficits will translate into a lower-than-feared level of peak net government debt, which had been expected to reach $1 trillion early next decade.

Finance Minister Simon Birmingham said the government was expecting the private sector to underpin the economy.

“Our focus is very much on getting private sector economic growth to continue at the way in which it has grown,” he said.

AMP Capital chief economist Shane Oliver said the government’s plan was for the drop-off in government support to be offset by consumers dipping into their savings.

“That’s the big hope – that consumers buoyed by reopening and high levels of confidence draw down the build-up of savings over the last year and go out and spend, and that business investment also ramps up,” he said.

“In other words that the private sector largely takes over from the government sector in driving the economy.”

Mr Frydenberg has pledged to use the budget to help drive unemployment below 5 per cent, arguing a faster-growing economy will help drive up wages and ultimately repair the budget.

But chief economist with Macroeconomics, Stephen Anthony, said while the budget was improving in the short term, there was a reckoning coming that would have to be faced by the government.

He is forecasting the budget deficit to fall to $54.9 billion in 2023-24, but then to spike upward to $88.7 billion the following year as the government’s stage 3 tax cuts hit the bottom line. Extra spending around the National Disability Insurance Scheme and in defence also start to factor into the budget’s longer-term costs.

Mr Anthony said the surge in iron ore prices were papering over structural budget problems that would have to be resolved.

“At some point the Treasurer or his successors will need to undertake a fiscal repair job that is comprehensive, otherwise it will not close the structural budget deficit which formed from the mid-2000s as successive governments’ wasteful spending and tax cuts frittered away the windfall gains from the mining boom and subsequent housing boom,” he said.

The budget will upgrade forecasts for household consumption, based in part on the lift in spending expected to support the economy.

Data from the Australian Bureau of Statistics on Monday showed the actual volume of retail goods sold through the first three months of the year fell by 0.5 per cent. That followed a jump of 2.4 per cent in the December quarter.

Tune in on Tuesday from 6.30pm for our live coverage of the 2021 federal budget.

Latika Bourke will wrap up the latest news, analysis and reaction in our live blog. Watch the Treasurer’s speech live just after 7.30pm.

Our expert team, including Shane Wright, David Crowe, Peter Hartcher, Ross Gittins, Rob Harris and Jessica Irvine, will explain what the budget means for you, the economy and business.