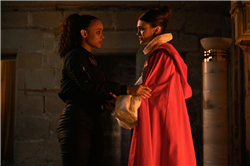 • Creation of the Spain Film Talent Network, placing special emphasis on women working in the industry.

• An overhaul of SFC’s website, updating content and formats and transforming the site into a transmedia platform.

• Promotion of the country as an international destination for shoots and audiovisual investment under the Shooting in Spain brand.

There is also a squeeze on talent worldwide. Growing a local talent pool creates more jobs and means flying in fewer technicians and other crew. “We don’t want to be a basic services industry, but a country whose talent counts in the decisions of producers who come here to shoot,” Rosado says.

The Spain Film Talent Network will not only showcase work but also “generate opportunities for networking and learning, create an additional training offer andassist in the search for internship opportunities,” he says.

Far more is at stake, however. Announced in March 2021, when Spanish Prime Minister Pedro Sánchez vowed to plow big money into the industry, the Spain AVS Hub plan is a milestone, “the first time that the world of culture has been incorporated in Spain into the axis of economic transformation,” Rosado says.

The idea for the audiovisual hub, presented by Rosado and former HBO exec James Costos to the government, was “an ideal of all the elements connected with audiovisual affairs uniting under a common strategy.”

The AVS plan encompasses Spain’s Ministry of Economic Affairs and Digital Transformation and its ICEX-Invest export and inward investment board, the Ministry of Culture’s ICAA film agency, Spain’s tax authorities and Ministry of Foreign Affairs.

Cooperation between the agencies is key, so the SFC’s transmedia platform will link to the Spain Audiovisual Hub website run by ICEX-Invest, and a new Shooting in Spain video, emphasizing its attractiveness for animation, post-production and VFX, is being made with ICEX-Invest.

Challenges remain. The SFC was instrumental in the approval of tax credits and introduction of rebates for international shoots in late 2014.

Approved in May 2020 after SFC lobbying, a spike in tax incentives, up to 30% from 25% of spend and to a $10.1 million cap per shoot, bolstered Spain’s competitiveness.

At March’s Malaga Festival, the SFC put out a call for the cap on any single shoot deduction to be raised to $30.3 million, in line with France. Spain already has spectacular locations, such as San Juan de Gaztelugatxe, immortalized in “Game of Thrones.” It has a deep talent pool. With truly competitive tax breaks, talks of Spain as a production hub in Europe is far from wishful thinking.