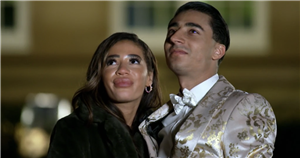 Celebs Go Dating star Whitney England has revealed that she is no longer dating Karim Zeroual because he started texting his ex-girlfriend.

The 26-year-old beautician from Manchester said she and TV presenter Karim, 27, became a bubble under lockdown rules after they left the Celebs Go Dating Surrey mansion in December.

However, the reality star beauty has revealed exclusively to OK! that he later started communicating with his ex again.

Whitney said Karim had returned to London for Christmas and she was later told by a mutual friend of the pair that the former Strictly Come Dancing 2019 star was “speaking to another girl”.

Speaking to OK! Online, she said: “I had kind of taken a step back because I didn’t have any information about it.

In text messages seen by OK! Whitney was asked by Karim’s ex if the reality show pair were still dating.

“She [ex-girlfriend] sent me all of the conversations of him telling her that he still loves her."

“Me and her had spoken and come to the conclusion that he is a bit of a snake.”

OK! Online has contacted representatives of Karim for comment.

Speaking about their break-up, Whitney said the pair “had to stay almost stay civil” because the show, which aired in February, was not out yet.

The CBBC presenter and brunette beauty appeared to hit it off from the start in the Mansion with Karim describing how he had started “following her around like a puppy dog”.

However the couple at one point had a heated falling out over fish fingers with Whitney telling a fuming Karim to “go suck a fart”.

Whitney described how the Mansion was “extremely” intense, adding: “I’m quite an emotional person anyway so anything that is intense for me I don’t deal well with it.

However she said dating on the outside would not have changed the outcome of her and Karim, adding: “I am a very passionate person anyway. I think with me it is all or nothing.

“It was a very intense environment but I am very much like that on the outside world. Once I meet someone, I am with them until they give me a reason not to be.”

Reflecting on her time in the Mansion, Whitney said she would not have dated any other celebrities but added that Tom Zanetti is “her type on paper” yet it would not have worked because they are “too similar”.

“Tom to be fair is my type on paper but me and him are quite alike in our lifestyles. We both party a lot and someone who is too like me is not something I look for in a relationship,” she explained.

Whitney continued: “Tom is actually quite a softy and my pre-conceptions of Tom were so completely wrong.

“I thought he was going to be a f***boy and only care about getting girls that are going to be fit etc but that couldn’t be further from the truth he is such a lovely, genuine sweetheart."