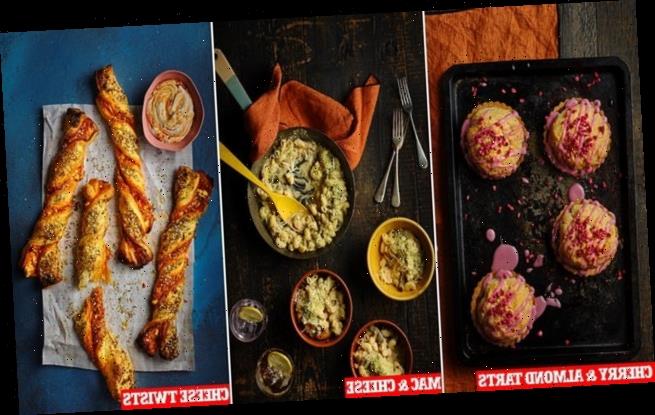 Two cooks who devise recipes to help cancer patients with taste buds dulled during chemotherapy have published a new book to help people battling one of Covid’s most unpleasant side effects – a distorted sense of taste, which can leave coffee tasting like ‘fruity sewage’ and a roast dinner ‘repulsive’.

Anosmia, a complete absence of smell and taste, has been widely reported as a common symptom of the virus but many, particularly those with Long Covid, have also said they’re experiencing parosmia, when flavour is drastically changed with foods including chocolate, roasted meats and garlic rendered ‘disgusting’ by the condition.

Ryan Riley and Kimberley Duke, both from Sunderland but now living in Brighton, have spent the last four months inventing and testing dishes that avoid ‘trigger’ ingredients for parosmia, after consulting taste experts including Professor Barry Smith from the Centre for the Study of the Senses and Dr Duika Burges Watson, from Altered Eating, which helps people affected by smell and taste changes.

The resulting cook book centres around recipes that focus on ‘umami’ – the savoury taste we experience when eating food. Foods rich in umami include mushrooms, tomatoes, Parmesan, soy sauce and miso. 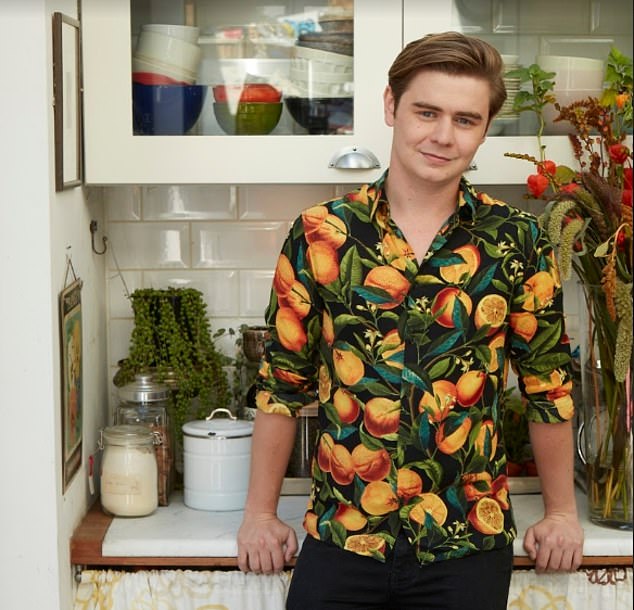 Kimberley Duke and Ryan Riley, pictured, founded Life Kitchen in 2017, offering cookery lessons to cancer patients with dulled taste buds. Last year, they were asked to adapt recipes for people with Covid and Long Covid who’ve been left with a distorted sense of taste. Their new free book of ‘safe’ recipes, Taste & Flavour, is published this month 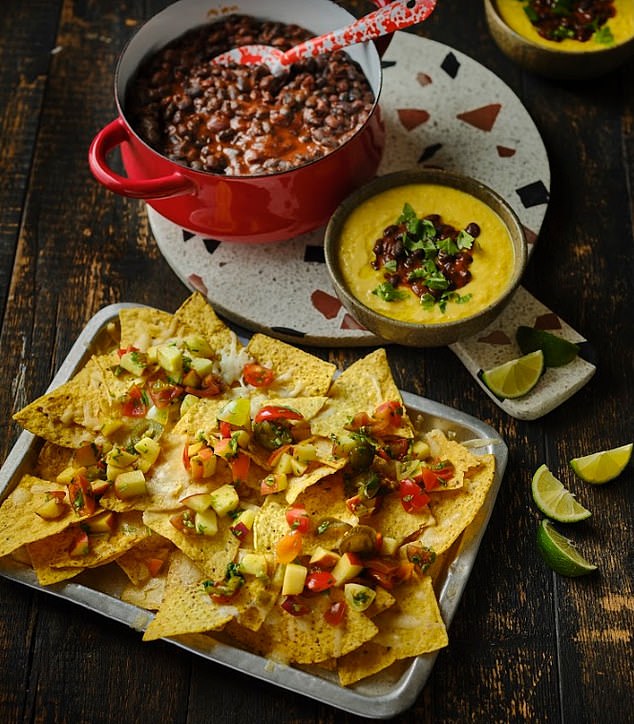 A zesty corn soup and spicy beans had to go back to the drawing board, says Riley, after the cooks tried to use sriracha – which contains garlic – and were told by testers with distorted taste buds that it tasted ‘horrible’ to them. Tabasco, garlic free, was eventually used to make it work 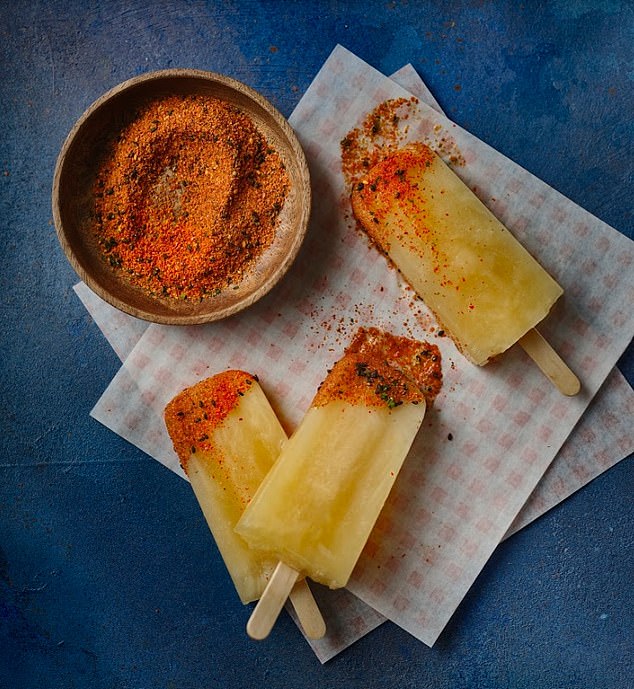 One of the recipes featured in Taste & Flavour: Apple and ginger lollies with shichimi togarashi dip. The book’s authors have tested recipes extensively on Covid and Long Covid patients reporting a loss or distorted sense of taste

Riley and Duke run Life Kitchen, a free cookery school founded in 2017 for people whose sense of taste has been affected by cancer. The idea was inspired by Ryan’s own ‘horrible’ experiences watching his late mother Krista be stripped of her taste buds after treatment for small cell lung cancer when he was 18.

In late 2020, as more and more cases of parosmia came to light, Riley and Duke decided to try and adapt some of their recipes for Covid patients.

The result, 12 ‘frantic’ weeks and several re-writes on, is Taste & Flavour, a free cook book that has seen Covid and Long Covid patients devoid of a normal sense of taste help them test dishes that people in the throws of parosmia can still enjoy.

Some recipes were quickly returned with a thumbs down verdict, says Riley. A zesty corn soup and spicy beans had to go back to the drawing board, he explains, after the cooks tried to use the hot sauce sriracha – which contains garlic – and were told by testers that it tasted ‘horrible’ to them. Tabasco, garlic-free, was eventually used to make it work.

Professor Barry Smith, who worked with Riley and Duke on the book, told FEMAIL that, for most people affected, normal taste will eventually return, and that food – including chocolate, coffee, roast meat and eggs – suddenly tasting very odd is actually a sign that taste buds are recovering. For some though, he admits, taste may never return in the same way. 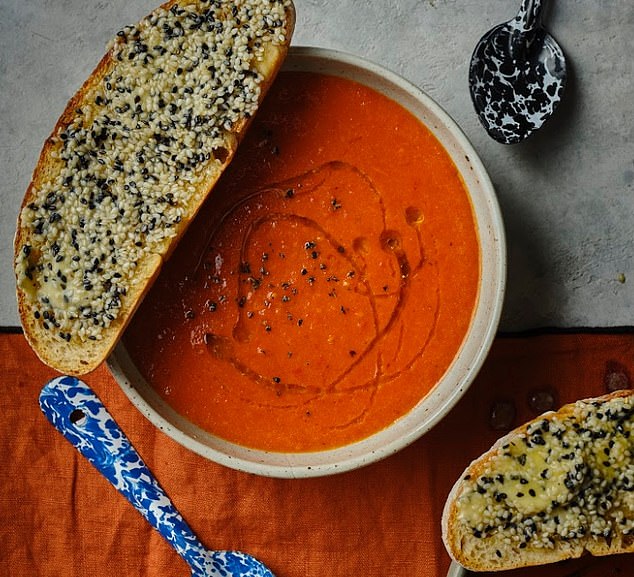 Fiery tomato soup with sesame seed butter toast: chilli can help people with parosmia, say taste experts, because the mouth’s TRPV1 receptors are super sensitive to the capsaicin in the pepper

He explains: ‘We know that lots of people have moved from having anosmia to having parosmia, a terrible condition that happens when the olfactory receptors are regenerating but the wiring is somehow faulty.

‘At this point, lots of familiar smells are now perceived as very distorted – and usually they taste disgusting.

LOST YOUR SENSE OF TASTE? TIPS FOR PACKING IN FLAVOUR

It’s non-triggering for people with parosmia and found in ingredients such as tomatoes, soy sauce, miso and Parmesan. Pair ingredients to maximise flavour 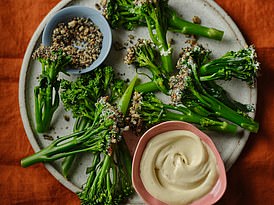 Enliven a dulled sense of taste by adding in different textures. Try to combine soft with crispy or crunchy with smooth to make food feel more appealing.

A dash of spice

Reach for the chillies; the mouth’s TRPV1 receptors are super sensitive to the capsaicin in the fiery pepper.

‘For example, people usually find coffee foul, the best description I’ve had of it is that it’s like “fruity sewage”, another said it “smells like a harbour at low tide.”‘

Riley says he and Duke started the project by devising recipes that eliminated ‘trigger foods’, things like garlic and onions, and focused on the safe taste known as ‘umami’.

He says: ‘Our taste buds can pick up five tastes: sweet, sour, salty, bitter and possibly the most important of our tastes, umami – it’s the savoury flavour that you taste in meat, soy sauce and miso, example.

‘There’s ‘synergistic umami’ too, where two types of flavours work together, with the most famous example being chips and ketchup – that’s basically a super umami. It also helps fire the other tastes so you get more chances to enjoy the food.’

The duo used ‘super umami’ combinations to pack as much flavour in as possible as well as using texture, temperature and appearance to make food appear more enticing.

The book, which cost £20,000, was funded by Sunderland City Council Covid relief fund and created in partnership with Greek and Mediterranean food supplier Odysea. It’s available as an e-book or there’s a £3 postage charge for a physical copy.

Ryan says the book being free is hugely important to himself his co-cook, Kimberley.

‘Life Kitchen classes have been free since day one.

When my mother was ill with cancer, if we’d have been able to go to a cookery class that was free, we would have gone to them.’ 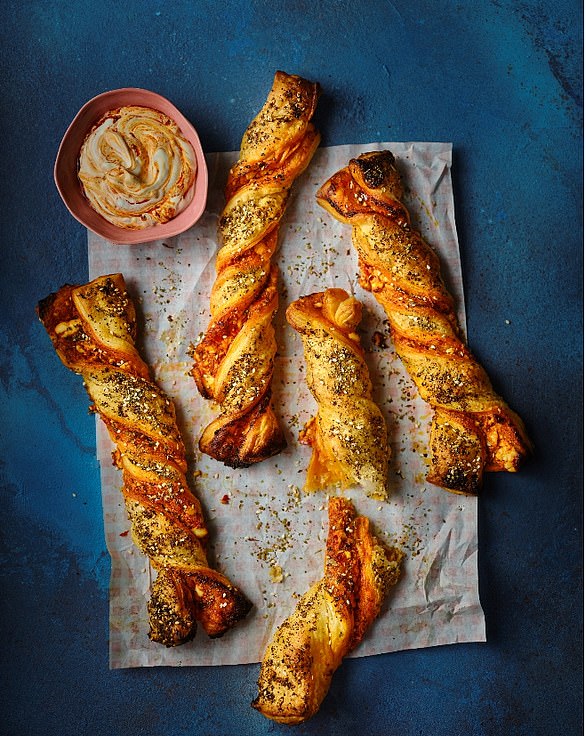 3 tablespoons za’atar, plus extra to finish

Unroll your pastry on to a baking tray, leaving the baking paper it’s wrapped in underneath. With a longest edge closest to you, use a sharp knife to slice the pastry sheet in half top to bottom.

In a bowl whisk together the feta, crème fraîche, chilli paste, chilli flakes and blitzed preserved lemons until combined. Spoon the mixture on to one of the cut pastry sheets and spread it out evenly using the back of the spoon. Place the other half of the pastry on top, and cut the pastry sandwich, top to bottom, into approximately 2.5cm (1in) strips to give 4–6 strips altogether.

Holding both the top and bottom of each filled pastry strip, turn one end a couple of times, until you get the signature twist. Return each twisted strip to the lined baking tray.

Combine the beaten egg and the za’atar in a bowl to create a wash. Brush the strips with the wash, then bake for 25–30 minutes, until crisp and golden brown.

While the twists are baking, make the dip by simply mixing together the yoghurt and chilli paste in a bowl. Remove the twists from the oven, then finish with an extra dusting of za’atar. Serve with the dip alongside. 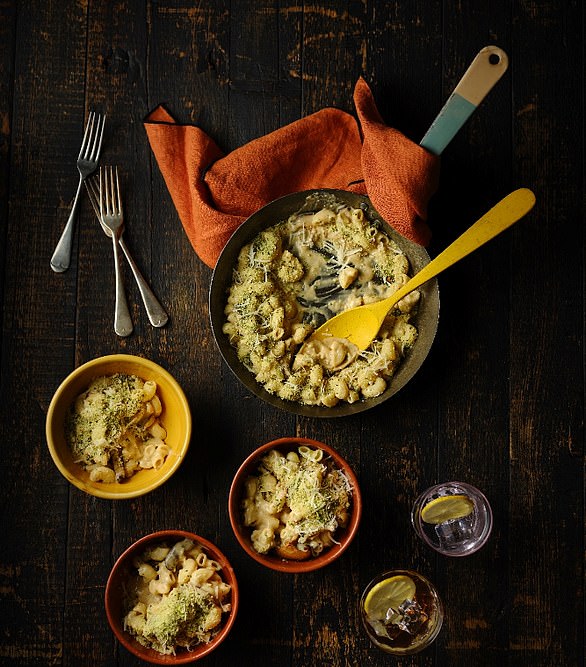 zest and juice of 1 lemon

2 slices of your choice of bread

First, make the breadcrumbs. Place the bread and the basil leaves in a food processor and blitz to fine crumbs. Tip the crumbs on to a baking tray and bake in the centre of the oven for 10 minutes, until golden.

Meanwhile, bring a large saucepan of salted water to the boil and add the pasta. Boil according to the packet instructions until al dente. Reserve a cupful of the cooking water.

While the pasta is cooking, heat the oil in a large frying pan over a high heat. When hot, add the mushrooms and pepper and fry for 5–6 minutes, until the mushrooms are golden brown.

Add the lemon zest and juice and cook for a further 1 minute to allow the mushrooms to absorb some of the juice. Add the béchamel sauce and cheese, then stir occasionally, until the cheese has melted.

Drain the cooked pasta and tip it into the pan with the sauce. Stir well, cook for 2–3 minutes, until the sauce has thickened around the pasta (add some reserved pasta water, if it’s looking dry), then serve sprinkled with the breadcrumbs for texture, and a little parmesan, if you wish. 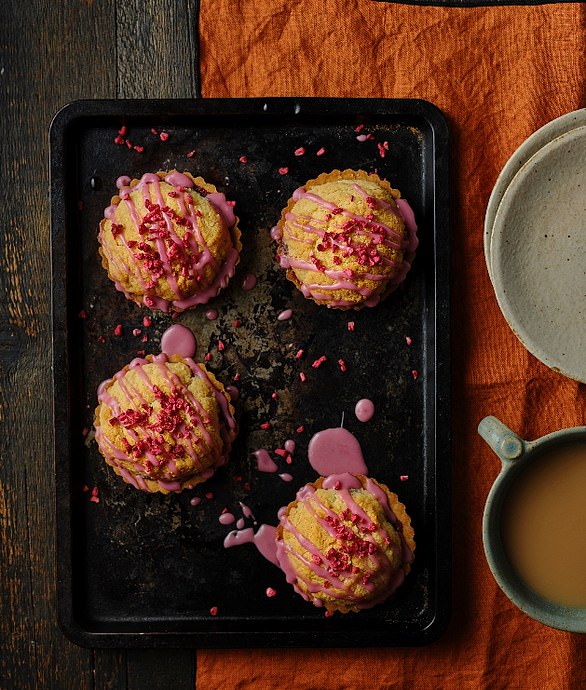 zest and juice of 1 orange

Place the cherries in a small saucepan along with the orange zest and juice, the caster sugar and the vanilla. Set the pan over a medium–low heat and heat through for 5–6 minutes, until the cherries are beginning to soften and the sugar has dissolved to form a syrup.

Meanwhile, in a bowl, stir the ground almonds and almond extract into the melted butter to form a paste.

Place the pastry cases on a baking tray and spoon an equal amount of softened cherries into each case, trying not to spoon in too much of the cooking syrup at the same time. Reserve the syrup.

Spoon 1 tablespoonful of the almond mixture on top of the cherries, using the back of the spoon to spread it out into a mound. Bake the tarts for 15–20 minutes, until the tops are lightly golden. Remove from the oven and leave in the baking tray until completely cool (about 15–20 minutes).

Make the icing. Tip the icing sugar into a large mixing bowl and spoon in 6 tablespoons of the reserve cherry syrup. Stir to a smooth paste and even pink colour. Using a teaspoon, drizzle the icing back and forth over the tarts. Finally, sprinkle with the freeze-dried raspberries, if using.